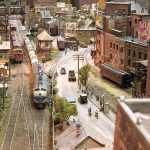 Model Railroading has long been a popular form of relaxation, enjoyment and creativity. Around the world it is safe to say that the number of people that have indulged themselves into the hobby at one time or another is over a million. Some are collectors of model and toy trains, while others love to watch their trains run on model train layouts varying from small to gigantic. Topping the list are those who take this hobby very seriously, raising their model railroad layouts to the level of fine art. The hobby attracts people from all walks of life, both famous and obscure. What started over a century ago has evolved far beyond what those early pioneers could have ever imagined. I can remember back when I was 7 years old taking used tin cans, removing the labels and using them as oil tanks on my American Flyer Layout. I also used drinking straws to recreate the piping system that went from tank to tank. Now, detail and realism has been taken to new levels, over and over and over again. Today, items can be bought from a hobby shop and placed on the layout with little or no work involved. And modelers themselves are constantly developing new techniques that take their model railroads to a new height of realism. Here at SMARTT, we recently built a highly realistic Faller Car road system with operating vehicles into a model railroad layout. This is a hybrid between commercially available components and our own techniques.

Over the years, the hobby has had numerous masters, from John Allen to George Sellios. It has also had its share of celebrity enthusiasts, Johnny Cash, Frank Sinatra, and Patrick Stewart, to name a few. Frank had his own train room at his Rancho Mirage compound in California. Lionel Trains even did a one of a kind piece for Frank based on his hit song “the A Train.” Both NBC evening new host David Brinkley and his successor Tom Brokow collected HO scale brass models. Baseball pitcher Curt Schilling had a very large brass collection and modeled the PRR and reportedly was considering building a layout to showcase it. Network television has also popularized model trains. Those of us over 50 can remember Gomez Addams blowing up his Lionel trains on the Addams Family TV show. Today, model trains are still making their way into primetime TV. From the show Two and a Half Men to Reverend Lovejoy on the Simpsons to the Big Bang Theory, all have regular or recurring characters with a train layout. As for the Big Bang Theory, Sheldon Cooper has fallen in love with three-rail model trains, and was quoted saying, “It’s O scale or no scale” in a recent episode, although the soulful allure of HO on his coffee table made him a quick convert to the smaller scales.

Rockers are no stranger to the hobby either. In fact, there are many big-name rockers out there that play with model trains. Elton John has a G scale garden layout. Phil Collins and John Bon Jovi are also involved in the hobby. Add in Who alums Roger Daltrey and John Entwhistle. The list goes on and on. But no one has risen to the heights of a master-class model railroader like Rod Stewart. In past blog entries we have written about Rod’s accomplishments as a model railroader; we have argued about Rod fitting into the category of being one of the truly great modelers in this hobby. No matter how you feel about his modeling skills and personal railroad empire, you must give Rod credit for building the vast majority of that layout himself. Rod truly had the money to have anyone build the Grand Street and Three Rivers model railroad for him. But he has shown us a model railroad that rivals the best out there that he built himself! Recently the BBC went to interview Rod Stewart at his Beverly Hills home for a documentary entitled, Can’t Stop Me Now, a story of his career and private life. When they asked him about filming his model railroad, he replied,

“There are very few places in my life that I like to keep private: that’s one of them, and another is soccer on Sunday morning. We sneak to the location and the team has never given me away. “

Rod takes his model railroading very seriously, he loves every aspect of it, and he went on to say in the above quote,

“ Every three years Model Railroader magazine puts me on their cover, which is better than Rolling Stone.”

Wow! I remember when I found out back in 2006 that I was quoted in a Rolling Stone article how excited I was. Now Rod has gone on record saying that MR has overtaken Rolling Stone in his priorities!  I haven’t made MR yet, but SMARTT  has; we were featured in two back to back issues in summer 2003 about our building a substantial portion of the new Chicago Museum of Science and Industry HO layout.

After reading the story about Rod Stewart in MR, I began to think back to when I first heard his music and where I was in life. Maggie May and You Wear it Well immediately came up, so did high school, two young woman, rock music and model railroading.