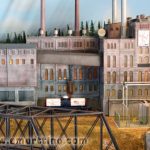 All I needed was a friend to lend a guiding hand
But you turned into a lover and
Mother, what a lover, you wore me out
All you did was wreck my bed
And in the morning kick me in the head
Oh Maggie, I couldnt have tried anymore
You lured me away from home, cause you didn’t want to be alone
You stole my heart, I couldnt leave you if I tried

By 1972 Rock Music had lost three of its biggest performers, Jimi Hendrix, Janis Joplin, and Jim Morrison. The dominant songs that year included Neil Young’s Heart of Gold and Rod Stewart’s You Wear it Well. I still favored Rod’s 1971 hit, Maggie May. Also, this was the year that folk singer Arlo Guthrie released City Of New Orleans, a song about the train not the city. In model railroading, John Allen’s Gorre and Daphetid was transforming model railroading into a art form, and Ross Petrie’s article on how to scratch-build a brewery appeared in Model Railroader. That building would inspire Heljan to release the very first large HO scale industrial structure as a plastic kit, 26”x 7 5/8” x 22” tall. The kit is still available today as Walthers # 322-807. Ross, a Master Modeler in the NMRA, lived in Fort Lauderdale and sold me my first PRR passenger train in HO scale, 8 Rivarossi cars with two E-8 locomotives. As for the brewery, I have used that Heljan Brewery kit in numerous kit bash projects, both here at SMARTT and at home. 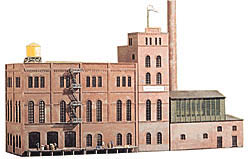 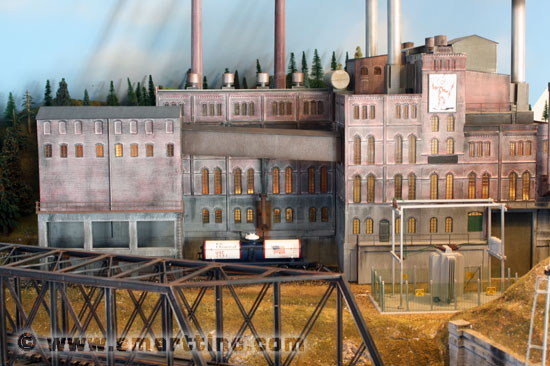 Here is an example of one kitbash project that I did here at SMARTT  using the above Heljan kit. We used three kits for this powerhouse in O scale. As you can see, the Heljan kit can easily be made into a large O scale structure. Even though it sells as an HO kit, it does supply both HO and O scale doors. Photo SMARTT.

Also in June of 1972, I graduated from South Broward High School in Hollywood, Florida. Model railroading was a big part of my life, I had already been a member of the Lauderdale Shore Line MR club for two years and would became a senior member on my 18th birthday in September. I had sold off my American Flyer S gauge trains and started a collection of HO Pennsylvania models. I loved baseball (Yankees), Gail (girlfriend), and politics. I worked at Shores Drug’s in Hollywood, where I met a crazy young woman named Janice. Janice loved practical jokes and was extremely beautiful, tall with olive skin. On graduation day, Janice (a junior at South Broward) tackled me as I was in the Graduation procession walking out of the auditorium. As I looked up at her from the floor she yelled “Happy Graduation, Ray!” I have not seen Janice in person since that night, however, while sorting magazines at my job in the Hollywood Post Office in 1975, I discovered Janice on the cover of Mademoiselle. She had become a true super-model and was seen in every fashion Magazine from Vogue to Cosmopolitan. Recently she had her own TV show on the E! network, it was called JD; her full name is Janice Dickinson.

Being a 17 year old model railroader was something that was not part of the “in-crowd” scene at South Broward (neither was Janice, she hung with us rebels). A lot of the jocks loved to harass me about it. I do find it interesting that 42 years later so many rockers, athletes,  and TV and movie personalities have joined the ranks of our fraternity, or been revealed as members all along. As we know, Neil Young went on to join Lionel and even released a series of freight cars bearing the name of his record company, Vapor records. Neil’s latest endeavor with Lionel is the Neil Young Signature Line; it combines Lionel Classic F-3 diesel locomotives and passenger cars with the latest model railroad electronic technology. Also, two musicians from the Who, Roger Daltrey and John Entwistle have model train layouts.

As for the baseball jocks at South Broward, Joe DiMaggio collected Lionel trains, and their former coach Ken Sergeant, is now the president of the Florida Citrus Model Train Society. His wife and member of the FCMTS, Saralyn Sergeant, and a former student from South Broward is still a close friend of Janice Dickinson. As for Janice, she was recently in attendance at a major fashion show in Manhattan along with Rod Stewart. I wonder if Rod ever invited her over to see his model railroad.

Does the devil wear Prada? I don’t know, but SMARTT did a small model train display for Mark Jacobs that featured a volcano with working lights and smoke. It was on display at their Greenwich Village Boutique for over a year. 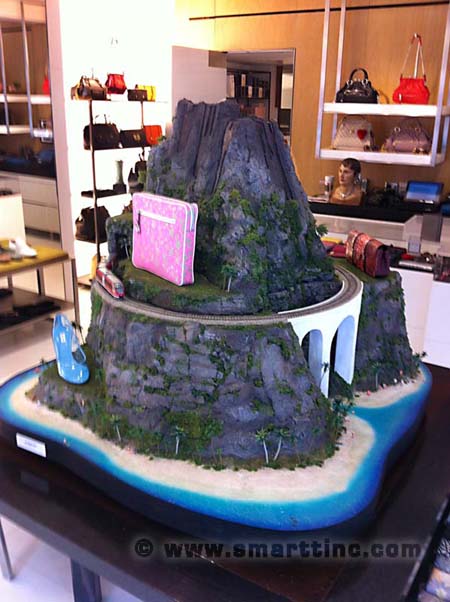 The Mark Jacobs display in Greenwich Village. Photo by SMARTT

The latest that we have on Rod Stewart’s model railroad is that MR has just released another spread on his layout. This is the third time he has been featured in MR. In the last issue’s track diagram it showed a place for a future steel mill and coal mine. It will be interesting to see if the mill and the mine have been built. It also showed he has plenty of space to expand in the staging room, that space is roughly 70’ x12’.

Time has shown that model railroading is a really great hobby that is fun and that brings relaxation and enjoyment to the whole family. It is also a hobby that attracts people from all occupations and interests. Try it. You’ll thank me later.