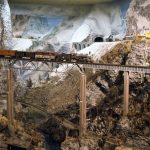 With this year being the 100th birthday of John Allen, we want to go beyond just our recent paragraph in the “In the News” segment of our newsletter and focus on this master craftsman whose name is almost synonymous with Model Railroading.  John has had a major influence on this hobby, and SMARTT is certainly no exception. Michael Hart, who is the president here at SMARTT, credits John as an inspiration. Many of the bridges that Michael has designed are based on or suggested by John Allen’s model designs.

Before we go any further, let’s give a short background on John Allen and his model railroad, the Gorre and Daphetid (the G&D). John was born in 1913. His first exposure to model railroading was at the 1934 world’s fair in Chicago. By the 1940’s he was a full-blown model railroader, and in 1946, his first model railroad version of the G&D was built. In 1954, the final version of the G&D was started in his house in Monterey, California; this would end up taking up 1200 square feet. John’s expertise in the hobby spanned almost everything, including locomotives, rolling stock, structures, and scenery.  John was also a very accomplished photographer and skillfully recorded his layout on film. John loved the more whimsical side of model railroading and set aside prototypical concerns. Sadly, John died of a heart attack on January 6, 1973. 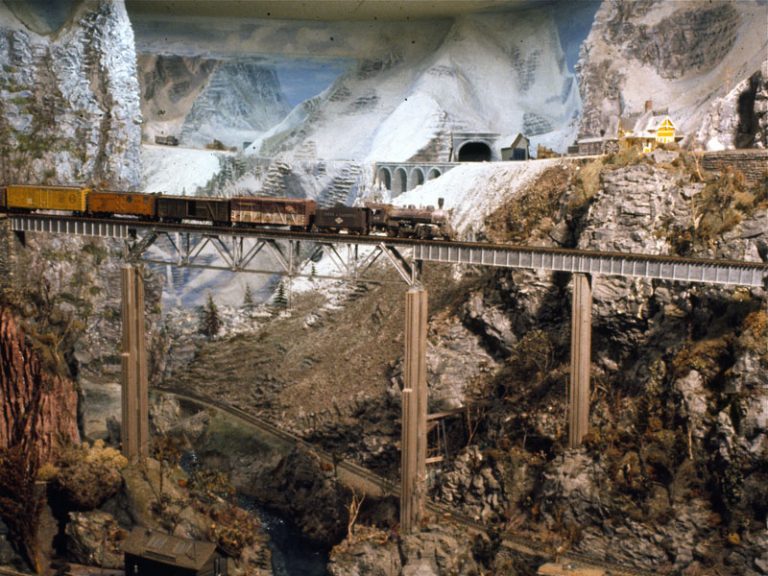 Here is one of John Allen’s signature bridges; we’ve used this style on several layouts.
Photo, by Doug56.net.

One of John Allen’s best-known trademarks was his huge bridges that spanned vast canyons or valleys.  Of course, those valleys and canyons themselves were a John Allen signature item. John introduced scenery that stretched down to the floor and as high as the ceiling in some places. John also pioneered using large structures in city scrapes; these were all built before the days of readily available plastic kits from the likes of Bachmann, Walthers, DPM, and others.  In fact, several of his structures have inspired these manufactures’ releases, including several of George Sellios’ Fine Scale Miniatures kits. These kits were copies of John’s structures. Today, many of these FSM limited run kits are considered collector’s items, and they sell at many times their original price.

Here is an example of a George Sellios FSM kit that was dedicated to John’s Gorre & Daphetid RR. Today this kit sells for over $400.00, photo FSMkits.com.

George Sellios is only one of several model railroad masters who were influenced by John Allen; in fact, the Franklin & South Manchester is based on John’s whimsical approach to model railroading over being prototypical.  We would later see many of these techniques on the layouts of today’s masters.  Howard Zane credits John Allen all the time; anyone who has visited Howard’s layout will see numerous tongue –in-cheek  scenes reminiscent of John’s own sense of humor. The transient hotel complete with “Livestock Welcome” billboard is so John Allen.

John Allen can even claim to have influenced rock music legend Rod Stewart’s model railroading style. Rod’s layout has several features that are immediately reminiscent of the Gorre & Daphetid. Rod’s massive city may give some insight into what the G&D might have looked like if it was still around today. Most importantly, we can marvel at what John accomplished when so little was commercially available to the hobbyist at the time he built the G&D.

We have discussed a few of John’s innovations that he introduced to the hobby on the G&D, but there are more, too many to include here. There are, however, two ideas that I do want to mention here. One is the use of mirrors to give the illusion that the scene continues into infinity. Second is the depiction of an underground subway below his city. Both have been used extensively here at SMARTT; in fact, Subways are a popular feature that we offer to our clients. 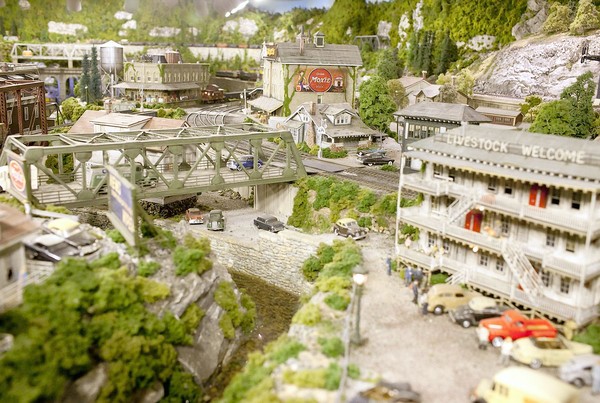 Here is a photo of Howard Zane’s Piermont Division model railroad. Note the “Livestock Welcome” billboard atop the transient hotel on the right; again it is SO John Allen! Photo Baltimoresun.com 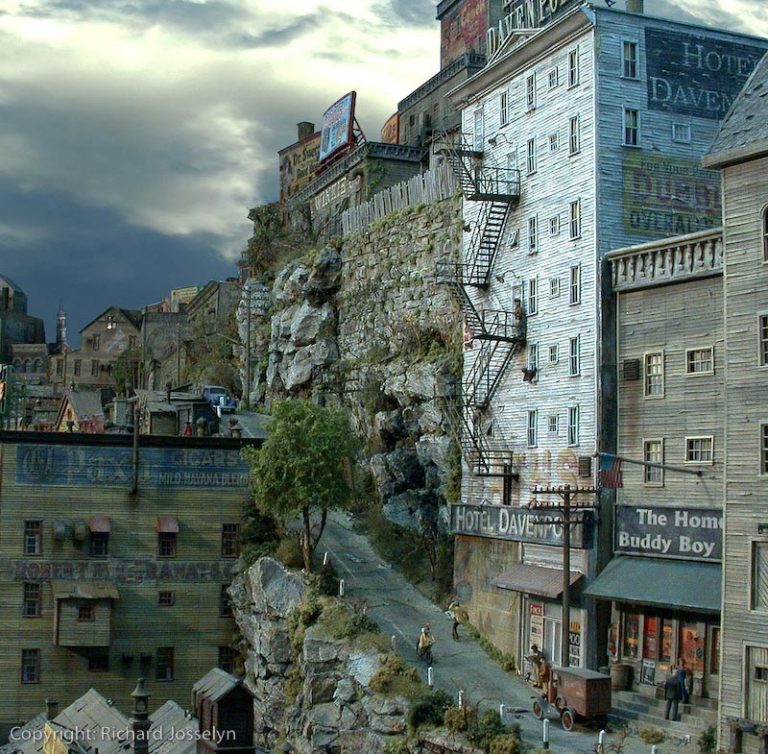 Here we see the definite John Allen influence on George Sellios’ Franklin & South Manchester. The big difference here is that today’s model railroader has so much more commercially available from kits to prefab scratch-building parts. What would John’s layout look like if he could have lived into the 1990’s or beyond? Photo by Richard Josselyn from Railroad-line.com. 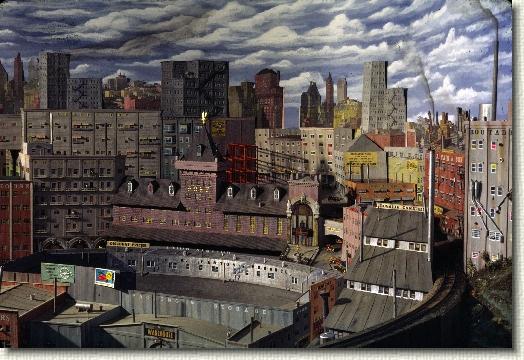 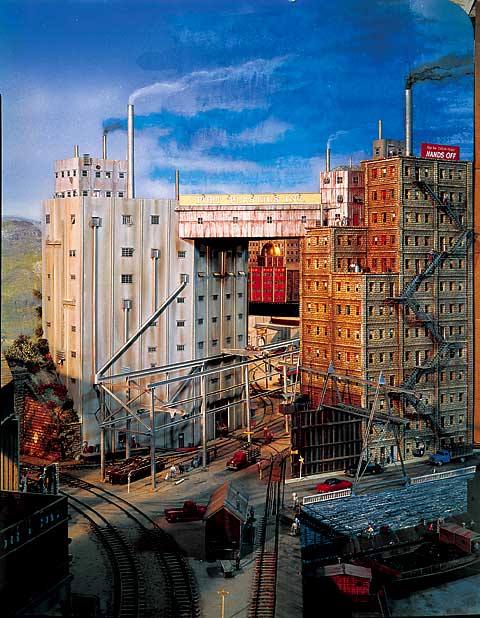 Two views of John Allen’s city of Port, these images give you a great example on how far he was ahead of his model railroaders, and how he influenced those who came after him. Top photo, ogaugerr.com, bottom Greatesthobby.com 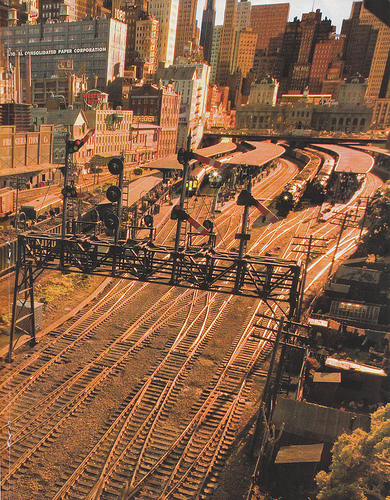 John pioneered many model railroad techniques that influenced others in the hobby. Cityscaping was one area. Here we see John’s influence on Rod Stewart’s Three Rivers model railroad,
Photo Staticflickr.com

Over the decades, John has been a major influence on the hobby; he has been no less here at SMARTT. John’s innovations paved the way for both the hobbyist and the model railroad industry. John even did a series of advertising photos for Varney model trains. The Gorre & Daphetid was used as the platform to promote Gordon Varney’s model trains in Model Railroader magazine. To us in South Florida, Varney had a special connection, as it moved from Chicago to Miami in 1955. Throughout the years, manufacturers have produced replicas of various G&D rolling stock as well structures, Sellios’ FSM kits being just one example. Even though John Allen died in 1973, and his house containing his masterpiece layout burned to the ground 10 days later, his legacy continues and endures, and will continue to be an inspiration and a goal to reach as long as the hobby of model railroading exists. 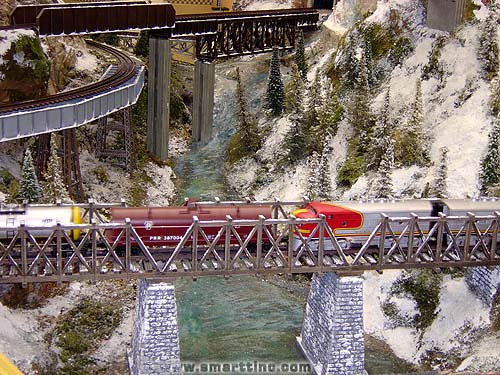 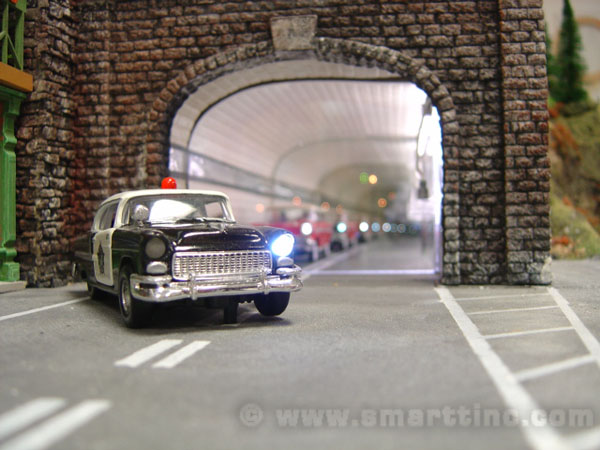 Two examples of John Allen’s influence here at SMARTT. Networks of intercrossed bridges were a John Allen hallmark. Allen loved the creative use of mirror illusions. Photos by SMARTT inc.