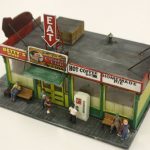 ADDING A STORY TO YOUR MODEL RAILROAD

Here is a fun way you can enhance your model railroad and use your creative writing skills at the same time. Create stories around your model railroad by writing about it and then printing them out as handouts for your guests.  This can be very useful when you decide to invite your friends over for an operating session or open house.  You can write a story about your inter-model railroad, a story on how it came into existence. This could be the real life story of how it was built, or it could be a fictitious story describing your railroad layout as a real railroad. Another subject would be to write about specific parts of your layout, such as structures, vignettes, trains, and scenery. So if you have creative writing skills, now is the time to incorporate them into your train layout.

I will demonstrate how you can have fun by justifying a specific part of your layout, in this case a diner that is part of a custom kit-bashed brewery I am currently building. By using a creative story I can now justify why this little diner is right next to this large brewery. The diner is a modified version of a Bar Mills model kit, Sweaty Betty’s Diner. More about the kit and how I modified it after the back story of the diner. 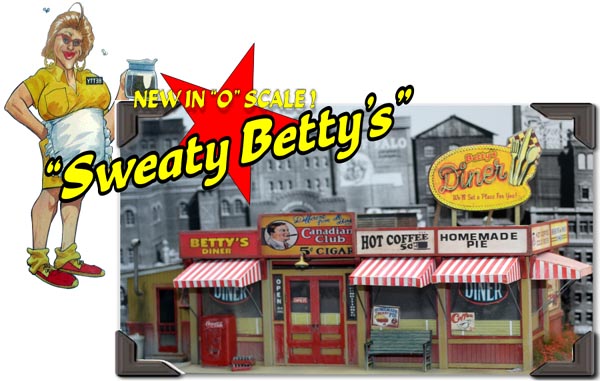 Betty’s Diner: the Back Story

The Anheuser Busch Brewery that I am modeling employs about 350 people on three shifts. Other than a break room with vending machines there is no other place within walking distance for the workers to eat. The little diner located next to the brewery, closed down a year ago when the leasers decided to retire. Since then no one else has come along and offered to rent the place; the Anheuser Busch Company owns the building.   Then one day along came Jack and Betty Quinn, a married couple with many years of experience in the diner business. After trying their hand at retirement, Jack and Betty decided they would not stay married very long unless they got back to work, so they approached the brewery about the diner.

Anheuser Busch was more than happy to have someone wanting to reopen the place. Since the diner closed down there has been a lot of grumping around the brewery about food.  So the plant manager sat down with Jack and Betty and worked out a deal. The contract was simple, no alcohol (including beer), they must stay open 24/7, and workers who brought their own lunch could hang out outside the diner and eat there. Jack and Betty agreed.

The very next day they went to work on cleaning up the joint, not a very easy task for the previous proprietors had left the place a mess. A new grill and refrigerator were bought, as well as new tables and chairs. The place also got a new coat of paint, both inside and out. The next step was the menu, nothing fancy, just good old fashion comfort food. Breakfast, lunch, and dinner, 24 hours a day, 7 days a week; they would always be open, except on Christmas. Here is a sample of the food that would be served.

Lunch and dinner: hamburgers or cheese burgers, toasted cheese, BLT, tuna or Chicken salad sandwiches,  roast beef or turkey sandwich (hot or Cold), coffee and the soup of the day!

There was also a daily special: pot roast, meat loaf, chicken-pot-pie, Salisbury steak, corn beef & cabbage, and on every Friday; fish. This was back in the day when eating meat on Friday for Catholics was forbidden, and Jack and Betty are very strict Irish Catholics, so their diner follows suit.

There was one added feature to the fare at Betty’s, during the summer months. Jack made a deal with a local gentleman, Smokin’ John (named in honor of Smokin’ Joe Frazier), who had a mobile BBQ smoker and a reputation of the best BBQ in the neighborhood. Smokin’ John would drive his BBQ smoker around the neighborhood   and set up on Thursday, Friday, and Saturday selling BBQ. Now John had another stop, at Betty’s every Wednesday. John and Jack printed a special BBQ menu and served up John’s cooking inside the diner. John would park his smoker right next to the diner in the loading dock parking lot. All one had to do is look at the workers on the dock the day that John was set up to see that there would be a long line at the diner that afternoon.

As previously stated the diner was right next to the brewery, in fact it was just to the right of the delivery truck loading dock and right in front of the coal car siding for the plant’s boiler house. Being near the loading dock also added to their clientele; many a truck driver would tank-up on food and coffee while they waited for their trucks to be loaded. Jack and Betty loved their new diner and so did all the employees at the brewery. So if you’re down in the flats and drive near the Anheuser Busch brewery, do yourself a favor and stop by Betty’s for breakfast, lunch or dinner, and if it’s the summer time don’t forget Wednesdays.   There is public parking along the street that parallels the railroad’s coal car siding. The bean soup is a killer! 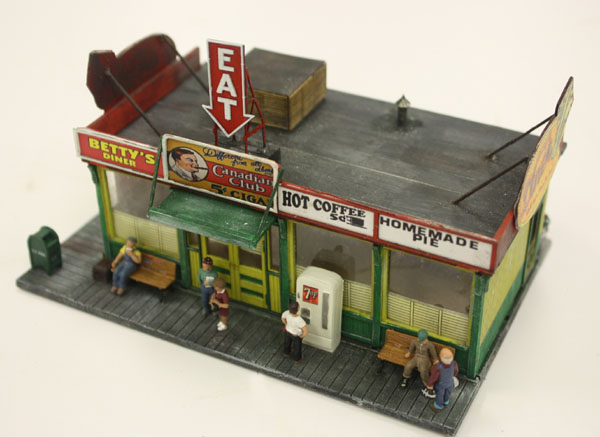 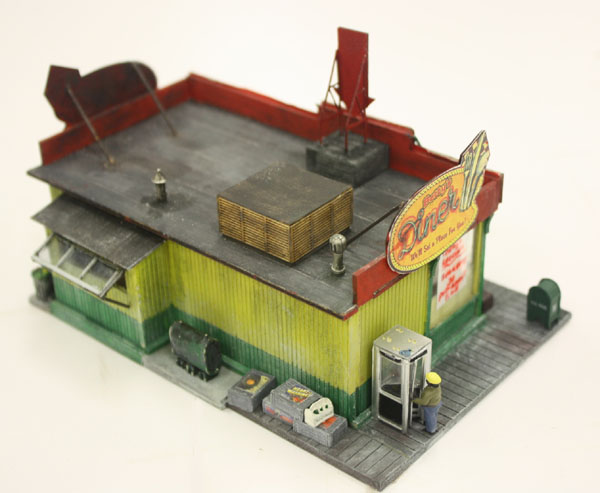 Building Sweaty Betty’s was just as much fun as writing about it. Art Fahie and the team at Bar Mills Scale Model Works came up with a very nice little model kit here. My kit was the HO version, they also make an O scale and S scale version, and it is so nice to see good model kits like this being made for the Model Railroad hobby in S scale.

I modified the kit only slightly, shortening it by leaving off the kitchen outcropping on one end. I added a shortened version of the kitchen to the rear; this was done in order for the structure to fit the space I had. Other changes included roof top signs.  I modified the stand alone roof top sign included in the kit as end mounted signs located at both ends. I also added a Blair Line roof top “EAT” sign over the front door. This sign has the word EAT spelled out vertically inside of an arrow pointing downward, perfect for the entrance way. I also varied the colors choosing green, yellow, and red as the main colors. I left off the window awnings.  I finished the detail with figures, a phone booth, produce crates, a mail box, and garbage cans. The screens for the side door and the kitchen window were a nice feature of the kit.

I liked this Bar Mills kit so much I went and bought another, The Gravely Building. This will soon be my Skid Row Mission, so look for my story on how I combine a typical skid row mission with a Catholic Worker hospitality house and Star Trek. Yes, Star Trek, hint remember the episode with Joan Collins; does anyone make 1/87 figures of Kirk, Spock, and McCoy? 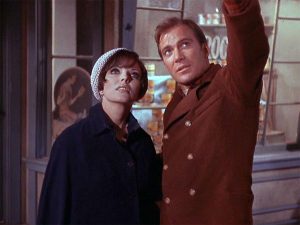