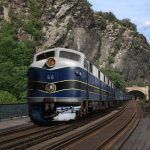 February is still winter in the Northeast, but it does mean that spring is one month closer. Here in Florida the first sign of spring does not come from the first buds appearing on the trees but the words, “pitchers and catchers report!” Yes, believe it or not spring training is only days away, and that means Opening Day up north will follow soon.  Spring in the Northeast is getting closer, and spring is a great time to get your camera and go out railfanning again; so let’s take a look at one of my favorite locations to railfan in.

Since the Baltimore & Ohio Railroad was featured in our newsletter about the game Monopoly in a short piece on the Brunswick Railroad Museum trying to save the WB tower, here are my personal experiences with the B&O on the old East End. One of my favorite all time railfanning locations, spring, summer, or fall, is the B&O mainline between Point Of Rocks, MD and Harpers Ferry, WV. We will now take a look at the B&O on this stretch of railroad both past and present.

Let’s first do a brief history of this portion of the B&O. The B&O built the original line from Baltimore way back in the middle 1800’s; the new main from Washington, DC opened in 1873. In 1972 the B&O railroad joined with the C&O (Chesapeake & Ohio) and Western Maryland Railroad to form the Chessie System Railroad. The Chessie System would eventual merge with Seaboard System Railroad to form CSX, hence the C (Chessie) in CSX. With the breakup and sale of Conrail in 1997 between CSX and Norfolk Southern, the CSX system got even bigger. One of the most important events that affected this line in the last decade of the 20th century was the closing of Potomac Yards in Alexandra, VA. This helped to revitalize the importance of the former B&O yard in Brunswick, MD. 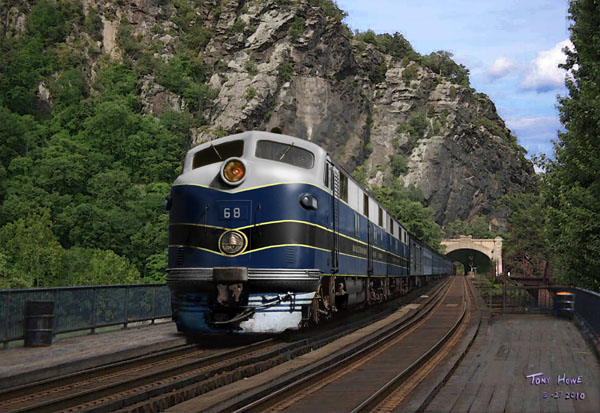 Passenger service was and is an important part of this railroad. Back in the glory days of first class passenger service, the B&O was outperforming the PRR in service between Washington, DC and the cities of Chicago, Cincinnati, and St Louis. The Capital Limited,National Limited and the Cincinnatian were the flagship trains of the B&O fleet, and they all operated over this section of the B&O. Today, MARC (Maryland Area Regional Commuters) operates through to Harpers Ferry and Amtrak’s Capital Limited runs daily between Washington, DC and Chicago, IL.

One of the best known small town railroad stations in the US is the B&O station at Point Of Rocks MD. Here is where the old main (Baltimore) joins with the new main (Washington DC) and heads west to Cumberland, MD. The station has been reproduced in several different forms, including a limited edition HO model by Model Tec Studios back in 2006. As you can see in the below photo, the station is nothing less than majestic. 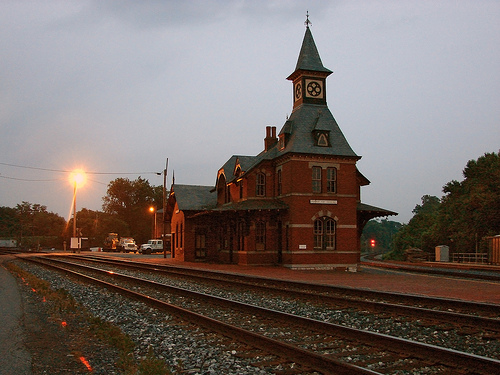 Point Of Rocks, note the Baltimore line is on the left and the DC line is to the right. Photo Albino Flea on Flickr

The two mains that converge here are very important in today’s CSX operations. The New Main is CSX gateway to the South by way of the former RF&P mainline from Washington, DC and Richmond, VA. The Old Main connects with CSX main line to Philadelphia and New York by way of Baltimore. Trains rolling west go on to Cincinnati, St. Louis, Chicago, and Kansas City. Coal is still a major commodity on this line, with the port of Baltimore being a major destination for coal trains carrying coal to be exported overseas. Containers are also very important with many trains pulling double stacks. All tracks through the tunnels on the line have had their alignment adjusted to allow for the operation of double stacks through them.  Just to the west of the station is the Point Of Rocks tunnel, with a unique brick portal for the westbound main line while the east bound main hugs the bank of the Potomac River.

Point Of Rocks offers many different photo possibilities for both the station and the tunnel. The station is photogenic from all sides, three of which can easily be framed with trains in them. The east portal is very close and one could also get shots on the daylight track along the Potomac River. There is an abundance of trains here: MARC, Amtrak, and plenty of CSX freights. (For modelers, this is a perfect size station for most layouts; you may want to try eBay for the Model Tech kit.) If you were coming from the east this would be the place to start your railfanning.

Brunswick became very important to the B&O in the last decade of the 19th century as a major classification yard. A six mile long yard was constructed along the banks of the Potomac River beginning in 1891; it was completed in 1912. By the 1950’s the yard began to lose its importance as a major classification yard on the B&O, with Cumberland, MD and Pot Yard in Alexandra, VA doing the bulk of the work. The closing of the Old Main to Baltimore after the floods of Hurricane Agnes in 1972 further reduced the importance of the yard. The Old Main was closed for several years after the flood, but was reopened and re-signaled after being dark following the initial reopening of the line.

As previously stated, with the closing of Potomac Yards in the early 1990’s, the yard at Brunswick reemerged in importance. One important aspect of the yard is that it serves as a holding point for freight trains during the peak periods of commuter operations on both the Old and New Mains. Brunswick is still a crew change point for CSX freights and the town has facilities for resting and feeding crews as the layover for their next assignment. Numerous freights roll in and out as well as through Brunswick every day, making it an excellent railfanning location. 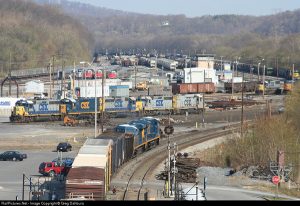 Brunswick has also become very important to MARC (Maryland Area Regional Commuter) operations in the area, as it is the major service facility for trains running as far west as Harper Ferry and Martinsburg. MARC took over the commuter operation of Chessie System in 1975 and Conrail in 1981. Over the years it has expanded to reach as far as Martinsburg, WV and for special occasions all the way to Cumberland, MD. 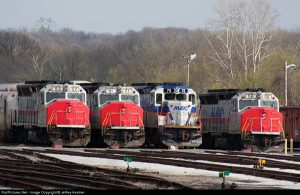 MARC trains lined up at the Brunswick MD service facility Photo by Jeffrey Kestner on railpictures.net

Brunswick has several opportunities to take photos of the same MARC, Amtrak, and CSX trains that run through Point Of Rocks. However, this is a busy railroad yard, so DON’T wander on the property without permission! Brunswick also is a good place to go for beans, including a beanery (Green Country Inn) for the railroad crews that is also open to the public. There is also a nice little railroad museum, the Brunswick Railroad Museum that is open Friday, Saturday, and Sunday. It features a rather large HO model railroad that depicts the B&O/CSX railroad in the area.

“Going for Beans:” going for food, breakfast, lunch, or dinner. I once witnessed a CSX coal train on the old AB&C at Ideal, GA stop his train on the main line and go for beans at a local eatery. They spent at least a half hour eating. I did hear him get permission “to go for beans“  from the dispatcher to do it, however, he did block a local grade crossing.