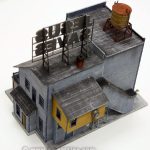 My Skid Row Mission incorporates all three previous mentioned themes of such a facility, filling food, lodging, and spiritual needs.  I started with the Bar Mills kit, The Gravely Building. I first made some structural changes by adding extensions to the building as if they were added on after the building was first completed. The add-on rooms needed to fit into or over the existing property lines. Most notable is an overhanging second floor room and a flight of enclosed stairs leading from the sidewalk to that room. The overhanging room would partly bridge over the alleyway. I also added a small room extension under that outcropping. The next major modification was to flatten one side of the gabled roof allowing for a small loft above the second floor.  I also added a large white cross on the side of the building, plus a large “Jesus Saves” sign on the flattened side of the old gabled roof.  I then added two welcome signs to the side and front of the building. Here is where you will see the name, “The Edith Keeler House.”  There are also people waiting in a soup line outside on the sidewalk.

This is just another way to give your model railroad project some personal creativity and a real life look. Most would not get the Dorothy Day- Edith Keeler connection, but there are always some who will. In this case the Trekkies surely will recognize the name Edith Keeler.  Doing a tongue in cheek building or vignette is a lot of fun; here are some other examples.  There are several of these “in-jokes”on Howard Zane’s layout. There is a little restaurant, the Retz Grill with several Hassidic Jews outside, Hassidim in 1940 West Virginia? There is also the hotel that welcomes livestock as well as people, and if you know Howard, naked women skinny dipping in the river. Some get it, others don’t. The most important thing is that you are having fun doing it!

But why a scene that is so depressing such as skid row? There is that idea about model railroading being a form of art. Skid row represents the other side of the tracks, the pool halls and bars, run-down tenement buildings and missions. Art does reflect real life and art sometimes takes on the darker side of the world. Many of us love to model those heavy industries and coal mines that are very dark and dirty, so don’t stop there. Remember, no one has ever modeled South Beach (that we know of)!

However, I think the best answer and example to this question of “why Skid Row?” is to look at what are considered two of the greatest model railroads ever built, George Sellios’s Franklin & South Manchester and Howard Zane’s Piermont Division.  George chose New England in the 1930’s as the time and place of his model railroad; that’s right in the middle of the Great Depression! Most of the Franklin & South Manchester has a strong run-down look to it, the look of the way thing were in New England in the 1930’s. There are scenes of people living in the street, shanty towns, and under-maintained buildings. In Howard Zane’s Piermont Division, it’s the Appalachian coal fields of West Virginia, Kentucky, and western Maryland, an area that is depressed to this day. Here you will find the company houses and stores of the coal companies, coal mines, and tipples. The key to the success of these two model railroads is the minute you look at them you know exactly when and where the artist was trying to capture.

In closing, I remember reading a newspaper article thirty-plus years ago. The writer was describing his first train trip. He went on to talk about all the beautiful scenery he was observing, then he lamented that he never took a train earlier in his life. “You can’t see this from 30,000 feet,” he wrote. But then he went on to say that riding a train did not just reveal America the Beautiful. He added, “You also got a chance to see America’s back yard, its junkyards, its slums, and the other side of the tracks.” He concluded that “that might have been the most important part of the trip.”