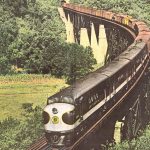 If you drive through central Kentucky and Tennessee on US 27 you will parallel one of my favorite railroad lines, Norfolk Southern’s CNO&TP. Formally part of the Southern Railway, the Cincinnati, New Orleans & Texas Pacific Railroad ran from Cincinnati to Chattanooga. It was part of what the Southern Railroad called its Queen and Crescent route, running from the Queen city, Cincinnati, to the Crescent city, New Orleans.  The line was divided into three divisions: Cincinnati to Danville, KY, Danville to Oakdale, and Oakdale to Chattanooga. It was the middle division that became known as the Rat Hole. That portion of the railroad between Danville and Oakdale would become legendary among Railfans. Here was a railroad with steep grades, 27 tunnels (hence the nickname “Rat Hole”), and numerous rivers with high trestles running through some of the most beautiful scenery in the East. 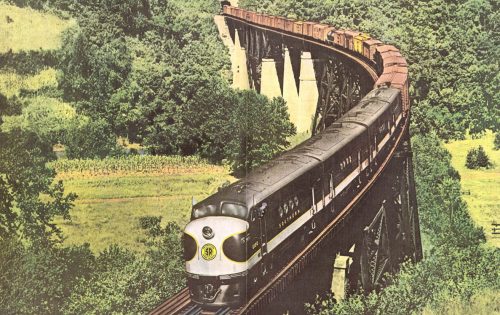 Southern Railway FT locomotives on the CNO&TP Bridge over the Cumberland River, print from Kentucky Railfan

Work on the CNO&TP was begun in 1869 by the city of Cincinnati, (which still owns the line now under lease to the Norfolk Southern by way of the Southern Railway until 2026). The railroad was constructed in order to counter the shifting of freight traffic on the Ohio River, a major part of the city’s transportation needs.  The completion of the railroad to Chattanooga opened a direct route to southern markets for the city. However, it did come at a cost; since the railroad was built as fast and as cheaply as possible, the new railroad would become an operational nightmare. As previously stated, 27 tunnels, sharp curves, and stiff grades, and limited fast scheduling, all contributed to the increased cost of running the railroad. Still, this was offset by the fact that most of the big northeastern railroads called on Cincinnati and the CNO&TP gave them a direct link to Atlanta and the big port cities of the Gulf Coast. Couple this to Cincinnati being a major manufacturing center in its own right, and the railroad boomed; from 1688 million ton-miles in 1925 to 4116 million ton-miles in 1967.

One other major market that ties into the CNO&TP is Saint Louis. The line to St. Louis branches off from the main line at Danville, KY and serves Louisville, KY before reaching the Mississippi River and St. Louis. From St. Louis the railroad goes as far west as Kansas City, giving the CNO&TP access to two major western gateways.

The boom in freight traffic caused the Southern Railway to begin a major rebuilding effort in 1961. This project would eliminate all but 4 of the 27 tunnels. This was accomplished by “daylighting” (removing the land above the tunnel), re-routing tracks, and the rebuilding of one tunnel. The cuts, created after the tunnels were daylighted have created some of the most spectacular scenery on the current CNO&TP. 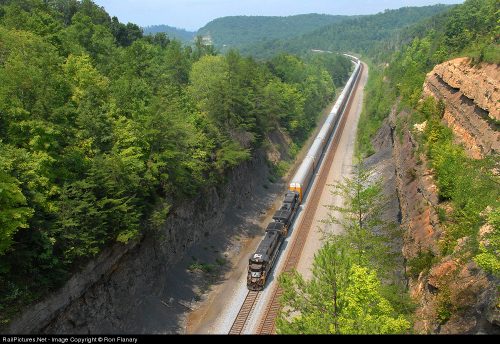 A former “Rat Hole” tunnel now daylighted outside of Keno, KY, this must have
been a massive earth moving effort, Photo Railpictures.net Ron Flanary

Other projects included straightening several curves and constructing new bridges. Some of the new bridges came about because of the damming of rivers; one such project was the replacing of a single track bridge over the Cumberland River at Burnside, KY. The original bridge (the first photo of this entry) was used numerous times in Southern Railway publicity photos. Most of the publicity went to Southern’s primary passenger train on the line, the Royal Palm, which ran from Cincinnati, OH to Jacksonville, FL during the winter season. This gave those who lived in the Midwest, Kentucky, and Tennessee a direct route to South Florida and the West Coast of Florida. 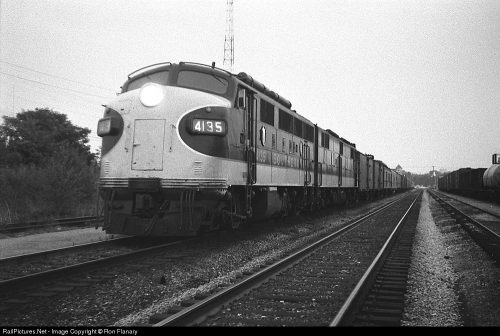 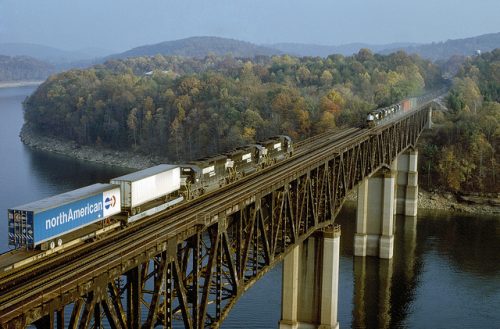 A spectacular view of the current version of the Cumberland River Bridge at Burnside,  KY.
You can see big changes from the photo above which was single-tracked, curved, and had a
tunnel at the north end.  Photo, Flicker Norfolk Southern.

One other innovation that helped the Southern smooth out the CNO&TP grades was the use of a revolutionary concept called Locotrol. This innovation allowed for mid-train helpers (locomotives placed midway in the train) to be radio controlled by the lead locomotive. This cut the cost of a second crew and allowed for the balancing of power and braking within the train. Southern pioneered this concept in test in 1963 and began full operation starting in 1965. This operation was identified not just by the mid-train locomotives but by the radio-control car. The term Southern RR crews used to describe this operation was “master-slave.” One train that was particularly interesting that ran on the Rat Hole route was a solid train of sulfuric acid tank cars; this train ran with the master and slave locomotives.

Today the CNO&TP is busier than ever. Norfolk Southern has taken steps to double-track parts of the line, undertaking projects including a massive rebuilding of the line between Somerset, KY to just north of Burnside, KY. This will include double-track, a new overpass bridge, and curve realignment. The reason for all these improvements over the years is that the CNO&TP sees an average of 50 trains a day.

Railfaning the CNO&TP is not hard. Most locations are easy to reach from paved roads. The hardest location is the twin tunnels and bridge at Nemo. Here you would need to drive or walk through the old Nemo Tunnel. I did this back in 1994 with my Toyota 4-runner after a failed attempt in 1991 in a Lincoln Town Car. The old tunnel is about a mile long and had some modest pot holes back in 1994; however, that was 19 years ago. I have no idea what shape the tunnel is in today. I doubt that anyone does maintenance on it, therefore if you try to drive in it take it very slow.  The CNO&TP has a lot to offer: beautiful scenery, spectacular bridges, and plenty of trains. Accommodations along the line are good with your standard lodging and eatery establishments. However, those who may like to kick back and down a few brews after a long day of chasing trains may be disappointed to find some counties in Kentucky and Tennessee are “dry!”   Another possibility for those who want to railfan in one direction but need to return home on a similar route is to consider railfanning the CSX Corbin Division. This line also runs from Cincinnati to Chattanooga. It is located about 25 miles to the east of the CNO&TP and follows I-75 for most of the line. The main difference between the two railroads is that coal dominates the CSX line, while general freight prevails on the CNO&TP, including NS Triple Crown Road Railers. Taking the time to visit the Rat Hole would be a very rewarding experience, and with NS running steam trips again you may even have the possibility of riding on the line one day.

Next time: Suggestions for Modeling the CNO&TP 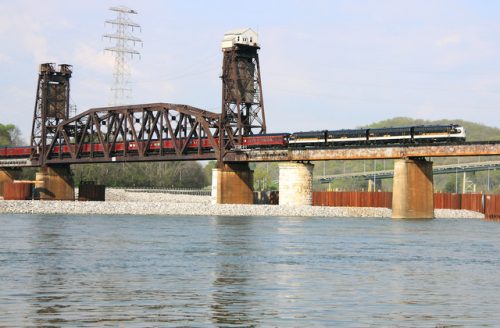 If you start Railfanning the CNO&TP at the south end in Chattanooga, you must film the Tennessee River lift bridge near the Chickamauga Dam. Photo by Yardlimit.com