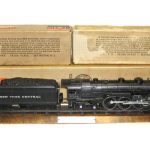 Let’s now take a look at the trains, locomotives, and rolling stock themselves, and see what level of fine art they have attained. The models are a little different, because in most cases they are mass produced, however, this facet of the hobby has always had its collectables and the collectors who in turn will pay top dollar for them. Be it an original Lionel 700e Hudson steam locomotive or a Kohs & Company C&O H-8 Allegheny, collecting model trains for an investment has always been very popular.

Tin-Plate, Die-Cast, and Brass, what’s the difference? Tin-Plate was the first material used to make toy trains. As for the tin-plate itself it is thin sheets of steel coated on each side with a layer of tin. It is then stamped into the desired form, folded and assembled into the desired shape. Tin-Plate was the primary form of construction up until the early 1930’s, when die cast took over as the desired metal technique to produce toy/model trains. Several manufactures today still use die cast boilers and tenders on state of the art locomotives. However, unlike the original models that had most of the detail cast in, many of the new models add such items as piping and appliances (pumps, tanks, and reverse gear) separately.

Brass is the material of choice since the 1940’s for highly detailed models. It’s a semi soft metal, therefore it’s easy to bend but hard enough to stand up to continual use. It was brass that brought HO 1/87 into the scale of choice for model railroaders in the 1960’s.  This would not have been possible without the opening of manufacturing facilities in Japan and later in South Korea. The ability of workers skilled in the art of working in miniatures in both countries was the big breakthrough. During this time the number of models produced increased dramatically. For the first time, it was not just the models of the most popular trains, but numerous models of some of the most obscure locomotives and rolling stock. Today, electronic innovations such as sound, digital command control, smoke, and lighting have advanced both die cast and brass models beyond their outward appearance.

“Scale collectors” unlike “toy train collectors” are more specialized, mostly concentrating on collecting models from specific railroads as well as specific eras. An example of this was my own collection. I had models of Pennsylvania Railroad locomotives and rolling stock, and those models needed to fit the era know as “transition.” Transition, is a reference to the time either right before, or right after WWII to the end of steam, late 1950’s. Unlike many PRR collectors I also collected locomotives of their electric fleet for that time period. Toy train collectors, are less specific, mainly because there are nowhere near the numbers of models available to specific railroads. For an example, the PRR K-4 4-6-2 Pacific would have only three or maybe four versions in die-cast. Their brass counterparts offer every variation that the real locomotive ever had, no fewer than 14. Over the years I have seen some of these models quadruple in price. What drives the toy train market most is the number that were produced. The fewer the number, the more they appreciate.

Unfortunately, many non-collectors who had a train set as a child or have their father’s train set are under the false impression that their trains are worth a fortune. Just the other day a woman was telling me how she gave her dad’s American Flyer train set worth “thousands of dollars” away. So many times I have tried to explain to people that there were thousands of the very same train set you had made per month, therefore, what you had is not worth thousands. If you are going to be a collector you first need to study up on what is rare and what is common. 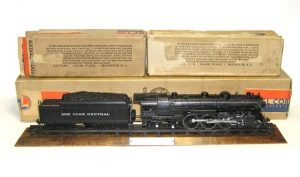 Here is an example of an original 700e Lionel Hudson (above) from 1937. The 700e with the 700w tender, was the first truly scale model train locomotive produced in limited quantities in the US. They now sell for upwards of $9,000 to $10,000 dollars, and are sought after by model railroaders, toy train collectors, and collectors in general.

Other toy trains also bring high dollars when it comes to collectors. Original standard gauge or tin-plate models are often sold at similar prices to the 700e. One example is the Lionel Blue Comet set, currently selling for $6,000 at the Dakota Gallery. 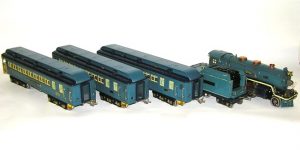 Over the years there have been some notable builders of museum quality brass model trains. These include but are not limited to The Car & Locomotive Shops, Fine Scale, W&R, Key, Challenger, and Kohs & Company. There also have been some individual builders who build model trains one at a time by hand, including painting and lettering them; usually these models are built on the request of a client. One of these builders was William (Bill) J. Lenoir. He built nearly 300 locomotives, and they sold anywhere from $2,000 to $5,000, I could not find any for sale at the time of this writing so I will not comment on their current value.  In fact it was a Lenoir hand-built New York Central Hudson that graced the very first cover of Model Railroader magazine in 1934. 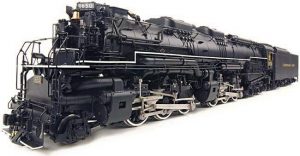 State of the art museum quality brass models are the only way to describe Kohs and Company models. Here we see their C&O H-8n Allegheny, it originally sold for $4,650 in April of 2010, it is now valued at $7,500, an increase of 60% in two years.  Below is a chart of other Kohs models and how they have appreciated.

Now let’s return to the value of the layout itself as art. Here is where the price can reach into unknown numbers. Even in the toy train sector, what price would Frank Sinatra’s train layout bring? It’s a safe bet that it would sell between high six figures and low seven figures. However those numbers would be greatly increased for the likes of Howard Zane, George Sellios, or Rod Steward’s model railroads.  Many of these artists have made plans to preserve their work for when they pass away, even John Allen expressed a desire to have his layout continue after he died, and unfortunately the fire destroyed any hope of that happening.  Only time will tell on the future of these works of art; maybe if we could come back in 200 years we could visit them in some of the best art museums of the future.