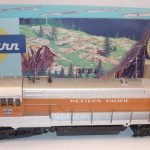 The U Boat: Models and Anecdotes

Over the years, numerous models of U Boats have been produced in all scales. Athearn was probably the first to mass-produce a GE locomotive in plastic; they did an HO version of the U-28b and U-28c. However, these models had one major flaw: the width of the hood was too wide. This was done in order to accommodate the size of the Athearn motor at that time.  Athearn also did a U-30b, U-30c, U-33b, and a U-33c, all with the same extra-wide hood.  At the same time that Athearn produced its U28’s, AHM imported an U25c model from Rivarossi. This model ran poorly and sat too high on the frame.  The U-28b is now available from Walthers in their highly detailed and accurate Proto 2000 line along with the U30b. Atlas has released its own version of the U-23b U-30b and U-30c in phase I &II configurations, all highly detailed and available with DCC and sound if desired. 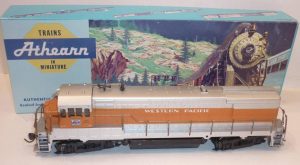 A HO U25b was brought out as a white metal kit back in the 1970’s. In the 1990’s Stewart did a nice plastic kit, and today that model has been updated to RTR (ready to run) with DCC and Sound as part of Bowser’s Stewart division.   As for that Rivarossi U25c, Hornby America has announced a retooling of the Rivarossi version, complete with new motor, separate detail add-ons, as well as DCC and Sound.

The AHM/Rivarossi version of the U-25c. Only four of the six wheels per truck were powered. photo from photobucket.com.

Those huge U50b and U50c units have been produced in plastic as well as brass. Athearn has released a very nice version of the U-50b in both Southern Pacific and Union Pacific livery. ConCor has created this model in N scale. Overland has built the models in brass, and LMB introduced a crude version of the U50b back in the 1960’s. If you want to run one of these, remember that this is a very large diesel locomotive and needs a wider radius then most diesel locomotives.

As for the specialized passenger locomotives, there was an N scale model of the U-30cg by Minitrix. Hallmark and Overland have both released the U-30cg in HO scale brass. There has not been an O gauge or O scale model built of the U30cg. MTH has come out with the U-25b and a U-30c, and Atlas has done their U23b in O scale; all are available in two-rail and three-rail.

The U boats were very common from the 1960’s to the 1990’s; they could be found in every region of the US. There were even some railroads that would never purchase a model from EMD new. They preferred ALCO and GE, the Delaware & Hudson being one such railroad. U boats could be found wearing everything from PC black to UP Armor Yellow to Santa Fe’s Warbonnet red and silver, and they would show up as secondhand units on many of the short lines of the recent past. You may even find a few running today. Other unique variations included high short hoods or those specially built road slugs used in Boon Valley. Overland Models did make brass Mate units.

Today, modelers have the extra feature of realistic sound. The U boats had a very unique sounding prime-mover. It would make a constant chugging sound, similar to that of an ALCO. To this day, all of GE’s latest entries into the locomotive market still produce the same audio characteristic!

As for anecdotes, a fellow worker at the train department in Orange Blossom Hobbies, Chris Velez, always joked about U-boats in the Altoona Reservoir.  For those who don’t know, the Altoona Reservoir lies inside the center of Horseshoe Curve, and the U-boats he referred to were either PRR, PC, or Conrail locomotives that might have derailed and slid down into the Reservoir. 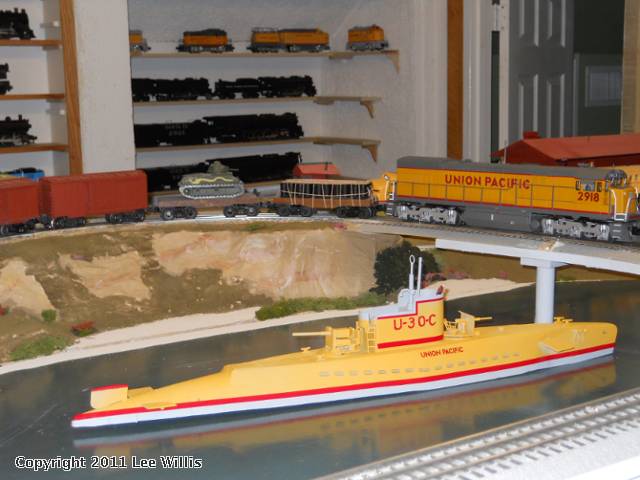 Not the Altoona Reservoir, but an interesting take on two UP U boats,
or should I say a UP U-30c and Das U Boot! Photo by Lee Willis.

Today, GE has become the dominant builder of modern high horsepower locomotives. What started with those three high-hood U25b demonstrators has evolved into 4400hp high-tech locomotives that have brought US Railroads full speed into the 21 century.