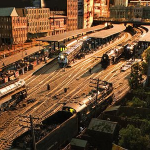 In the world of model railroading there have been some great model railroaders over the years. Names like John Allen, George Sellios, Howard Zane, and Malcolm Furlow, are just a few.

Today, one of the world’s best known celebrity entertainers, Rod Stewart, may very well be one who can join this group of masters. Rod has quite an impressive model railroad on which he did the majority of the work. Images and stories of his layout have already been published in Model Railroader magazine twice. So let us see where Rod and his model railroad fit in with these legends of the hobby.

Much is known and has already been written about Rod and his career, but we are interested in his talents as a master in the art of model railroading, so here we will focus our look at Rod Stewart the model railroader. 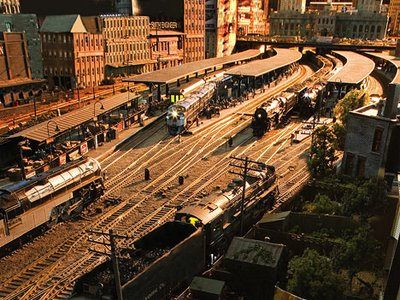 So what does make someone a master in this hobby? My definition would be the ability of a person to transform a scale model or a model vignette into reality. Most of the masters have been able to do this, primarily by paying close attention to reality and including in their work, the myriad of details that make up the real world. Though rarely, some masters manage to achieve fabulous realism even while presenting a whimsical side of modeling. One of the best known modelers who always included humor and whimsy in his work was John Allen and his famous layout, the Gorre and Daphetid. John is considered the father of the super detailed layout. No layout up to that time went to such lengths in detail. However, the Gorre and Daphetid did not only give the impression of a real world. Much of John’s themes were devoted to a whimsical interpretation of realism. But does this style mean that John Allen and folks like him can be considered highly talented artists, but count against him from being considered a master modeler based strictly on maintaining true realism, or are there two categories for master model railroaders?  One that is totally real or prototype based, or one that takes on an artistic license that allows for the more whimsical approach. Surely, John Allen will always be considered a master and an innovator in the hobby.

The second example is those who model a specific location on a prototype railroad. Let’s look at a great example of this approach to model railroading. Calvin Winters’ Key West extension of the Florida East Coast Railroad was built by, Gail and Ross Allen. Calvin’s layout captures a specific date in time (January of 1930) on the FEC line from downtown Miami to Key West. All rolling stock, right of way, bridges, structures, and even the railroad car ferry that sailed from Key West to Havana, are totally accurate reproductions.  Cal takes this approach one step further in his operating sessions. Here 10 -12 operators are given the timetable for that day’s operation. Their responsibility is to execute the operation of the railroad as prototypically as possible for that day. I was personally invited to participate, and it was very intense, but a lot of fun. 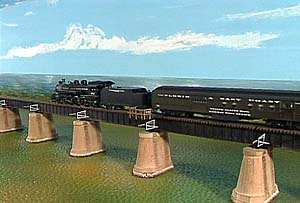 Here we see a passenger train on the seven mile bridge.
The only thing missing is the scent of salt air and the steam.
(photo found on blog at jbritton.pennsyrr.com)

Then there is a third side. Two of the best examples of these are George Sellios’s Franklin and South Manchester, and Howard Zane’s, Piermont Division. These are two highly detailed realistic layouts, but both modelers take artist license when it comes to the reality side. Both layouts give the impression of, the real world of New England and Western Maryland respectively, but do not reflect a specific location or railroad. However, their realism is beyond convincing. Walking into Howard’s basement your first impression is Appalachia, highlighted with a personal touch. This is the avenue most model railroaders take – it gives them the leeway to be prototypical but allows them the freedom to build with originality.

In my estimation, Rod Stewart’s modeling expertise emulates this third category. Rod’s Three Rivers & Grand Street is a freelance version of the Pennsylvania and New York Central Railroads, set in the state of Pennsylvania of the mid 1940’s. Rod’s long interest in train’s dates back to his childhood. Growing up, his parents operated a shop not far from a British Rail line.  His first try at building a model railroad was a British one but it failed to get off the ground. In 1993, Rod was ready to try again, and this time it would not fail. He teamed with an old friend from his road crew, Malcolm Cullimore, who coincidently was also a model railroader, something Rod did not know until this time. Malcolm and Rod quickly set about planning a large layout for his new Beverly Hills home, one that would take up a space of 23’X124’.

Rod Stewart greatly admired the works of Earl Smallshaw and George Sellios. Their highly detailed models inspired Rod to build on their level. His love of the large cites of New York and Chicago was the background for his desire to construct a large metropolitan city with lots of tall buildings. He was always fascinated with these two cities’ tall skyscrapers and they are the most dominating and impressive feature of his layout. But it’s not just the tall buildings that give this layout a very convincing urban feeling – it’s everything that the city side of the layout presents. Of particular note is the Grand Street Ice House, definitely one of my favorites. I have always liked urban ice houses; Rod’s ice house has all the right lines with all the right detail.

Rod Stewart’s Three Rivers City is as good as I have seen. On a scale of 1-10 he is at the 9+ or 10 level. His ability to kit-bash numerous model kits into these tall skyscrapers, is impressive, but also frustrating for many of us. Why? At the same time Rod was buying up Bachmann city scene buildings to kit-bash into his many wonderful signature building, so were we! But Bachmann had discontinued the kits at the time, and one of the few places to find them was eBay. We were outbid almost every time on eBay, and rumor has it that it was Rod who out bid us! If so, the results of his work were well worth it in the photos all of us can enjoy.

I understand that on the other side of the layout a steel mill is planned. It will be very interesting to see what level Rod can take heavy industry to. Rod has shown that he is right up there with the best when it comes to urban scenes; now we will see how he compares with the likes of the late great Dean Freytag. My bet is he will do very well, for what is Chicago without Calumet City and Gary Indiana, or New York without those New Jersey oil refineries?