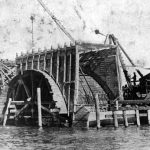 KEY WEST AND THE OVERSEAS RAILROAD – PART I: THE RAILROAD THAT DIED AT SEA

2012 will mark 100 years since the completion of the Key West extension of the Florida East Coast Railway, “the Overseas Railroad.” Yes, up until 1935 you could take a train all the way to Key West, Florida. There are many long abandoned but famous rail lines in the sunshine state.  Atlantic Coast Lines’ branch to Everglades City, the Seaboard’s speedway between Auburndale and Coleman, as well as the Seaboard branch to Rosewood and Cedar Key. But none can match the legendary Key West Extension.

Begun in 1905, the Key West Extension took seven years to build, at a cost of 50 million dollars. During construction it survived three hurricanes costing scores of workers their lives. Finally, on January 22, 1912, the rails reached Key West. When Henry Flagler, whose dream and money had built the railroad, rode into the city of Key West on his private car, he could not see what his endeavor had built, for he was nearly blind. Over the next 23 years the railroad would be considered the 8th Wonder of the World. 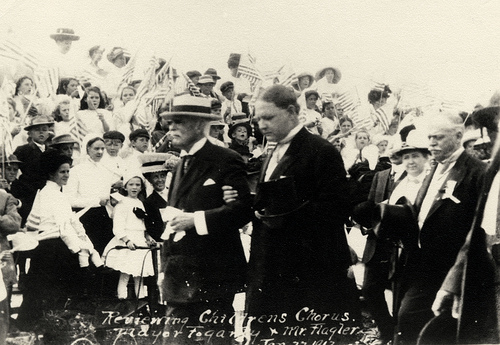 “I can hear the children, but I cannot see them”

Key West, at the time of the railroad’s construction stood at a population of 30,000, so a lot of money spent to build a railroad to a community that small. However, the decision to build the railroad was made in 1905, the same year the United States began work on the Panama Canal.  This would mean Key West would become the closest deep water port to the new canal. Also, Key West was 90 miles from Havana, Cuba and its markets and goods. Flagler believed having a railroad to Key West would become very profitable in the long run.

Construction of the railroad was very high in both dollars (50 million) but, more importantly, in lives; scores died building it. There were numerous obstacles to overcome in the project, fresh water being the most important. There was no fresh water on any of the islands that made up the Florida Keys; this meant all water had to come from the mainland. Flatcars fitted with open cedar tanks would be filled near Florida City then brought south. It took 700 of these cars hauling 4 ½ million gallons of fresh water each month for the railroad alone. 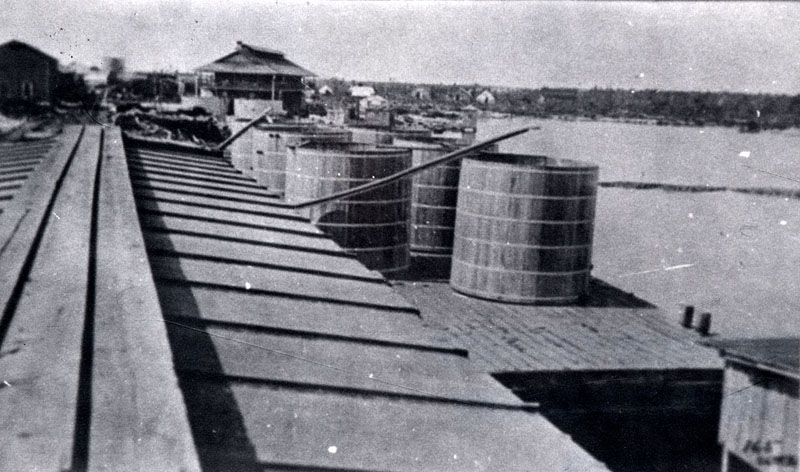 Water was just the beginning. All materials including food stuffs had to be transported from elsewhere. Special cement used in saltwater came the furthest, from Germany. Lumber was hauled down from Southern Georgia and Northern Florida, and steel from Pittsburgh. Most came by way of ship; the rest would be hauled by trains as the rails proceeded south. No matter how supplies arrived, transportation took up a large part of the cost.

This railroad was unique in several ways, however, its need to traverse large areas of open sea was the most interesting. At one point a seven mile bridge needed to be constructed with a swing bridge nearly in the middle, just south of Pigeon Key at Moser Channel. The railroad’s three longest bridges featured three different types of bridge construction. The Seven Mile Bridge was a deck girder on concrete piers. The Long Key Viaduct was an arch concrete viaduct structure, and the Bahia Honda Bridge featured thirteen through-truss spans.  Another interesting feature of these bridges was that anemometers were placed out on the bridges in open water and tied into the block signals. Whenever wind speed exceeded 35 MPH (a near gale force wind), they would cause the block signal for the approach to that bridge to go red.  There was little question that safety was a major priority on running this railroad. 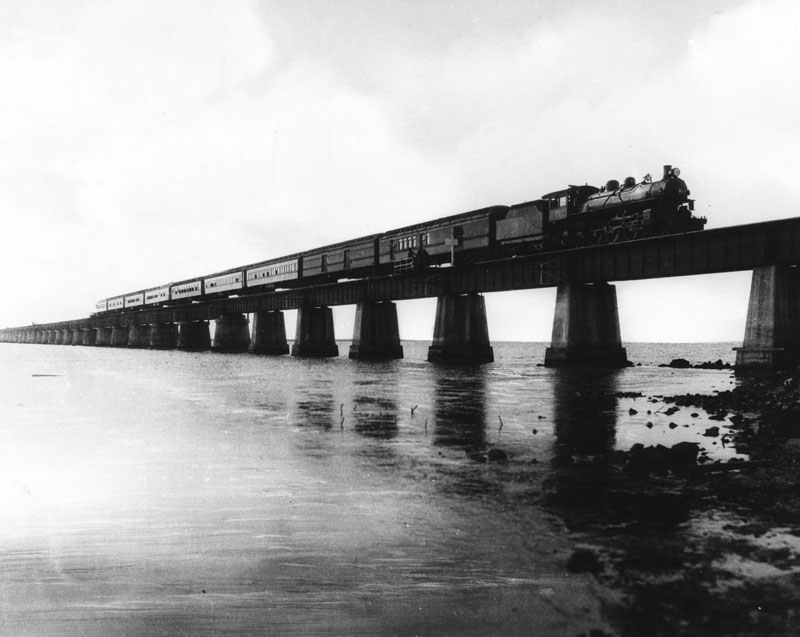 The facilities at Key West were the largest and obviously the most important south of Miami, sitting on 140 acres of land, most of which was reclaimed from the sea. It featured a 2000 ft pier and a railcar ferry slip, directly connecting the railroad to Cuba. This allowed the railroad to load and interchange freight cars with Havana and all of Cuba. Also at this facility, at the 2000 ft pier, passenger trains could unload their passengers directly to ships heading for Cuba. One of the most interesting, if not darker stories of the Key West station and Dock took place during prohibition.  At that time the amount of caskets being off loaded by the ships returning from Cuba and heading for points in the Northeast by train greatly increased.  The question going around the docks was, why are so many people dying in Cuba? The answer came when one of the caskets fell off its baggage cart and broke open. There, smashing to the ground was not a corpse but bottles of rum! The mob was using the caskets to run their illegal booze.

During the 22 years that the railroad ran to Key West, the train that became the most synonymous with the run was the Havana Special.Originating at Penn station in New York City, the train traversed four different railroads (PRR, RF&P, ACL and FEC) before it reached Key West, 37 ¾ hours later. However, it was the fastest way Americans could leave the “dry” United States and head for wet and wild Cuba. Needless to say, the train quickly became the pride of the FEC fleet. There was also a local passenger train that made the trip each way every day. This train would handle most of the mail and express business for the intermittent station stops along the way.

Two very important freight operations were a tank/water train, and the “Yellow Apparel,” the hot perishable train from Cuba. The tank/water train would load water at wells between Homestead and Florida City and then head south, delivering a vital supply of water to towns along the extension. Also this train would serve the many railroad water towers along the route; remember, steam locomotives used up plenty of water in their boilers. The hottest freight train on the line could be easily distinguished by the number of yellow refrigerated cars in it’s consist. Produce originating in Cuba would be loaded onto these yellow reefers and then in turn would be switched onto the car ferries.  Once in Key West the cars would be switched off the ferry and then made into a train and rushed north. Since most of the refrigerated cars of the time were painted yellow the name “Yellow Apparel” was adopted.  There was also a local freight that covered the route when needed.

By the time the great depression hit the United States, the Key West Extension and the entire Florida East Coast Railway was in severe finical trouble. It soon was in receivership, and running the railroad to Key West was becoming more and more expensive. With the end of prohibition, even the very popular Havana Special was running with lower numbers. The question became, how much longer could the railroad afford the financial drain of the Key West Extension. Henry Flagler’s dream that Key West would see a boom in cargo traffic with the opening of the Panama Canal never materialized. For the trustees the writing was on the wall.

September 2, 1935 undid in four hours what seven years took to build. A category 5 hurricane struck the Keys killing hundreds, destroying communities, and washing out most of the railroad’s right-of-way. However, every single bridge along the route survived, giving testimony to the original engineering design of the project.   The storm of 1935 is legendary; it has been talked about in books and movies, including the movie “Key Largo” starring Humphrey Bogart, Lauren Bacall, Edward G. Robinson, and Lionel Barrymore.  Lionel Barrymore tells the story of the hurricane and how a wave swept over Matecumbe Key, wiping out over 200 people on the rescue train. The Key West Extension was given a mortal blow. A train that was in Key West at the time the storm hit tried to leave the next day only to reach the end of the seven mile bridge before it was forced to turn back to Key West. No train would ever run from Miami to Key West again. After inspecting the line and determining that the cost of repairing the line would be prohibitive, the railroads sold the right-of-way to the State Of Florida. They in turn rebuilt it as the overseas highway. 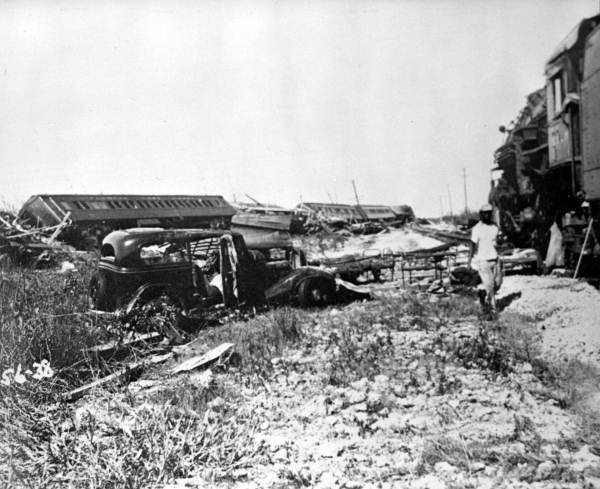 The Rescue train after the storm,  Monroe Public Library

The Key West Extension became known as The Railroad that Died At Sea. However, the legacy of the railroad lives on in the overseas highway, even though new bridges have replaced the old railroad bridges. One can still see these old railroad bridges off to the west as you drive down the new US 1 bridges to Key West. Some people even say that if you listen very closely over the sound of the waves and wind, you can hear the ghost of the Havana Special whistle as she blows for the Moser Channel swing bridge. 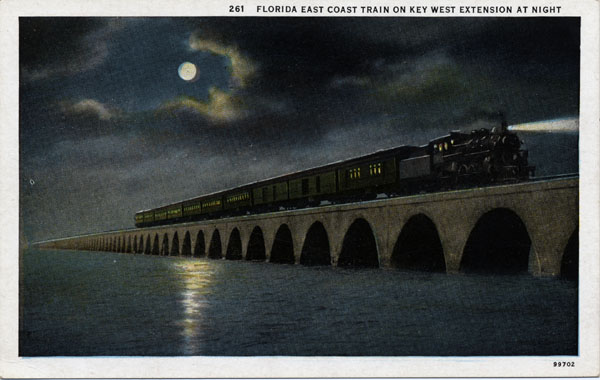 Next time, What If the Overseas Railroad had survived?