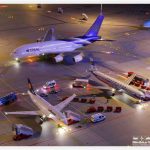 MINIATUR WUNDERLAND – WHAT’S IN A NAME?

Wow. If you haven’t seen it yet, let me just put the words straight into your mouth. Wow. What am I talking about? The new 2012 official promo video for Hamburg, Germany’s Miniatur Wunderland, the world’s biggest and most detailed public model train display. With apologies to contenders on this side of the pond, there’s nothing like it, even here in the USA where bigger is always better.

According to the video, which is voiced in English, over 500,000 man-hours went into creating this show-stopper and every minute of it shines through. From the stunning recreations of European cities, to the wonders of America including southwestern deserts and a recreation of Las Vegas with so many lights it must make every house for miles around dim when they all come on, Wunderland lives up to its name. No wonder a million pairs of eyes every year make the trek (for train buffs, dare we say pilgrimage) to see it all. Little surprise that the operations room that makes everything go bears more than a passing resemblance to mission control at NASA. It takes a lot of computer power to oversee the operations of 900 trains and 250 moving vehicles. 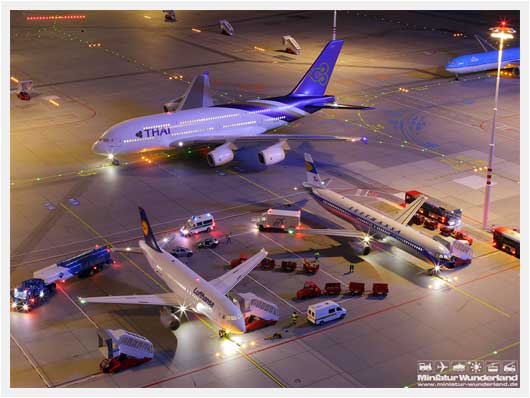 The roads themselves are a wonder, in some ways even more impressive than the trains. Wunderland took the basic Faller Car System designed by the German manufacturer to let a few HO vehicles run autonomously down a prepared road with an invisible embedded guide wire, and made a whole living layout out of it. In the imaginary town of Knuffingen and the other environs, hundreds of cars, buses, and trucks navigate the roads themselves, without any electric wiring. This is accomplished by internal rechargeable batteries that are renewed daily when the cars are sent to their hidden charging stations by the master computer system. Sub surface switches allow the cars to vary their routes and electromagnets can even stop and start traffic at intersections. But these cars don’t just go around in circles. Fire trucks race to smoking buildings as Police cars pull over violators. Many cars have operating headlights and the emergency vehicles have flashers as well.

The newest feature is an operating airport that puts many real-world facilities to shame, with its extensive runways, jetways, and terminal buildings. And yes, the planes move too, some even accelerating then rising off the runway to disappear into a cloud covered panel, later to reappear as they land and taxi off. Over 40 different aircraft call this airport home, including a few rather unorthodox fliers (as you’ll see in the video). All of it has lighting (just a few of the 300,000 LED’s that make Wunderland shine) and some sound. It took 6 years of planning and building to put Knuffingen Airport on the map. The airport has a new version of the car system with sensors, and anyone who’s been to an airport knows that there are dozens of types of moving vehicles that are unique to that environment. 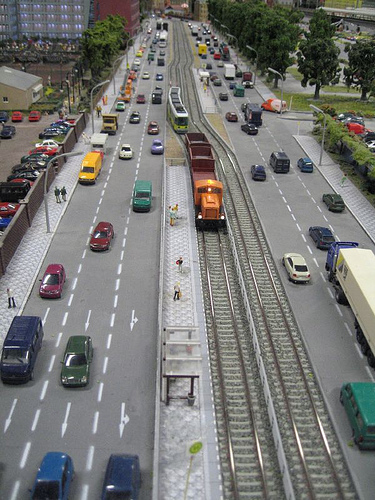 Wunderland’s America section alone covers a number of different parts of the US. In addition to the aforementioned City of Lights and Neon— Las Vegas, there’s the Grand Canyon, Mount Rushmore, a Christmas town, and, if you dare, America’s top secret research facility at Groom Lake, Area 51!

Watch the video and you may catch glimpses of any of the hundreds of in-jokes and humorous asides built into Wunderland. From the shark cage, to the visiting UFOs (and, I think, the Stargate), to an active crime scene in miniature (C.S.I. Hamburg?), there is so much to see that you may need to go several times. Over 200 push-button controlled interactive animations give you more to do than just gape and take pictures, you can be in control. And as every model railroader knows, the work is never complete. This attraction has another decade of expansion planned to the exhibits. If they were able to cram all this into 5 minutes of video, image how much of the 6,400 square meters (that’s over 68,000 sq ft to us here in the USA) of layout are yet to be seen. Don’t take my word for it. Take the 5 minutes and watch for yourself, just don’t be surprised if the travel agent is too busy booking other tours when you call. 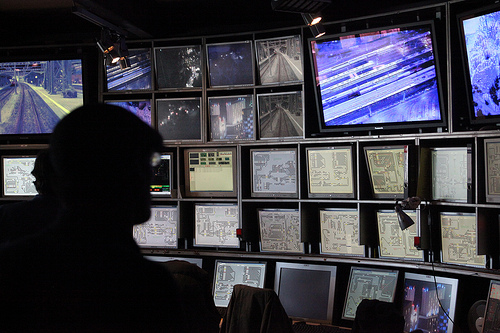 Miniatur Wunderland has even been an inspiration for many of our clients. So, if you can’t get there yourself, do what some of our clients here at SMARTT have asked us to do. That is to create a slice of this marvel for the layouts we are building for them. Most notable of these have been requests we have had to build an elaborate full, featured Faller car system and custom built interactive animations, complete with lighting and sound effects.

Well, there you have it. Miniatur Wunderland. Truly an inspiration for us all.