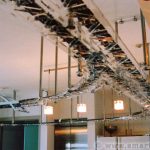 Mojitos, twenty dollar martinis, swank hotels, restaurants and clubs, as well as all those very beautiful people, this is what defines South Beach. So what kind of model train layout do you build for someone who lives on South Beach? The answer is one of the most unique and innovative layouts we have ever built.

I took a stroll down Ocean Drive, to an outdoor table at Mango’s Tropical Café. Inside the music was hot and the dancers were even hotter. I ordered their famous Mambo Chicken Wings and a Mojito, I then sat back to take in the sights and sounds of the beach. I was totally lost until I remembered why I came down here – to meet the man whose model train layout was built to fit the design of his South Beach apartment. I was soon off to discover something totally new in model train design. 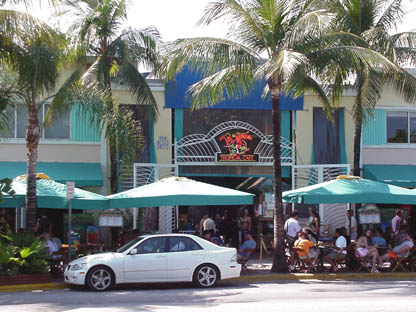 Our client, Jeff has a luxury twelfth storey condominium that overlooks Government Cut. From his digs he enjoys a breathtaking view of all the huge cruise ships that call the Port of Miami home. Just across the channel is Fisher Island, one of the most expensive places to live in the US – anywhere you focus your eyes there is a fabulous view.

However, we are here for the trains and they are just as impressive as the images outside the windows. I have never seen a model train layout and operation that fit so well into the décor of a living space.

This is no G scale toy train that is your typical shelf layout running around the walls of your favorite eatery or watering hole. This really is the ultimate toy for a big boy!

The whole setup is in Hi Rail O gauge.

The trains here travel from the kitchen to the den on a stylish, clear acrylic lattice bridgework. It is suspended from the ceiling by polished stainless steel struts with chrome fittings, attached to acrylic cross members on the ceiling. Track lighting illuminates the layout and mirrors are used in various places. There is a beautiful acrylic arch bridge as well as a specially designed train elevator that allows for the movement of trains from display shelves to the operating layout. Truly a mix of art deco and sleek modernism. 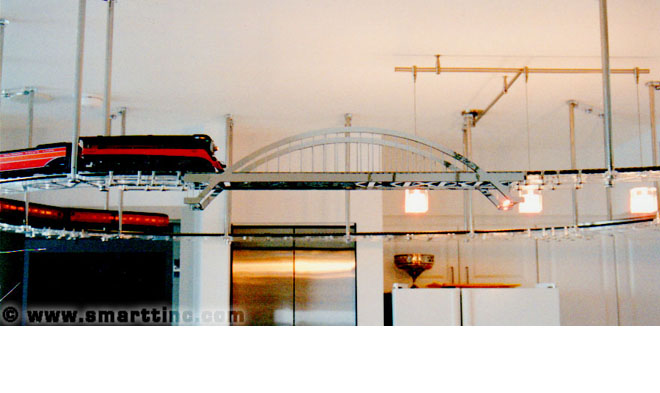 The track plan of this layout is a variation of the folded dog bone design. There are two main lines: one that traverses from the kitchen to the den, the second encircles the den. There are several main line switches (6), including a reverse loop, a passing siding, and two sets of crossovers to connect the two mains, there is also a small three track storage yard. One switch is a lead to the elevator; however there are very few accessories. The trains are controlled by MTH’s Digital Command System which allows for multi-train operation on the same mainline.

The story of how all this began is proof again of the magic of this wonderful hobby of model trains. A chance encounter that became love at first sight.

Looking for a place that sold plumbing supplies is how Jeff’s adventure with model railroading began. He was out one day looking for some fixtures when he happened into a model train store by accident. Though he had no pre-desire to get into the hobby, he was so fascinated by what he saw, that he was hooked in no time. In the store, he bought his first loco, along with some books on model trains and the art of model railroading. His initial curiosity led him to purchase more model trains that in turn led him to search for how he could have a layout built in his condo.

Soon Jeff was engrossed in trying to create a layout that would not only fit, but complement the entire design of his condo. Enter SMARTT. This was a project that fit perfectly into SMARTT’s CEO Michael Hart’s expertise as a model railroad builder with an architectural and engineering background. Soon Michael and Jeff were sitting down and discussing plans to build an ultra-high tech suspended layout for his condo. Mike soon came up with a unique track plan and a one-of-a-kind design plan for the layout suspension system that fit into right in with Jeff’s condo décor. Needless to say Jeff was very well pleased with the design and the project was built. 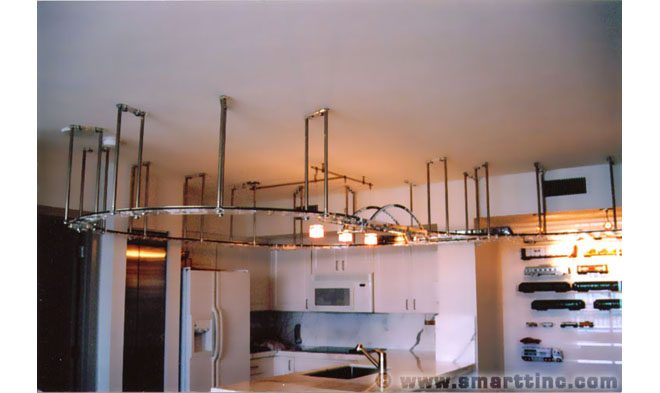 Jeff was not looking to take on a new hobby that day he walk into the train shop by mistake and he does not consider himself a model railroad purist. He acquires models based on what he likes and not by any particular prototype — he runs his train to have fun. He is a stickler for perfection in the models he does collect, and this uncompromising point of view was paramount in his choice to hire SMARTT. The layout has become a part of his home and life, and he and Michael have become friends as well. Just one more part of the magic that model railroading can provide. Jeff still comes by the shop to see what projects we are working on. Whether we are working on a free-lance layout or one with prototype fidelity, he loves them all. 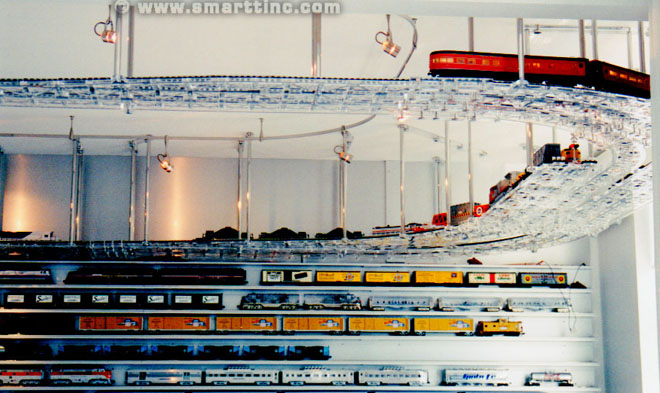 Jeff’s project was one of the most unique ones we have ever taken on. The end result showed that with creative imagination there is a way to develop a project into the special needs of our client’s living space. It also showed how anyone could become part of this hobby without having to be an avid model train buff. There is plenty of room in this hobby for everyone from the novice to the rivet counter, and no matter where you fit in, we can build a project to fit your needs. (learn more about Jeff’s layout here)