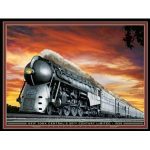 The last decade of the twentieth century saw a revolution in the detail and quality of HO plastic diesel locomotives. Prior to 1989 if you wanted a model of a plastic diesel locomotive you were limited to a few not very detailed models encompassing a very short list of road names. Things began to change in 1989 when Life-Like Models introduced their new line of locomotives called Proto 2000, brass quality detail in plastic. They started a new trend of offering their models in numerous, prototypically correct paint schemes.  They also dared to produce replicas of many different makes and models of passenger locomotives, including E-6, 7, 8, Alco PA-1 & PB-1, DL-109, and the FM that Erie Built. This now opened the door to model the golden age of the Streamliner and luxury passenger trains both pre and post WWII.

In the late 1930’s streamlining had become the next big thing. Industrial designers like Raymond Loewy and Henry Dreyfuss were hired to modernize and streamline existing trains like the Broadway Limited and the Twenty Century Limited. Older equipment was rebuilt, most with air conditioning, and semi-streamlined. New fleets of silver streamlined trains ran in the West and the South, pulled by their new sleek brightly colored diesels.   But then came WWII and all plans to further modernize came to a stop as all industrial efforts were put into war production. 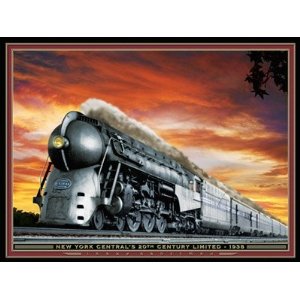 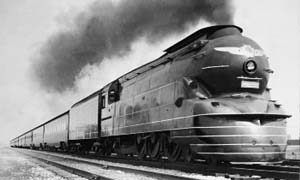 Broadway Limited circa 1937 photo from http://www.paper-dragon.com

By May of 1945, the War Production Board began to remove restrictions on ordering new passenger cars. By the time the war ended in August of that year the race was on to order and build new passenger trains, and most of the major railroads placed major orders, ordering cars and locomotives by the hundreds. It was during this time that the most colorful and most luxurious passenger trains were built and operated.

As with the plastic locomotive boom, the 1990’s also saw a boom in brass passenger trains and cars. These highly detailed models of specific passenger cars and trains were detailed right down to the underbody appliances. However, there were two very large drawbacks to these models.  First, they were very expensive, an average of $400.00 to $475.00 per car, way outside of most modelers’ budgets. Secondly, they were so heavy that no brass locomotive would pull them, and only two or three of the plastic models could.  This put them into the “collectors only” category, with most either staying in their boxes or being displayed in a glass case, never being run on a layout.

Recently we had a client who wanted a PRR passenger train. Their first choice would have been the 1938 or 1948 Broadway.  Both are very hard to find in brass, (they never been made in plastic) and he wanted to run them. So even if we found them, it would have been difficult to operate them on a layout.

As the 1990’s brought in a new era of plastic locomotives, the new millennium began the new era of plastic passenger cars and trains. Several manufactures began to carry the same detail quality found in the earlier diesel locomotive models on their new passenger car models. Then they started to supply complete passenger trains at an affordable price, starting at $50.00 to $65.00 per car. Furthermore, the manufacturers’ decision to issue one car per month made it a lot easier for most modelers to afford these items. These cars were just as nicely detailed and painted as their brass counterparts of the past. Best of all, they could be pulled by most of the plastic passenger locomotives, and they could run on most model railroads.

In stores today we have the choice of a Super Chief, a California Zephyr, the Hiawatha, the Empire Builder, Coast and Morning Daylights and now the Twenty Century Limited, plus the Pioneer Zephyr and an M-10000. However, except for the Century, all the other trains are of the west or northwest. We still do not have those beautiful streamliners of the south or Midwest, and we still do not have the flagship of the most modeled railroad in the world, the Pennsylvania’s Broadway Limited.  Every year I hope to see that announcement that someone will finally come out with the 1948 Broadway Limited.  Producing the Broadway would open the door to model other PRR passenger trains since many of the cars used on the Broadway were used on other trains: the twin unit diner sets, 21-roomette , duplex sleepers , 10-6 & 10-5 sleepers. Together with the B60-b baggage cars, the R-50 express reefers, and the P-85 coaches that are already on the market, a Pennsy fan would be in Heaven.

Still, there are so many great trains that have not been produced: Illinois Central’s City Of New Orleans, the Panama Limited, and the City of Miami. The trains of the South: The Southern Crescent, the East and West Coast Champion, The Florida Special, the Silver Meteor and Star.

I know it will take years before we see many of these trains, but at least we have a beginning, for we finally have a chance to recreate those glory years of the passenger trains and run them on our layout. We can bring back those golden age days of railroading in miniature, remembering what it was like before the 707 and Amtrak.