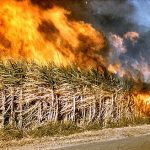 Modeling the Florida sugar operations would be challenging and take a high skill level in model building. Commercially there are no off the shelf kits that follow any of the structures, locomotives, and rolling stock that match the Florida sugar operation. However, there are plenty of items available that can be made into close reproductions of most of the models needed. The rest would need to be built from scratch. Let’s take a look at what can be kitbashed and what needs to be scratchbuilt.

The benchwork would be very easy; it would be all flat as there are no hills in central Florida. The only difference would be to cut into the flat surface (plywood, Homosote, etc…) the canals and drainage ditches.  These would be mostly straight and no more then 8 scale feet from the top of the table. The canals would be from 20 to 50 scale feet wide and the ditches 10 to 15 scale feet wide. The drainage ditches are similar to most agricultural irrigation ditches. The railroad roadbed should be less then half the normal height; this would be on the connecting branches to the class I railroads. The lines into the cane fields would have the right-of-way at the same level as the ground. In HO scale, code 70 track would look the best, but you could get by with code 83. Dirt roads follow most of the trackage in the fields. There are also some paved roads in the field, about a 12:1 ratio.

The hardest part of the scenery would be the sugar cane itself; there is nothing available commercially. There are two ways you can go with scenery material that is available: Either modify one of the available corn field kits, or make your own cane out of Woodland Scenics field grass. It would take work and time for both endeavors. I believe the field grass would be the way I would go. It comes in the right colors and all you need to do is attach the right amount together and dip the bottom in a brown-green paint. Remember, you must make a lot of these and they are very repetitive, so be prepared for a week’s worth of work.

An example of sugar cane in Florida.  Photo by U.S. Sugar


Dante’s Inferno: when the cane is ready to be cut, it is set afire. This is done to burn off all the under brush and to chase all the vermin away. The scene looks like something out of hell! I do not know how you would depict this on the layout other than in the backdrop. 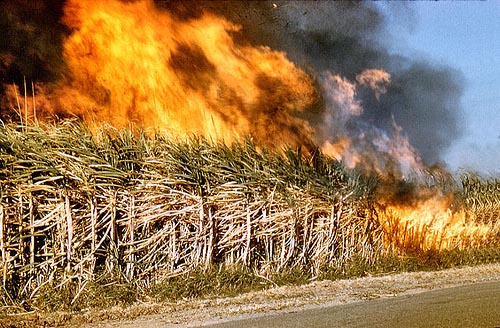 Impressive, but I would not suggest modeling it! Photo from flickr

The tractors and the cane wagons: There are several tractors in the Walthers catalog that would work; most are assembled. For the cane wagons, you would have to modify the available models of farm trailers with rubber tires. As you can see in the photo below, this would not be that hard, you would need at least 12 to make your cane field look correct. The models of the loaders are going to be more difficult, you might need to scratch-built them. 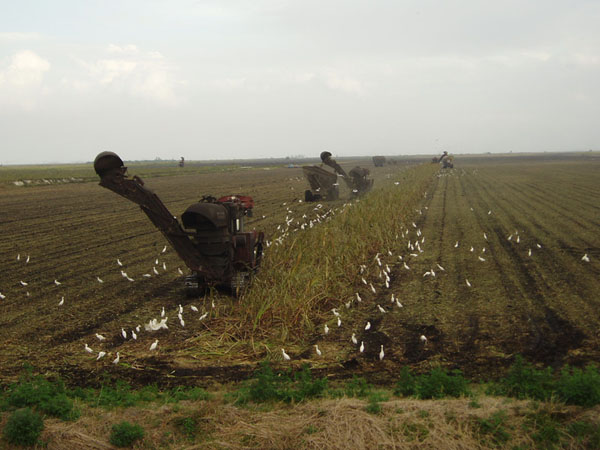 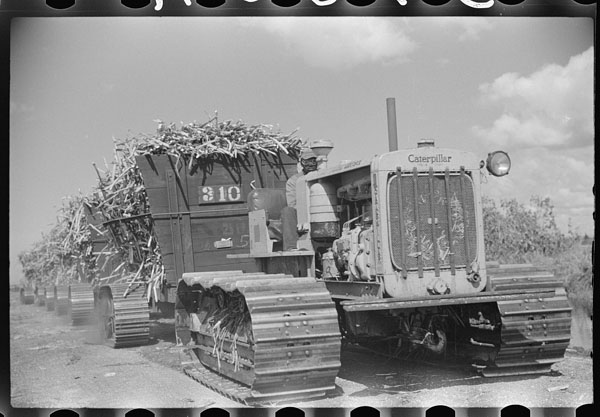 The railcar loaders are also a challenge. There is a ramp that the tractor and wagons drive up to get to the unloading hopper. Here the cane is dumped into a hopper, and a conveyer loads the cane into the rail cars. The whole facility is similar to a truck-to-rail coal tipple. The track layout is a double-ended siding with a car puller at one end. This enables the cane gondolas to be pulled through the loader without the need of a locomotive. A normal set out would be 12 or more cars. This should be scaled back to 5 to 7 cars on the layout. Once the cars are all loaded, one of the cane jobs would make the pick-up. A normal train would return to the mill with 100 or more cars on the USSC trains and 50 cars on the SCFE trains.

If you are into modeling locomotives and rolling stock, and love to modify and super detail them, then the sugar cane equipment would be a natural. The locomotives are easy. All the models that are owned by either USSG or SCFE are (or were) available. Plus, the detail parts needed to model the various versions of the locomotives used are readily available from several suppliers. 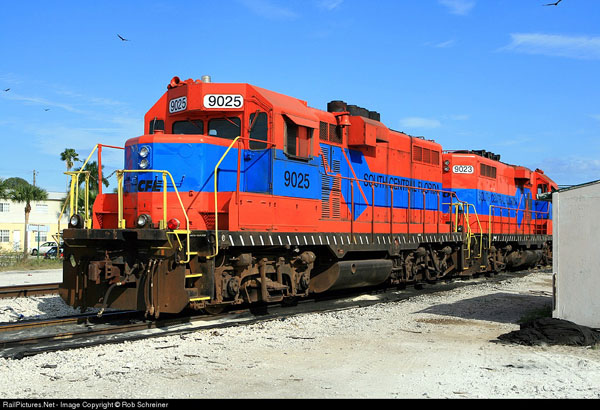 Here is an example of a SCFE GP-11 complete with chopped nose. The former IC Paducah rebuild offers
numerous ways to modify and super-detail a stock GP-9. Photo by Rob Schreiner from RailPictures.Net 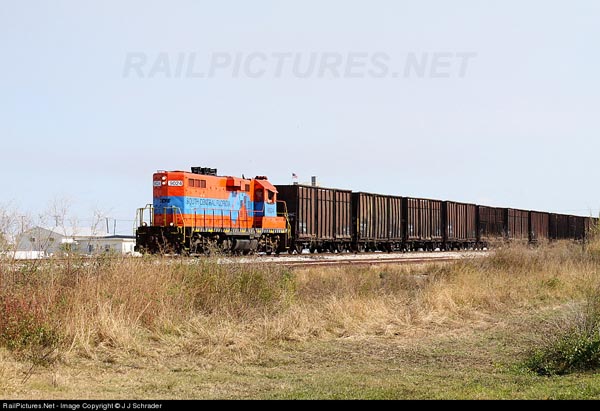 The high side cane gondolas will be a much harder project. Other than truck and the underbody
they need to be scratchbuilt from the floor up.  Photo by J.J. Schrader from RailPictures.Net

As shown in the above photo, a string of empty cane gondolas are behind a SCFE Geep. These are the newer all-steel cars. Note that the cars do have some differences in the vertical side bracing.

One can utilize some kits that are available today, most notably the Walthers Rolling Mill. This kit can be the starting point for many of the buildings at the Clewiston Mill. 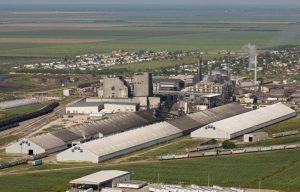 Another view of the Clewiston Mill. Photo by U.S. Sugar

The next step would be to get a Plastruct and Evergreen catalog and “go to town!” There are plenty of tanks, catwalks, and stacks that these two suppliers have, not to mention corrugated siding for all those buildings. Walthers has many industrial building detail parts for the fishing touches. 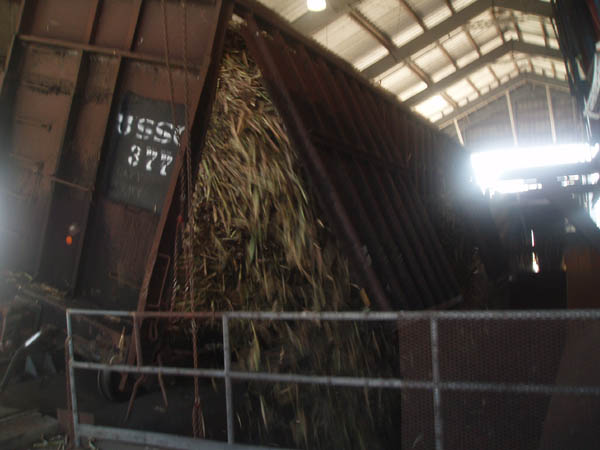 Here is a view of raw cane being dumped inside the mill. Notice the car is being tilted and that one side of the car is hinged so as to allow easy dumping of the cane. This building is located on the back side (south side) of the mill, at the end of the railroad yard. As you can see it has a pitched corrugated metal roof.          U.S. Sugar photo

Trains of empties go out into the fields and make their set-outs, dropping cars off along the way. At the end of their respective run, they will work their way back by picking up the loaded cars and returning them to the mill. The yard jobs then move the loaded cars over to the dumper and return the cars to the yard to be picked up by the next outbound train. Both USSC and SCFE trains originate and return to the Clewiston yard. All yard work is done by USSC locomotives and crews.

Refined cane products are taken out by SCFE trains destined for either Sebring or Fort Pierce. These trains consist of tank cars, covered hoppers, and box cars. Other cars from SCFE on-line industries include flat cars, pulpwood flats, and coal hoppers. The coal hoppers are destined for the Florida Crystals Okeelanta Mill. This mill is located 20 miles south of Clewiston and has the capability of producing electricity from sugar cane waste and coal. This is at the very end of the SCFE trackage.

Building a model railroad that follows the Florida sugar facilities—trains and operation— would be fun, and it would take time. SMARTT  has the experience and skill to build a model railroad sugar cane empire in any scale you want. So if you liked what you’ve read or have some other theme you would like to see realized as a model, contact us, and we will make that dream come true.