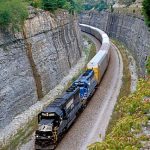 If you are a modeler of the Southern Railway and love spectacular scenery, you may want to model the CNO&TP. Modeling this railroad would be a rewarding project for Southern, Norfolk Southern, and freelance modelers. Southern modelers can have the option of modeling the railroad as it was prior to the early 1960’s, or from that date up to the time the NS came into being in the early 1980’s. For freelancers the railroad offers so much in the way of scenery it can be used as an inspiration for any model railroader who loves Appalachia.

For those who would model the earlier years, you could have rollercoaster terrain with many tunnels and bridges. Steam and 1stgeneration diesels ruled the rails. Steam Locomotives on the CNO&TP were equipped with special smoke deflectors mounted around their smoke stacks. This was done to try to prevent locomotive crews from being overcome by coal smoke in the many narrow tunnels. Passenger trains were still a major part of the railroad with steam and diesel locomotives painted in Southern’s famous green and gold scheme inspired by the Crescent Limited. This era was also when the Southern RR started to experiment with the first high horsepower six axle diesel locomotive, the SD24. 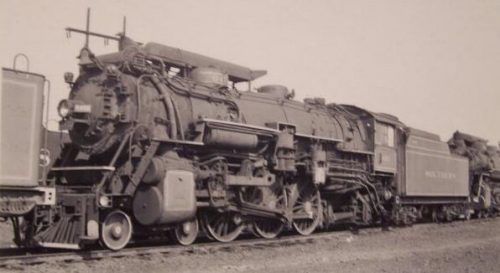 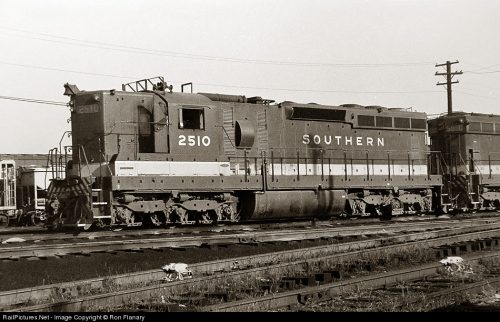 On the diesel side of the Rat Hole, SD-24 were equipped with special roof mounted ice breakers that protected their air horns from ice in the many tunnels on the line.  Photo Ron Flanary Railpictures.net

Steam came to an end on the CNO&TP/Rat Hole on June 17, 1953 with class MS-4 2-8-2, # 6330 pulling the last freight train on the Southern.  From that time on, diesels ruled the rails and improved the working conditions of the train crews.  Steam locomotives that were predominant on the CNO&TP included 4-6-2, 4-8-2, 2-10-2 and 2-8-2 of various individual classes. However the 2-10-2 did not stay on the CNO&TP very long, they proved to be too big for the tight clearances for those Rat Hole Tunnels. They were soon (1920’s) transferred over to other Southern Railroad lines ASAP.

The last steam locomotive on the Southern’s Rat Hole 2-8-2 # 6330 at Oakdale, TN (above) and Roddy, TN (below). Note the double spout water tank between the two mainlines.
This would make for an interesting but easy to build water tank. The coal train has a new set of green and white F-3’s for power. Both photos Southern Railfan.net.

Passenger service on the line was good up until the late 1950’s, with the last passenger train, the Royal Palm, running until 1968. During steam days the classic PS-4 4-6-2 dominated with TS 4-8-2 also providing help. Diesels were lead by EMD E and F units; however, it would be two ALCO models that would stand out among CNO&TP passenger power, the DL109 & DL110 and PA-3. The only other Alco DL109 or PA’s in the South were those of the Gulf Mobile & Ohio. 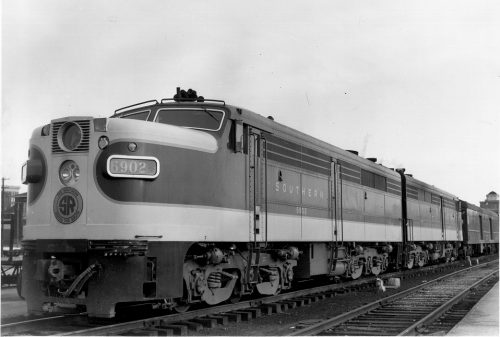 Passenger trains on the line used one of the best known Art Deco stations in the country, Cincinnati Union Terminal, or CUT for short. Here was Southern’s gateway to the North and Midwest. PRR, NYC, C&O, N&W, and the L&N joined the Southern at CUT. Here passengers could make the connection to Chicago, New York, and points east, west, and north. Modeling CUT would take some skill and space, with its ART Deco dome and façade and numerous tracks. Head-on the station looks more like a modern art museum (what it is today) then a passenger train station.

CUT in the 1950’s, thankfully the building was saved and is now the
city’s art museum. Photo, Model Railroad News.

At the south end of the line, Chattanooga had an even more historical station. What is now called the Chattanooga Choo Choo (named after the famous train song) was built by the Southern Railroad in1904 and named Terminal Station. The station would be a lot easier to build then CUT, however, most model railroads would have to scale down the size of both the building and the track layout. Putting the time and effort into constructing these two stations would make for very impressive end points to your model railroad. 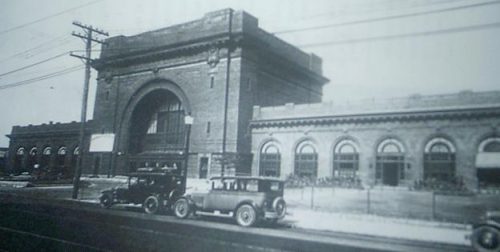 Another interesting station is the one at Danville, KY. This is where the line to Louisville and St. Louis diverges. Danville has a fair size yard and the station now serves as its yard office. The station, like the CUT and Terminal station, would take some skill in building, however it would take considerably less space. 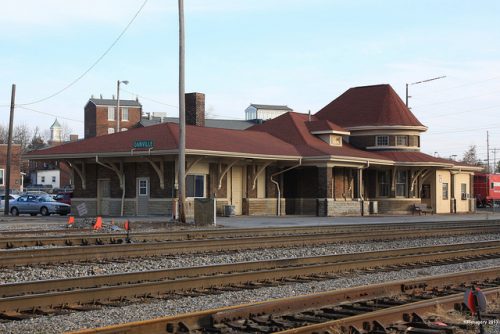 For those who would model CNO&TP/Southern during modern years, modelers would need to update the scenery, bridges, and structures.  As stated earlier, most of the tunnels were daylighted and the bridges rebuilt. The two large stations no longer have railroad functions, CSX’s Queens Gate Yard stands adjacent to CUT, on the space where the old station platforms are now the NS container terminal. Terminal Station is now a hotel, the famous Chattooga Choo-Choo, and has little outside railroad activity. However it has been the beginning or end point for numerous Southern RR steam specials.  It was the turnaround stop on 611’s last public excursion back in December of 1994 from Birmingham AL.  The main yard in Chattooga for the Southern/Norfolk Southern is the huge De Butts hump yard, located just south of the Tennessee River. 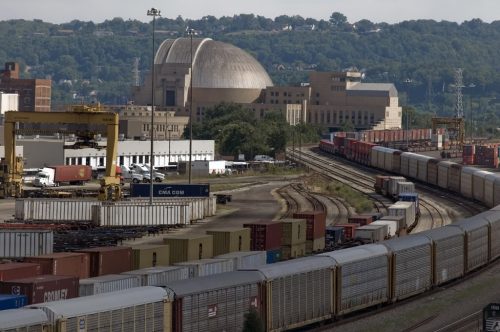 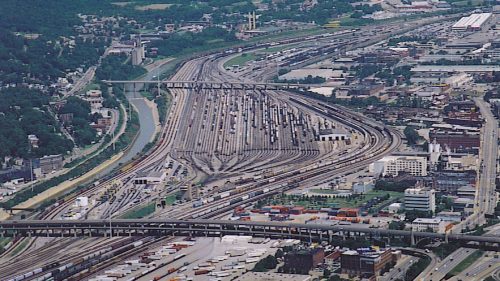 Highlighting a modern CNO&TO would be the huge cuts that were made when the tunnels were daylighted and the massive new bridges. This is where a Rat Hole layout would look the most impressive. The cuts are very colorful with the green of the foliage contrasting nicely with the various colors of the strata. Doing a Fall layout would highlight these cuts even more. Check the photo of Keno, KY in part 1 as an example. Kings Mountain is a very interesting example of one these cuts because the topography above the old tunnel is relatively flat. 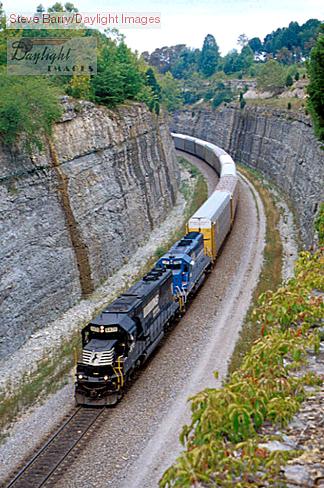 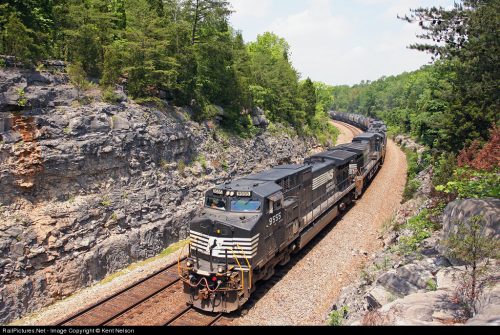 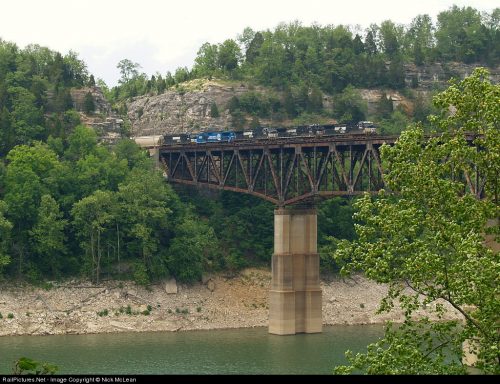 Another interesting cut is at Burnside, KY,(note the Southern Railway publicity photo in part 1 with the FT locomotives on the curved trestle). Here the old tunnel at the northern end of the new Cumberland River bridge has been daylighted, the tracks then proceed onto the long bridge over the river.

Those who do model the Southern and NS in the 1980’s could also include the return of steam to your layout with the two former N&W steam locomotive 611 and 1218. Other steam locomotives that ran in the Rat Hole during that time were the 4501 and 2716. Today’s NS modeler can include the various Heritage Fleet diesel locomotives and perhaps the current NS steam fleet of 765 and 630.It does not matter what time frame you chose, the CNO&TP/Rat Hole will make for a very beautiful layout. If you are worried that you don’t have the talent to do such a layout, just ask us; we have the ability to build anything your heart desires! 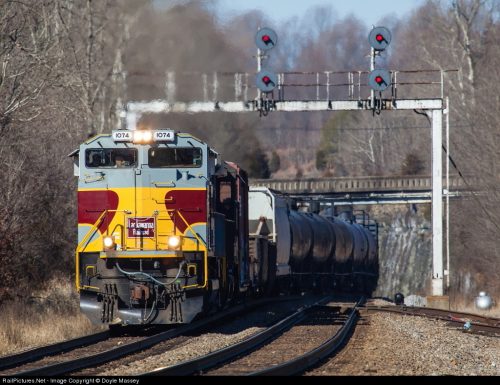