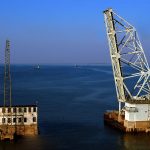 MODELING THE OVERSEAS RAILROAD THAT COULD HAVE BEEN

Yes, modeling the Railroad that Went to Sea has been done before. In a previous blog entry we talked about Calvin Winters’ Key West extension of 1930, and how he conducts his running sessions. Calvin models a specific month in 1930; everything on his layout precisely coincides with that time: structures, locomotives, and rolling stock. Suppose we create our imaginary “what if” layout as if the overseas railroad had survived into the 1950’s and beyond.  Our model railroad, like Calvin’s will start in Miami, but unlike Calvin’s it will start just south of the Miami International Airport, not in downtown Miami. Here the FEC and the SAL interchange freight cars. This is also where the FEC belt line to South Miami starts. Once in South Miami, the tracks rejoin the line to Homestead and then on to Key West.  If you want to model today, you could either go south on the old FEC branch to Homestead or use the SAL, now CSX, line to that city.  If you choose the old SAL route, you can rejoin the line to Key West in Homestead, all scaled down and condensed to whatever space you have.

Motive power would be the first real change on our model railroad. The real Key West extension died before the first diesel locomotives arrived on the property in 1939, the EMD E-3 for the Henry Flagler. The only motive power those bridges saw was steam locomotives. What a sight those coral, yellow, and silver E units would have made as they pulled a silver streamliner south. That’s one of the great things about model railroading, that you can build your layout as “what if. ”  The railroad itself would differ little from the earlier years; the Key West of 1935 would look very similar to the Key West of 1950. However, steam would be phased out by the middle 1950’s, and as previously mentioned, the railroad began to dieselize in 1939. Seeing a streamliner on one of the bridges pulled by an A-B-A set of coral, yellow, and silver E-6 would have been quite a site.  Modeling the railroad in the 1950’s compared to when Calvin modeled it, the major difference would be motive power and rolling stock.

Beyond the late 1950’s thing started to change in general, and by the 1970’s the lower keys started to take on a whole new look. After Hurricane Dona in 1960 the Keys went through a long period of no major storms. Even 1992’s Hurricane Andrew spared the Keys the devastation it brought South Miami and Homestead.  Development of the lower Keys started in the late 60’s and it keeps growing. This would have added more station stops to the route. Towns like Marathon and Islamorada would have added some kind of freight facilities, perhaps a TOFC or COFC yard, pulse a facility to unload rock and cement.

Key West would have lost its steamship trade to Cuba by 1961, including the railroad car ferry. However, it did start to receive cruise ships in the late 1980’s and today it sees some of the mega-cruise ships that ply the Caribbean.  A container terminal could be added to the port and with the completion of the Panama Cannel widening project, container traffic could explode. This would bring long trains of containers pulled by the latest high horsepower diesels to the railroad. An interesting sight would be a trio of SD-70m and a mile of doublestacks on the seven mile bridge. For our model railroad it would be two SD-70m and 15 doublestacks.  A large container terminal would be a nice addiction to our alternate Key West, complete with a container ship and container cranes.

Many of the structures that stood at the time of that first train in 1912 are still there. And don’t forget no model of Key West could be complete without “Sloppy Joes,” probably Key West’s most famous watering hole.  The old station that stood there would have been declared a National Historical Landmark and would have been restored to how it looked when it was built. A model of today’s Key West would not be complete without a vignette of “Fantasy Fest,” the city’s version of Mardi gras. The modern Key West would truly be a mixture of the old and the new.

The bridges and signals would also need to be changed. The old center turn span bridge at Moser Channel might be replaced with a more modern rolling lift bridge. In fact, because of the boom in pleasure craft including sailboats, more movable bridges might need to be added. One project could be to add a lift bridge on the Long Key Viaduct. You could use the arched viaduct that connects Galveston Texas with the main land as an example; there is a bascule bridge on that viaduct. In fact some of the steel bridges could be or would have had to be replaced. You could use a mixture of the old bridges with some that have been replaced with more modern styles. The entire signal system would need to be replaced. The railroad had a simple block system. Today’s railroad signals would be the same as the rest of the FEC, an ATC system.

Unfortunately, one downer in modeling the Key West Extension if it existed today would be the passenger trains.  Long gone are those coral, yellow, and silver E & F units, replaced by Amtrak AMD 103’s, Amfleet coaches, and Viewliner sleepers. However, maybe the state would add a train between Jacksonville and the Keys with bi-level cars, similar to the California Surfliner passenger trains.

No matter how you look at the railroad that went to sea, both real and model, it was unique. There is today and never has been a railroad quite like it. Today we can only dream of what it would have been like to ride on the back platform of the observation car with a rum and coke, or have dinner in the diner while the train leisurely crosses the seven mile bridge.  Unfortunately we can’t bring the real railroad back, but we could choose to make it into our model railroad.