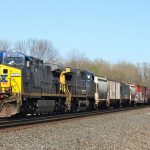 Modeling Trains Part II – Some Freight Trains you can model

Freight trains come in many shapes and sizes.  They can be as short as a locomotive pulling a single freight car with a caboose or as long as a 150-200 car manifest train. Here are some of the terms railroaders and modelers alike use to refer to their freight trains: Manifest or general merchandise, unit trains, way freight-peddler-turn-switcher, transfer, maintenance of way or MOW, and mix trains. These make up the majority of types of freight trains. Let’s take a more detailed look at these types of freight trains

The manifest or general merchandise freight is the oldest and the most common. This is still the most popular type of freight train with model railroaders. Prototypically modeled, a manifest freight could include every type of freight car of its era, including piggyback or container cars, as well as MOW cars being ferried to their next assignment. However, most refer to trains carrying the basic 10 freight cars; box, refrigerator, tank, chemical, gondola, open hopper, covered hopper, flat, auto rack, and caboose. These trains can be very long with many of their cars pre-blocked that could be dropped off at various locations along the route.  The locations could vary from a small city and town, to large industry. Other manifest freights run between the railroads’ large classification yards. Here they are broken up into smaller local/peddler trains or are switched into other manifest trains of various destinations. In large city terminals where there are many railroads, they could be transferred to trains of other railroads. Manifest freights could be hot-fast-high priority trains, or they could be slow drag freights. Unit trains are divided into two categories. The first category is trains that are dedicated to carrying one commodity such as but not limited to coal, grain, chemicals, or aggregates. They can originate at a single loading facility such as an oil refinery or coal mine, or they can be made up in a large classification yard, for example a grain train. They are usually bound for a single unloading point, a power plant for coal or a port for grain; these represent two very good examples of unit trains. However, there are trains that fall under this category that are made up of two or more different types of cars. Auto parts trains are a good example of this. They would carry large high cube box cars, flat cars with auto frames, and empty auto racks. You may also see tank and covered hopper cars. The second category of unit train is a train made up of cars that are designed to carry containers and/or highway trailers (piggybacks). Today, the most common solid unit train is the double stack container train. These are also the hottest freight trains on the railroad. Out west it is not uncommon to see two mile long double stack trains rolling at 60 plus mph.

One other unit train that falls into the category of highway trailers is Norfolk Southern’s Triple Crown service or Roadrailer. The equipment used in this service is unique in that instead of the highway trailers being placed on flatcars, the trailers are equipped with special railroad truck bogies that are placed under the trailer, just behind the highway tires. This gives the railroad more flexibility and speed when it comes to converting from railroad car to highway vehicle. Amtrak, CSX, and Conrail have used Roadrailers in the past. Conrail operation was incorporated into NS after the merger. CSX and Amtrak discontinued operating Roadrailers for various reasons. I believe NS runs some joint Roadrailers with the Union Pacific and BNSF railroads. Note the special truck bogie at the end of the highway trailer, photo Joeshaw@krunk.org Way freight, peddler, turn, and switcher, are all terms used to describe the bread and butter end of the freight train. These are the trains that go out and do the local chores of switching lineside customers on the railroad. These trains can be as short as one car or as long as dozens. They are assigned specific territories that could be as far as 100 miles from their home. Some will even lay overnight at the farthest point and return the next day. Others only venture a few miles from home. Today, this type of train has been reduced a great deal on most railroads. As more and more companies switch from boxcars to containers or highway trailers, way freights have become less necessary. Most railroads welcome this because way freights are much more expensive to operate. Next Time:  transfer, maintenance of way, and mix trains.