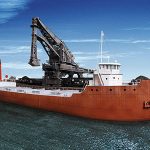 For years you would have needed to be an advanced scratch-builder to create marine models for your model railroad layout: ships, boats, barges, and the facilities themselves. Now there are more and more kits available on the market that recreate these interesting prototypes. Walthers came out with a series of kits ten years ago centered on modeling a harbor. There was a car-float and car-float bridge, a railroad tug boat, a large dock with a traveling crane, a terminal building, and a warehouse.

These models open the door for the average modelers who are not skilled scratch-builders to have a waterfront scene on their layout. At the same time, other companies were releasing marine models. Sylvan Models produced the first model of a large vessel when they came out with their Ore Boat kit in the mid-1990’s. Not only did this kit have parts to do a complete Ore Boat, but it was designed so that a modeler could expand the original size of the boat by adding extra center sections that were sold separately. This would allow a modeler to make an ore boat from 290 feet (basic kit) to a 400-600 foot boat, much closer to the size of ore boats of the 1930’s to the 1950’s. 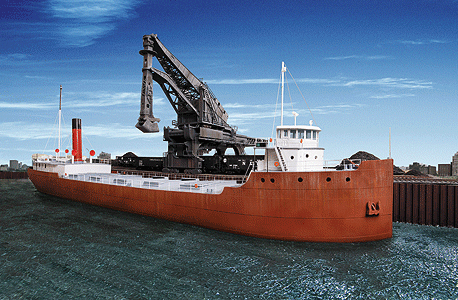 The other facet of this kit was that it lent well to kitbashing. I have built three different types of vessel from this basic kit, including two general cargo ships. I have also explored the idea of using this kit to make an oil tanker. With the success of their ore boat Sylvan has followed up with two new large kits: a Great Lake/Ocean Tramp Steamer and a Wood Hull Lake Freighter. The latest addition to the marine model market is the Hulett, a Walthers Cornerstone kit. The Hulett is used to unload ore boats as shown above.

Sylvan released a Tramp Steamer a few years back. Even though it is based on a lake freighter design, it does very well as an ocean-going ship.  I have not built the Tramp Steamer kit, however, we do have one in our inventory at SMARTT , and it looks like a very good model. Sylvan has also produced three different types of Tug Boats, a coal barge, as well as other marine items including channel marker buoys.

Bearco Marine is another manufacturer of ore boats, including kits of the modern version of that type of boat. Check your Walthers catalog for more marine items, plus visit your general hobby shop for some ship and boat models that are close to the scale you model in.

In Part 3, we’ll explore the operation of your model seaport.