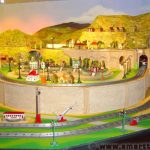 Everyone loves to watch a miniature train run through tiny towns, cities, forests, and mountains. People of all ages will stay for hours watching, wishing, and dreaming that it was theirs. Some stay because they are fascinated by the detail, while others dream about another time and place in their lives. Museums, malls, and department stores have all found that a model train display is not only a great attraction, but a way to tell the story of our history, illustrating how railroads played a significant role in helping to promote a better life for us all. SMARTT has participated in many projects that have echoed these themes. Here’s a look at a few.

When the Ringling Circus Museum in Sarasota needed very large background buildings for their new Tibbles miniature circus display they contracted with SMARTT to build them. These structures were much larger (1/16 scale or ¾” = 1 ft) than traditional model railroad scales. We produced a 60 foot long string of these scratch-built buildings averaging 3 – 4 ft high. As these structures were part of the back-ground, we consciously toned down on super-detailing them so as not to overpower the foreground elements.

Thomas W. Sefton, the owner of one of the largest and most valuable collections of Lionel Prewar Toy Trains and Accessories, donated his entire collection, to the California State Railway Museum in Sacramento, California. Many of the artifacts that made up this collection were in mint condition. The best and the rarest of these artifacts were slated to be used in the centerpiece display of the exhibit – a reproduction of the toy train layouts of that era. SMARTT was sub-contracted to build the layout.

This proved to be a challenging project for SMARTT. With the focus on highly detailed and realistic layouts that most of our clients have demanded, this project was quite a unique and exciting departure for us. We were required to use the style and techniques of the Pre War era. Planning and producing it all this way was like stepping back in time.

There were to be no highly detailed structures or highly realistic scenery. Mountains needed to look like they were made of papier-mâché; roads, grass, even the track ballast was strictly painted on the layout surface. The structures were all original tin-plate models. There were houses, stations, and even a roundhouse.

The only things that were not original were the trains. These are modern day replicas since, in order to have reliable operation, they had to be state of the art reproductions.

The original antique trains of The Thomas W. Sefton collection remain on display, behind glass.

Chicago’s Museum of Science and Industry has one of the largest model railroad displays in the world. The original O Scale layout was begun in 1939 and was financed with a $58,000 grant from the AT&SF Railroad. The original layout was twice upgraded in1953 and again in 1988 – the latter was once again financed by the Santa Fe Railroad.

After more than 60 years of continuous operation, the layout was shut down in 2002. The museum wanted something new and fresh. The new layout was to be in HO Scale. At almost 100 ft long and 65 ft wide at its widest points – again this display would be one of the largest model railroads anywhere to be found.

The project was funded by donations from various sources including AT&SF’s successor, Burlington Northern Santa Fe. Overall the new project was funded with over 3.3 million dollars in donations. The new layout opened to the public in November of 2002.

The over 3,500 square foot layout features 30 trains running on 1,400 feet of track, numerous bridges and a very sophisticated signal system. These were all part of the items SMARTT was responsible for. SMARTT also built all custom designed interactive operating features including a model of a container ship, a container crane, an operating steel mill, a draw bridge, an exploding tunnel excavation, and even a tree falling in the lumberjack vignette. This was a monumental project with a construction schedule of only 10 months. SMARTT collaborated with other contractors to meet the tight timetable.

Being in Florida, SMARTT’s unique CAD designed and CNC machine cut custom benchwork, track planning and electrical engineering proved its unparalleled worth. Fourteen 18 wheeler tractor trailer trucks hauled the layout sections up to Chicago piece meal over a six month period as they were completed. Only on location at the museum itself was the entire layout assembled for the first time. It fit together like a glove and was fired up in a matter of days!

In June of 2004, the Aventura Mall in Aventura, Florida, which is part of greater Miami, wanted a holiday model train display, and they wanted it loaded with unique, automated animation. After nearly three months of collaborative planning and design considerations, we began construction in mid September. With a monumental effort, the project was completed and installed in 10 weeks, just in time for Thanksgiving.

The layout has countless features and tons of action – too many to talk about here. The best thing is to watch the video – or better yet – put a visit to the mall to see it on your to-do list if you come to Miami. A couple of notable features are a large yacht that is hosting a very swank party, an animated ice skating rink and candy store, and even a band shell with animated musicians and singers. But that’s only part of the thrill. There is an automatic railroad drawbridge that raises and lowers, and animated gym where bodybuilders show how easy it is to work-out, and even an airport complete with an executive jet taxiing down the runway, ready to take off. All this while 6 trains run on 5 separate main lines, plus a street car line!

This exciting attraction has been on display every year for the last 6 years. Every November the layout is brought out of storage and reassembled in 6 to 8 hours. Just like Santa, we arrive at the mall close to midnight, put all together, and the next morning there it is, ready to go — heralding in the start of the Holiday season.

For thousands of shoppers who flock to the Aventura Mall, many purposely make their way through the mall see the train layout time and again. That’s part of its magic. People are always finding new things on the layout to marvel at. The “Aventura Station” as it is called, has becomes a gathering point for frequent mall shoppers, and even better from the mall’s point of view, has helped attract new patrons. The sights and sounds of so many trains and so many animated accessories have enchanted people of all ages.

SMARTT completed and installed this department store display back in November of 2003. The layout continued the tradition of a Christmas train display at Macy’s that many older folk may remember from times past. SMARTT partnered with Mike’s Train House (MTH) on this project. Representing a holiday theme, this layout features several MTH trains running on multiple levels in a winter dominated scene. Even though this earlier model did not have the sophistication of the more advanced Aventura layout, it still had its share of animation. Like Aventura, numerous shoppers would stop by to experience the Christmas model train tradition. It is a wonder how many young children would look at those trains at the Macy’s display wishing Santa would leave one under their tree on Christmas day.

Both Aventura and Macy’s invoke memories of Holidays past. How many of us got started with model trains by those train sets that got left under the tree? I for one woke up on a Christmas morning to find an American Flyer-Silver Flash train set. I was only 15 months old. That set would go up every year, and eventually it grew into a large AF collection. The AF collection ended up leading to an even larger collection of HO trains, over 150 locomotives, including over 50 in brass. Model train displays have always been a great way to promote the hobby, and one that includes a great deal of action always brings out a crowd!

Banco Popular is promoting the idea of building a modern urban tram system for San Juan, Puerto Rico. The bank’s idea is that such a system would help ease congestion, noise pollution, and air pollution in the Old City section of San Juan, The tram system would be based on the one in Barcelona Spain.

This concept, was fostered largely by Banco Popular’s president, who believed that a great way to promote this highly beneficial idea was to feature an operating display of the proposed tram system in the bank’s head office main lobby mezzanine in downtown Old San Juan.

This would require accurately detailed architectural models of many of the focal points in Old San Juan. It also needed a sophisticated model railroad control system for the trams so that they would all work automatically. The track system would be doubled tracked, with the capability of operating 3 trams on each line at one time.

After several months of planning and research, construction on the project began. We received hundreds of reference photos from the Banco team in PR. We also incorporated numerous references from Google Earth. By combining all this data, we came up with an accurate reproduction of the area of San Juan that Banco Popular wanted to display. Features include a model of the Capital building, numerous government buildings, hotels, restaurants, houses, and even a part of the old fort. The trams meander their way through the old city, avoiding traffic jams while the miniature people stuck in their miniature cars look on.  Sound and lighting effects bring everything to life.

Today the layout is part of a very impressive overall display to promote the tram system for San Juan. For now, the streets of San Juan are clogged with vehicular traffic. If a tram system is built, it will go a long ways to help in eliminating that problem and doing it in a green way.  SMARTT is proud to participate in such projects as the one for San Juan, one that goes beyond just one of enjoyment but one that could lead to solving an important problem for the people of San Juan. SMARTT has taken on numerous projects over the years and those projects have comprised many different themes. Be it a holiday display, a museum, a personal layout, or a municipal project, we have met the challenge.