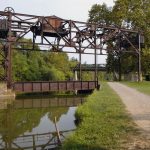 There are so many items available now in all scales of model railroading. Never in its history has there been so much to choose from. However, there are always things that we specifically would love to see released that have never been.   Here is my list of 10 items I would love to see made available. My picks are all in HO scale as that is what I model in.

Ok, what’s on your wish list? What do you want to see in models over the next few years?

Joke of the Month

A few years ago a model railroad friend was telling a story about a Baldwin RF-16 Shark that derailed at Horseshoe Curve and landed in the Altoona Reservoir below. The headlines in the next day’s Altoona Mirror read; “SHARK FOUND IN ALTOONA RESERVOIR”.

A few months later he was back at it, this time it was a GE U-25C that derailed and ended up in the reservoir. You guessed it, the headlines for that one read; “U-BOAT FOUND IN ALTOONA RESERVOIR”.