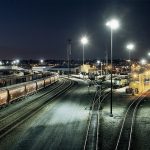 How many of us remember how much fun it was to run our American Flyer and Lionel passenger trains with the lights turned off.  All the locomotives and most of the passenger cars were illuminated, with the passenger cars having silhouetted figures in the windows. We also illuminated our structures (mostly Bachmann’s Plasticville line of O/S buildings) with small light bulbs.  Adding to the trains and buildings were Lionel or American Flyer street lights, yard flood lights, flashing railroad crossings, and various railroad signal lights. All this illumination gave our model railroad empire a whole different dimension; yes, running trains in the dark was both fun and exciting.

Today that dimension has expanded way beyond anything we could had imagined back in the 1950’s or 60’s. Those passenger cars, whose lights would glow bright, and then dim as we increased or decreased the power to the tracks, now have constant lighting. Even when the train is at a complete stop, the lighting in the cars remains at a constant level. Locomotives have illumined marker lights, class lights, and simulated Mars Lights. Some modern locomotives even have roof top flashing lights, and let’s not forget those model railroad versions of FRED’s (flashing end of train device) that really flash.

But the trains are only the tip of the lighting iceberg. Buildings can now be illuminated with LEDs which increases interior realism 100%. On the exterior, you can adorn your structure with a large assortment of simulated neon signs including both those that run and those that flash.  From an animated barber shop pole to that famous CITGO sign behind the Green Monster at Fenway Park, they’re available in several different scales.

Signals are now made to match those particular to a specific railroad; for example, both styles of positions lights are available for Pennsylvania and B&O Railroad’s prototypes. There are C&O cantilever signal bridges, Santa Fe semaphores, and SP target signals, and they are all designed to work just as the prototypes did.  Just think how all of these new innovations in electronics add to a night scene on a model railroad. In fact the vast majority of our clients asks for illumination and signals to be included into their projects.

So why are we so fascinated with night scenes on our model railroads? Perhaps it comes from our own memories of riding a train at night; I do remember how fascinating it was to see cities and towns flash by my window at night. Here are some of the scenes I remember vividly: The illuminated sign on the side of the Southern States grain elevator in Richmond Va. as we rode over the Seaboard RR James River Bridge.  Or that solitary farm house with a single light on, seen off in the distance through the trees would always bring a sense of wonder.

But most of all, it was those tall flood light towers illuminating those massive railroad yards; seeing that a railroad never sleeps was most evident in these railroad yards.  One that stands out the most is the Seaboard RR yard at Hamlet, NC. This was the largest hump yard on the Seaboard, and at night it looked that much bigger. Years later,  in 1998, I did a model train show in Raleigh, NC. On the way up we stopped in Hamlet to check out the yard. Driving around the facility confirmed what I remember from riding the train, it was every bit as large during the day and in a car as it was by train. I do want to point out one shortfall in the available items that have to do with illumination. Other then the O gauge line of 1950’s remakes, there are no ready-to-run scale models of flood light towers in any scale. This is one of few prototypes that have never been mass produced in either plastic or brass. Walthers, OMI, etc. take that into consideration as a future project. 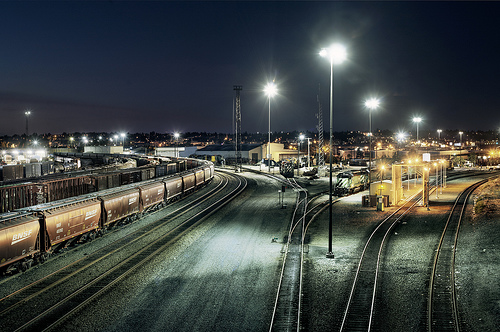 No story about trains at night would be complete without the name of the master of night time railroad photography, O. Winston Link.  Link set out in the late 1950’s to record on film the last steam railroad in the United States, the Norfolk and Western. By 1957 the N&W had finally announce that it would be replacing its large fleet of modern steam locomotives with diesels.  Link, a well known commercial photographer who had his own studio, decided that this project needed to be done and that a great deal of his work would focus on night scenes.

This would be no easy task; Link had to develop a new and innovative way to do night photography for the scale that he wanted. His technique would sometimes employ 50 or more number 2 flash bulbs.  It would take Link hours to set up his equipment, for everything had to be right, there would only be a single chance for one shot.  Once he settled on the equipment and technique he began his race to complete the project before the fires would drop from N&W’s last steam locomotive.  That would happen in May of 1960 when N&W Y-6b #2190 finished her mine run; she dropped her fire and went dead.  No N&W steam locomotive would go hot until August of 1982, when N&W class J #611 set out from being rebuilt in Birmingham, AL for Roanoke, VA.  O. Winston Link was present for that event.

One project I would love to do is a vignette of O. Winston Link, his crew and his equipment out along the tracks ready to do a night shoot. This would be an animated vignette time to have the flash equipment go off when a train passes.  This would be easier to do in O scale then HO, either way the flash equipment would have to be scratch built. To go even further would be to do a complete scene from one of the prints; the people at the swimming hole would be my favorite.