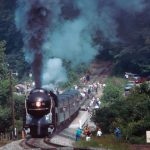 It was a cold evening in early December of 1994. A light rain was falling as I waited at a grade crossing on the south side of Chattanooga, Tennessee. Earlier that day, I arose before dawn to make a fast trek down to Birmingham, Alabama.  It was to be the last excursion trip for N&W class J 4-8-4 steam locomotive number 611, because, Norfolk Southern had decided to pull the plug on their steam program. NS would now stand for “No Steam”! After a run of 28 years no longer would people in the southeastern U.S. be able to experience what main line steam railroading was all about.

I arrived at my first shooting location, and got off several quick shots before it was back on the road; the chase was on. The excitement of the chase quickly made me forget that this was a very sad day, that this was the last run.

If you have never chased a steam train before, you would be in for a real treat. Especially when it’s on a two lane country road that is quite hilly and very serpentine. The object is to get to as many quality shooting locations as possible. That means you must drive down some very unfriendly and unfamiliar roads, at extremely unsafe speeds. You are also out there with a hundred plus other railfans all trying to beat the train and you to the next photo location! When they restored the Southern Pacific Daylight train, GS-4 steam locomotive number 4449 and 12 cars back in 1984, there was so many people chasing the train, it caused an 8 mile traffic backup into Klamath Falls, Oregon. Chasing steam trains, is nothing but total insanity, however, I would do it again in a heartbeat! 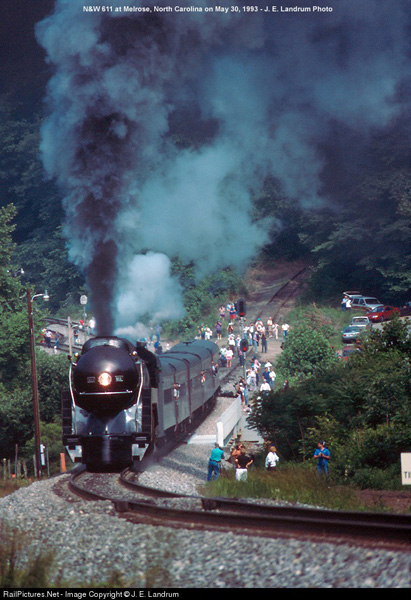 As you can see, hundreds would try to reach the same photo location for that perfect shot

The train 611 had in tow that day approached 30 cars; it seemed like every railfan in the Southeast was either on the train or out chasing it. After 611 ran all the way back to Chattanooga, she would be turned and serviced at the former Union Station, now know as the Chattanooga Choo Choo Hotel. Once at The Choo Choo, reality set in; the afternoon took on feeling of what could only be described as a funeral wake. I decided before leaving for home to pay my last respect to this marvelous example of American steam at what she did best, running at speed.

Standing in the rain at that grade crossing and hearing her blow off in the distance brought back to my memory our first encounter. Labor Day weekend 1982, Morey Farcus, and I were standing at the Blue Ridge Parkways N&W overlook. This was my first shot with JMJ Productions and it would become my most memorable. The morning was cool and clear. 611 was pulling a long passenger train up the Blue Ridge Grade bound for Norfolk, Virginia. For the first time in my life I experienced what a large steam locomotive could do with a heavy train on a grade; it was awesome!

Soon, I was jolted back to the present as I heard 611 quickly approaching, her head light appeared around a bend, and then in a flash she was gone. She passed by me as she has done many times before, as a speeding race horse. That night was one of the saddest of my life!

Fast forward to July 2, 2010, The Norfolk Southern Railroad announces plans to revive its steam program. The plan is to utilize three locomotives from the Tennessee Valley Railroad Museum;

All three are veterans of the original steam program. In fact it was the 4501 that got the steam program started back in the middle 1960’s under Graham Claytor. 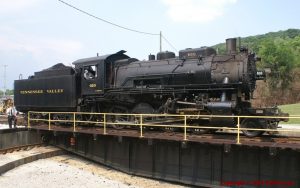 Norfolk Southern has launched a new web site www.21stcenturysteam.com (edit: as of 2017, this site is no longer available. A cached view is available at the Internet Archive ). With last fall’s successful inaugural trips with the Tennessee Valley Railroad Museum, NS announced plans for their 30th anniversary. The plans included a steam powered train to tour their major terminals plus painting 20 new locomotives in heritage paint schemes, those of their fallen flag railroads. However, the big celebration on July 4th which brought together all 20 heritage locomotives would be overshadowed by two events in August.

Robert Claytor had a dream of acquiring Conrail when he was NS CEO.  In an interview he gave back in the mid 1980’s, he promised if NS ever got Conrail, 611 would one day power an excursion train around Horseshoe Curve. NS’ acquisition of its portion of Conrail included the former PRR mainline from Pittsburg to Harrisburg, making that dream possible. Most of the people who made the original program such a success have all passed. Bob and Graham Claytor passed away before the program ended. Frank Collins, road foreman of engines, also passed away before the end. Jim Bistline, who was the only General Manager of Steam in the railroad diesel era died in 2005. We lost Bill Purdie in 2010. These five people brought to a new generation the image of what big-time steam railroading was like; this includes me. We should include one last person, a man who was not employed by any railroad, but whose photogphy was as much a part of the Norfolk and Western Railroad as anyone, O. Winston Link. Perhaps Mr. Moorman should go to the Roanoke Transportation Museum where both 611 and 1218 are on display. Maybe, just maybe he will hear a voice say, “If you restore them they will come.” 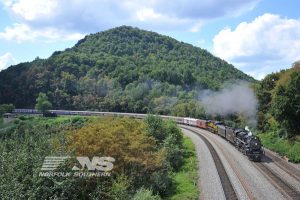 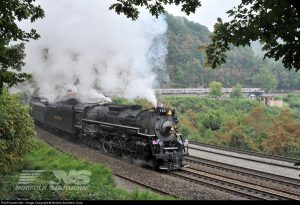