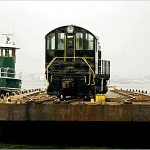 ON THE WATERFRONT: MODELING SHIPS AND BOATS FOR MODEL RAILROADS

In the movie On the Waterfront with Marlon Brando, we see numerous scenes of boats, ships, barges, and the facilities that serve them. We also see that around the waterfront there is a good deal of rail activity. Oceans, lakes, and rivers – railroads from their very beginning used rail to water and water to rail as a main source of revenue. Adding a waterfront to your model railroad will not only add to the visual interest of your layout, it will give you many hours of operational fun. 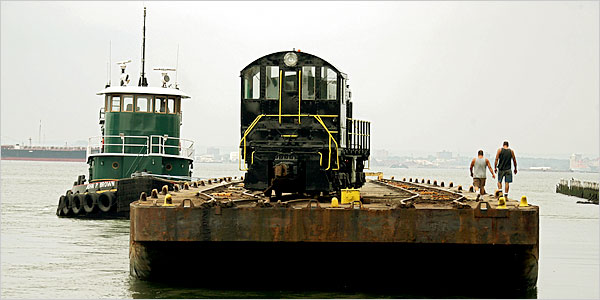 When ships put into port, they are immediately off-loaded either on to the dock or a barge. Many of these barges were owned by railroads, and they came in four different classes: covered, refrigerated-covered, hopper, or flat.  Some flat barges had their own derrick; these were called lighters, and they could load or off-load cargo without using the ship’s booms.  This would allow a ship to be loaded or off-loaded from both the dock and the barge at the same time. In some harbors, large gantry cranes would assist in the loading/off-loading of cargo.

In large cities, isolated railroad yards would be served by railroad car floats. These car floats would have either two or three tracks and could hold twenty or more cars. The reason for this operation was to move freight from large marshaling yards away from the city to small urban yards not directly served by any main or branchline. These types of operations were very important in New York and San Francisco. The car floats would be moved around the harbor by railroad owned tugboats. 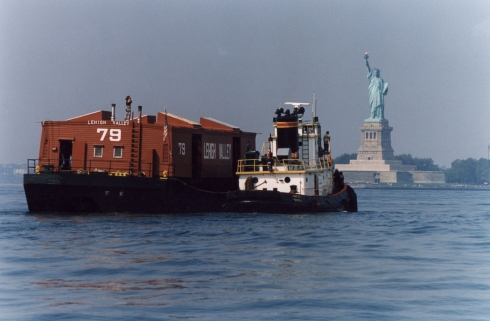 Today the era of the railroad barge and car float has been replaced by the container and the ships that carry them.  Huge ships, sometimes exceeding 1000 feet in length, now prowl the seas carrying everything from coal to petroleum to containers. In the nearby rail yard, long trains of doublestack containers roll in and out constantly, receiving and dispatching their loads to these huge vessels.  Even though the role that railroads play in and around harbors has changed, they are just as important as ever.

Great Lakes harbors predominantly had three types of operation: railroad car ferries, ore (iron and coal), and grain shipments. The shipment of iron ore was a huge operation on the Great Lakes up until the decline of the U.S. steel industry in the mid 1980’s. Most steel mills that were located on the Great Lakes would have their own harbor facilities complete with huge Hulett ore un-loaders. 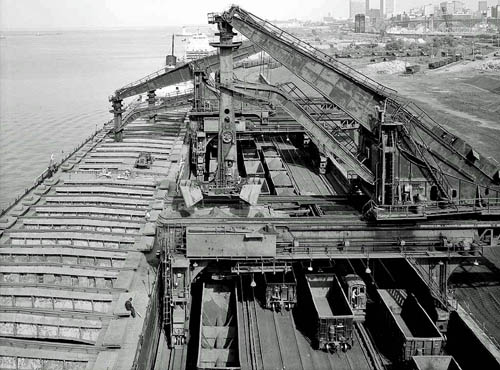 Let’s not forget the loading end of the Great Lakes iron ore trade. Located throughout the northwestern side of the lakes are numerous ore loading facilities. These huge docks can load up to 4 ore boats at once! Walthers did make a model of one a few years back. They still can be found on the internet. 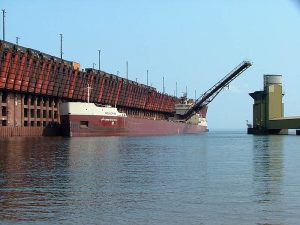 Here an ore boat is about to be loaded at one of these ore docks.
Photo by Lee Rowe / Boatnerd.com

There is also a fair amount of general cargo, lumber being important, as well as petroleum products on the Great Lakes. With the opening of the Saint Lawrence Seaway in the late 1950’s, seagoing merchant ships began to visit Great Lakes ports.

Rivers are predominately used to move bulk material such as coal, rock, petroleum, and grains.  Unlike the ocean and the Great Lakes where large self-propelled vessels transport cargo, the vast majority of river commerce is moved in barges pushed by special push-boats. The main artery for river traffic in the United States is the Mississippi river and its tributaries. One interesting aspect of this operation is the seaport city of New Orleans. Here many ocean going freighters transfer material directly to barges that navigate the Mississippi river system. However, railroads are not left out along this vast river network, for many ports along these waterways are dedicated to rail-to-water operation. 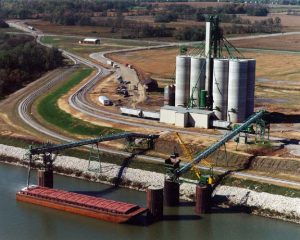 Coming up in part 2, what models you can buy to emulate Waterfront rail operations