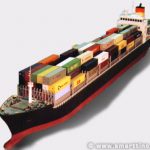 OPERATIONS ON YOUR MODEL RAILROAD WATERFRONT

To and from rivers, lakes, and oceans, cargo must be loaded and unloaded. Trains bring and take merchandise, ore, petroleum, raw materials, and finished products. Barges, ships, ferries, and boats could all fit into a model railroad operating session.

In Miami, Florida, there is a model railroad that is based on the old Florida East Coast RR – Key West extension. Calvin Winter’s operation revolves around unloading and loading the car ferry that ran to Havana, Cuba. His trains, both freight and passenger, leave Key West and head toward Miami. One such freight train, The Yellow Apparel – a train made up of all yellow refrigerator cars, is off-loaded from the ferry with perishables from Cuba. The passenger trains arrive and depart right at the dock in Key West.  This is to allow the passengers an easy transfer from the train to the ferry. This is just one example of rail to water operation.

SMARTT  has built several layouts in which our clients wanted some kind of waterfront activity. The largest waterfront we built had a full harbor with both a traveling gantry crane and an ore bridge crane to unload the ore boats.

We have also built a large grain elevator that was served by both rail and water. This was part of a model of the Cuyahoga River and the Cleveland Flats. Today we could incorporate Walthers new ore boat unloader, the Hulett, into these two projects.

In the opening scene from Steven Spielberg’s “War of the Worlds,” we see Tom Cruise unloading containers from a barge. A container port would make a good destination for COFC, TOFC and Double Stack trains. There has been talk that Sylvan would someday do a container ship. If not, you would have to build one from scratch. One of the features we built for the Chicago Museum of Science & Industry’s Great Train Story exhibit was a container ship and crane in the Seattle harbor. The ship was heavily modified from a display model hull that was purchased from outside the shop. We built a new superstructure and the hull was cut down and modified. We scratch-built the operating crane from acrylic and mechanical components. It would take some skill and work to go the modern container port route, but if you have the skill and desire, it would be well worth the effort. To the best of my knowledge there is no container ship or crane available in kit form in 1/87 scale. 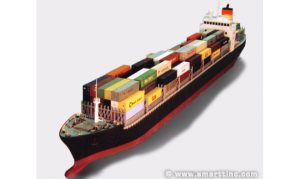 SMARTT-built  Container ship from the Chicago Museum of Science & Industry

Another unique operation would be the old warehouse districts located on or near the waterfront. Many of these locations had tracks running in the middle of city streets, with sidings branching off into the various facilities that would be served. One of the most famous locations of this type of operation was Fells Point in Baltimore. This is where the B&O Railroad utilized their two 0-4-0 dockside locomotives. The area was also served by the Pennsylvania RR. In these inner harbor locations, the architecture can date all the way back the early 1700’s, and in such locations as Fells Point, 3 and 4 masted schooners were docked into the late 1940’s. A very good book on this type of operation is Building City Scenery, by John Pryke. A good part of the book is dedicated to street operation around a city’s waterfront. 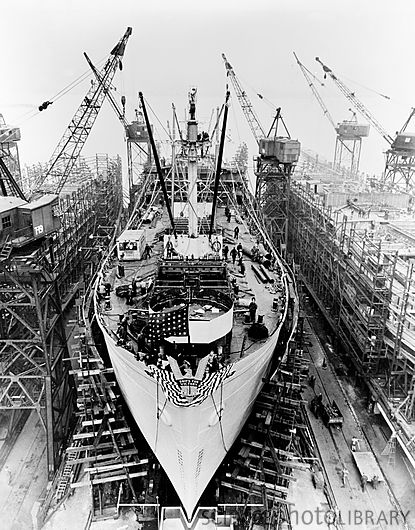 Construction of a Liberty ship. Historical image showing a Liberty ship being built at Bethlehem Fairfield shipyard, Maryland, USA. Liberty ships were cargo ships built in the USA during World War II. They were cheap, quick to build (being ready for launch after only 24 days) and came to symbolise US wartime industrial output. 18 American shipyards built 2,751 Liberty ships between 1941-1945. Photographed in April 1943.

A Liberty Ship sitting in the ways under construction (from sciencephoto.com) 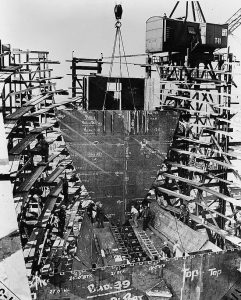 A ship bulkhead being lifted into place (from Wikimedia.org commons)

Two models I always wanted to build: one was a shipyard complete with a ship under construction, still sitting on the ways, or a completed ship in dry-dock. Here is where those large gantry cranes Walthers released ten years ago would look so good hovering over the hull and superstructure of an incomplete ship.  You might think that this would take up an enormous amount of room because of the depth it would take. However not all ships went down the ways straight, many a ship was launched sideways into the water.  This would mean you could do this scene in a space of 1’ X 3’ length wise. 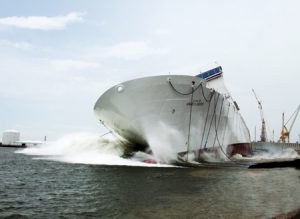 The other project would be a 1/87 model of a battleship. You might say that would be way too large for most layouts, right? However the U.S. Navy had a battleship in WWII that was only 562 feet long, about the size of an average to small ore boat. The Arkansas was an old, pre WWI battleship, built in 1912, that was in the Atlantic when the war broke out. She was the only U.S. battleship to have six 12” gun turrets. It served throughout the war and was sunk at one of the Bikini nuclear tests after WWII.  Its size would scale down to about 6’ long, doable in HO scale. Maybe someday it will be a project, but not right now. 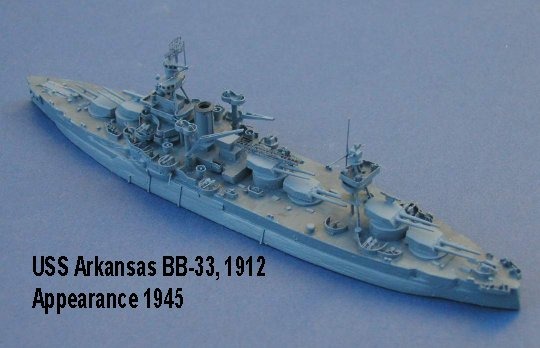 If only I could find a way to scale this up a bit!
1:1200 scratch-built USS Arkansas by John Youngerman
(photo from steelnavy.com)

Back to the real world of modeling, there is one last waterfront operation I want to cover. The use of ferry boats by commuters getting to work, traveling by train and then transferring to a ferry boat. This was a very common event along the Hudson River. Here thousands of commuters would arrive each day by trains, and then they would transfer to the ferry boats right at the same terminal. From these locations they would travel to various location in New York City and then on to work.