This featurette on the Just Luxe site, where Luxury shoppers go to find lifestyle hints, sports a number of big color pics from some of SMARTT 's coolest layouts.

Black Tie Magazine, the magazine of Society, Entertainment, and Philanthropy, does a half page profile on SMARTT in its Jackie Kennedy cover issue.

The Luxury Channel's blog takes a look at "Life in Miniature" featuring the stylistic creations of SMARTT and photos of the SMARTT Aventura Station layout.

A spectacular 7 page spread on the Super-detailed O Gauge layout SMARTT built for a client in the DC area.


Fulfilling the Dream
Article and Photos by George S. Kush 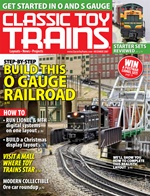 CTT goes to Aventura Mall to see the SMARTT - built Aventura Station layout, a holiday extravaganza of animation, sound, and of course, trains!

CTT visits the High-Tech SMARTT train Factory, where dreams and Dream Layouts are made. Everything you always wanted to know about SMARTT but were afraid to ask!

CTT visits the Railroad Empire of Paul Ilyinsky, former Mayor of West Palm Beach and descendent of the Russian Czar, Nicholas II. Yes, THIS is the layout with the custom six-track swing-bridge entrance!

"Working on the Railroad" features a piece on model railroading, including an interview with SMARTT founder Michael Hart.

Turning your vision into reality is what we do here at SMARTT !

Tracks Ahead, an emmy-winning nationally syndicated public television program based in Milwaukee.
Episode #6.14, segment 4 featured a profile of SMARTT.
Feature originally aired in 2006.