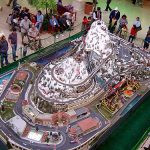 Public model train displays have thrilled families the world over for generations. Transcending all boundaries, smiling, wondrous faces abound - whether young or old, male or female, rich or poor - public model railroad attractions have always been a proven draw, helping any venue increase its bottom line!

Taking a cue from this proven success formula, every holiday season since 2004, the upscale Aventura Mall in south Florida has enjoyed a substantial increase of shoppers drawn to the mall by its most successful attraction ever "Aventura Station" - a huge free standing model train display, prominently displayed in front of one of the mall's many anchor department stores.

The innovative vision of the mall's corporate directors - always staying ahead of the curve, is underscored with the ongoing success of this one-of-a-kind, entertaining classic toy train exhibit. Over the last five years its value has helped benefit both Aventura Mall's bottom line and brand awareness.

Six independent trains wend their way through this huge, island-type layout that is viewable from every angle and the mezzanine above. There's even a trolley circling through a fanciful miniature of the mall where the latest anchor store - Nordstrom is depicted in miniature. Other corporate logos and brands are also prominently featured throughout the display. Everywhere animation,sound and lighting effects reign!

Customized accessories can be found at every turn. There's a gym, where tiny musclemen pump iron, an elegant skating rink, a candy shop surrounded by happy jumping children, and a band-shell filled with moving musicians and a choir singing holiday tunes. On Track1 a train pulls to a halt as a drawbridge with clanging bells opens the path to the harbor where a billionaire's luxury yacht is docked. From the balconies above, a Learjet can be seen taxiing down the strobe-lit runway, while a helicopter roars into life, leaping upwards from its pad. Adding to the fun is a complete animated amusement park,the roller coaster is an especially big crowd pleaser.

Aventura Station is entirely automated, including rest periods for the trains and a daily timer that controls the day-by-day on/off times for an entire holiday season. Built in detachable modules, the layout can assembles at its holiday berth in just one night. With minimal maintenance, the layout can run for months at a time. Finally, it can be disassembled and trucked away in less than six hours until next year. It's almost as simple as packing away the toy train under the tree, ready to serve again when the holidays roll around next year.

“I am pleased to express our appreciation and satisfaction with the amazing success of ‘Aventura Station’ model train.

Model trains are always fascinating and the appeal to our shoppers is undeniable. This fascination with the model train has resulted in added publicity for the mall highlighting the ‘Aventura Station.’

It is our goal to generate an unparalleled experience for our shoppers so they want to spend more time at the mall and patronize our shops, restaurants, and theater. We promote a family friendly atmosphere and feel that the model train layout not only attributes to our success but during the holiday season adds to it.”