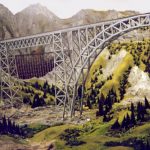 The Great Train Story, one of the world’s largest HO scale model railroads, depicts modern rail transport and its varied functions. Thirty-six independent HO scale model electric trains roll across America, from the seaport of Seattle to the great metropolis of Chicago, passing through a number of other environs en route.

With the help of corporate sponsorship, the museum's objective has been to educate the public to the key role modern rail plays in our everyday world through this working, animated and interactive display that is both highly entertaining, and fascinating. The entertainment value has helped them considerably in achieving this objective by attracting an ongoing, very large draw. In fact, this display has been one of the museum’s most popular since it opened in November, 2002.

From the interactive features of the seaport at Seattle, over the Sierra Mountains and the redwood forests of Washington State, the numerous trains on this multi-track layout rumble through the Colorado Rockies, then give way to the plains of Nebraska and Kansas, on their way along the industrial belt of the Midwest before entering a stunning rendition of Chicago itself. Along the way, interactive animated accessories teach about logging, tunneling, steel manufacture and more!

SMARTT designed and fabricated all 42 modules of this huge layout at its 7,000 square foot facility in Miami, Florida.

Each module section was designed on a computer CAD system and all components were cut on computerized routers (CNC) with hundreds of related components cut on Laser machines. Once the groups of modules were assembled, and all their track, electrical, and model work was complete, they were delivered to Chicago in batches over a 10 month period.

Replacing the cherished O gauge exhibit that occupied the Museum of Science and Industry’s train gallery from 1941 to 2002 was no easy task. The new HO layout would only be assembled in its entirety for the first time on location in the museum’s exhibit hall in Chicago, half a country away from Miami.

But SMARTT’s modular construction techniques provided the fit, finish, precision, strength, and durability of an aircraft frame, and the craftsmen and engineers at SMARTT completed the final assembly in Chicago brilliantly - in just a very few short weeks.