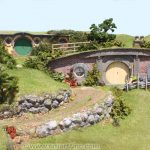 Fantasy Worlds under the Floor

This is truly one of the most unique projects we’ve ever created at SMARTT . While many railroaders are content to own a tabletop layout, or an around the wall, or even a hanging layout, few ever consider embedding one in the floor of their luxury home! This imaginative client did just that, and he chose SMARTT to imagineer the whole thing! We were presented with a huge living room with a concrete floor excavated to an 18” depth. From this beginning we created wonders from around the world AND BEYOND!

Starting in the real world there are replicas of Peru's Machu-Pichu, the Philippine volcano Mt. Mayon, and a meticulous replica of a Philippine fishing village.

Then we depart reality for a tour through the worlds of fantasy, starting with JRR Tolkien’s Shire, lovingly reproduced in two areas spanning 14 feet connected by a river with an operating water wheel. Four different super-detailed Hobbit “Holes” occupy these hills. Further down the track, we encounter the spiky red stone forests of Avatar, where key aerial movie battles were set. In one shady corner the Monolith from 2001 towers over several apes quarreling over a bone. Look hard in another corner and you may see Darth Vader glowering out. Then there is the world of Harry Potter.

In J.K. Rowling’s fantastic arena, the trains start at platform 9 ¾ fronted by a replica of King’s Cross Station in London. Following the tracks leads to a pair of caves recreating the pivotal Horcrux search, one cave featuring Harry, Dumbledore and the submerged boat, the other showing the cave of crystals where the Horcrux Locket is hidden. Moving along, there is the cemetery where Voldemort was restored to his body in front of the terrifying tomb of Tom Riddle, his prior identity. Next on the path is the paddock where Rubeus Hagrid, groundskeeper of Hogwarts, lives in his stone hut. A little artistic license brings in the Whomping Willow (complete with a tiny Ford Anglia car) as well as Aragog the giant spider and a backdrop of the school itself.

Finally, the train makes its way through Diagon Alley, a thirty-foot stretch crowded with replicas of some of the most famous structures from the hidden London street. The whole Alley is here, rearranged somewhat, with key locations like the Gringotts Bank (topped by a rather angry dragon – the client insisted on this!), all the stores for buying magical wares for school, Olivander’s wands, jokes at Wesley’s, and evil artifacts as well at Borgin and Burkes’. Not leaving a magical stone unturned, the fountain from the Ministry of Magic glows at the center of the Alley. For those bored of the train, a quick hop home is available on the purple triple-decker Knight Bus.

There are classic railroad features as well. A turntable, facades of a machine shop, and other classic train structures leave no-one disappointed.

Though basically a G scale indoor layout, this eclectic masterpiece transcends a multitude of scales, all fitted seamlessly together into the nooks and crannies of the uniquely designed framed squares. Because of the broad range of dioramas and the eclectic nature of the layout theme, the diorama scales vary --- from 1/24th scale for the Hobbit "Holes," and Harry Potter’s Diagon Alley, all the way to Mt. Mayon's scale of about 1:8000 with many scales in-between. Fortunately, the floor support system acts as a view block, dividing the separate vignettes. And there is room to expand --- a sloped track leads to the floor surface level for a planned future expansion through the outer wall and into the garden, revealing a whole new set of worlds to explore!

The entire display is embedded under a layer of ¾” thick removable acrylic Lucite panels framed in fine stained wood. This is the ultimate glass topped coffee table layout – SUPER-SIZED!

Fantasy Worlds under the Floor