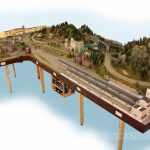 The venerable and popular Central Midland layout designed by John Armstrong, first appeared in the Atlas Layout Book decades ago, and has been repeatedly featured in Atlas publications since then. Of course it wouldn’t be a SMARTT layout without putting in our own magic touches . . .

We have maintained the spirit, look, and feel of the original Central Midland plan, while incorporating all kinds of new and creative features to make this tried and true design even more exciting and different.

We resized the layout to be longer and wider, with a 12 ft x19 ft outer perimeter and mirrored the track plan so that the short leg of the L is now on the left-hand side. The larger space enables us to increase mainline curve radii to a generous 32” – 36”. Broader curves mean that modern equipment, long passenger cars, or large steamers, can run comfortably with a much more majestic look.

The increased size allows for gentler grades (2.1% in visible areas, and 2.3% in hidden areas), with clearance for modern era double stack container cars.

The original CM ran less than 200 feet of track. Our revised design, with two independent mainlines, increases the overall track run to just under 500 feet! To really liven up operations, the SMARTT design includes a new sweeping reverse loop, and bi-directional hidden staging tracks to introduce new trains onto the scene!

Realistic track work was achieved using Code 83 Walthers/Shinohara flex track and turnouts. Most of the fifty (yes, 50) turnouts are broader, gentler #8’s, as opposed to the tighter #4’s and #6’s on the original CM.

The theme of the layout is the Pacific Northwest. The geology and geography, the scenery design, and indeed, many of the city façade buildings, were taken directly from photos of the area. In addition to a few brick and mortar industries serving the added industrial spurs, there are detailed vignettes of a logging operation, a petroleum refinery, and a grain storage facility.

We expanded on the original CM bridges with more complex bridges passing over and under each other. The long, meandering lake graced by all these bridges invites you to jump right in.

Finally, we finished off the aisle areas of the layout with a rich polished rosewood veneer for a fine furniture look. We’ve always pointed out that a model railroad layout is a family entertainment center. This one is already providing many years of enjoyment