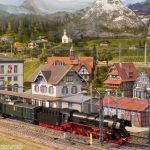 A little European flavor makes this layout different from the run of the mill. This layout is themed around Bavaria in the summer bringing back the nostalgia of the 1920's. Two main lines and lots of hidden track deliver plenty of operational action, in addition to a yard equipped with operating turntable and the cog-line back & forth in the mountains. Both main-lines have catenary across their entire runs.

Small villages and large towns populate the landcape, filled with classical half-timbered buildings typical of the region. In the mountains several castles including a large imposing Schloss dominate the countryside below. Forced perspective is achieved by using a mix of HO and N scale structures. Also present is a detailed vineyard where great German wines are born.

A custom painted backdrop extending the Southern German countryside into the distance completes the tableau.

"I selected SMARTT to design and build my HO scale layout after interviewing several companies that advertised their ability to build 'museum quality model railroads.' It was the right decision. The plan they designed was a vast improvement over my original design concept...The operational possibilities are exceptional.

Although I am located in California, and SMARTT is located in Florida, the project proceeded seamlessly. Frequent emails and telephone conversations -- often daily -- along with photos and videos, provided a continuous flow of information and ideas that allowed the project to proceed with no surprises. Changes along the way that I requested were handled with no difficulties.

The final project was delivered and installed with no problems. The entire staff at SMARTT that I worked with was exceptionally professional and skilled -- all the way from the model makers (approximately 100 structures were built) to the scenery and track builders. SMARTT's expertise in dealing with the complexity of the DCC layout and the software to control it was especially noted. The electronics, including the control panel with track occupancy indicators, and the lighting effects throughout the layout, were all designed and built by the SMARTT staff and demonstrated exceptional skill.

My investment in this project has been well worth it."