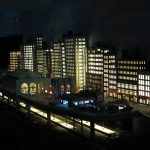 About three years ago I contracted with SMARTT to build a complete HO layout for my personal use. I looked at several layout makers and felt that SMARTT had the best technologies for doing my layout....

Planning the layout was a nice experience. Michael Hart had good ideas of how to fit a lot of action into the space....

We have wonderful scenery with mountains, a dock, a major city, and two small towns, one of which is a very detailed mining town. We have a lot of industry including a steel mill, a refinery, two coal mines, and more. We have a twelve stall roundhouse with a turntable and diesel refueling and repair areas and an extensive yard....

All of this may give you an idea of the extent of the layout but what is really wonderful about it is the great detail.... At my request, the entire layout is also controllable from a computer that can have multiple trains running at the same time with complete safety....The installation was very professional, with a team from SMARTT assembling the layout without issue despite its having traveled across the entire United States... The support after delivery has been excellent.

I doubt that any other company in America could handle a layout of such complexity with such excellent results."