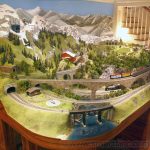 Though model railroad layouts typically occupy a spare room or basement, this little gem of a layout was designed as a 3-Dimensional work of art to be displayed in the family recreational area as a central exhibit for all to enjoy. Small, but intricate, this layout’s original geographic theme was North America, hence the Code 83 track and some stylized American features. Then, early on in the process, the client decided that the places he most wanted to depict were from his family’s travels, so that every family member could re-live some of their cherished memories. To accomplish this change he was in good hands since the expertise of the designers and craftsman here at SMARTT often adapt to a client’s changing interests, midstream. As a result, before the scenery phase began, the decision was made to create a European styled display.

The centerpiece of this layout is an homage to the riverfront of the Austrian town of Hallstadt, a picturesque village on the lake Hallstätter See. Prominently featured are a beergarten (beer garden), vineyards, castles, and an operating ski-lift. There are also romantic vignettes of key family memories. With so many structures, figures, and details, there is always something new to discover.

The layout features an automatic hidden reverse loop for unattended operation via the DCC control system --- perfect for entertaining the guests or just relaxing and watching the trains run. The layout is finished in a polished wood veneer for an antique furniture look.