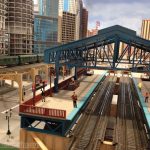 This is another of our blockbuster combo scale layouts that is second to none, built by the dreamers here at SMARTT .This multi-level/multi-track layout features about sixty turnouts for almost infinite operating maneuvers in High-Rail O-scale, delivering lots of action with the utmost realism. While the 3-rail mainline trains wend their way between a number of custom painted and upgraded operating accessories, scratch built structures, and fabulous one-of-a-kind bridges, there is also an independent double-track operating subway serving 2 stations. All of this O Gauge empire features digital control for both Lionel and MTH.

As if this was not enough, one entire wall, over thirty feet long, encompasses an idealized HO scale version of part of the downtown Chicago skyline. Almost two dozen replicas of signature Chicago landmark structures, some reaching over four feet high, set the background of a busy city scene bisected by the Chicago River in the center. Selective compression and creative use of theatrical forced perspective makes everything blend together naturally.

Of course, the Windy City would not be complete without the world famous Chicago ‘EL’. Our model, like the prototype, is double-tracked. Bi-directional automatic operation where the trains make station stops at several replicas of real-world EL stops brings the whole scene to life. Adding to the mix is an operating Faller Car System passing back and forth under the EL and across the river.

Even with all this, there’s room for expansion in the drop-in scenic sections surrounded by the EL. New structures can be swapped in and out of those areas currently left blank as new ideas are requested by the client.

Technology is front and center in this layout. The HO ‘EL’ trains are run by custom electronics. The entire EL itself, as well as significant parts of some signature buildings, were custom designed and fabricated from high resolution 3D printed parts, as well as our usual menu of Laser cut and CNC construction techniques.

Finally a programmable multi-color light set running the length of the perimeter sets the mood.