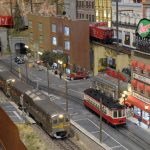 This layout of a lifetime has something for everyone!. Magnificent scenery depicting the mountains of Colorado, towering trestles, intricate bridges, a delightful urban city-scape, and several super-detailed industrial areas, complement a challenging track plan that adds mystery and mystique and will never get boring.

For the prototypical purist, there is a fully functioning signal system patterned after the New York Central Railroad. For the toy train enthusiast, there are several reworked Lionel and other animated accessories that will bring a nostalgic smile to those who grew up in Lionel’s heyday. Realistic mining vignettes and a wonderful rural country scene complete the artistry of this unique project.

But this layout is more than a work of art; it provides challenges to the most demanding operator. There are numerous hidden storage tracks, two hidden helixes, and a complex control panel that indicates turnout position, block occupancy, and signal conditions throughout the layout.

“I contracted with SMARTT to build and install a comprehensive three rail O gauge model train layout that would fulfill my dreams and provide me with many hours of pleasure operating trains on a realistic, complex layout.

The layout has operated flawlessly for the past three years and has exceeded my expectations….

The process I used for selecting the company to build my layout was as follows. First I developed a list of all the features I wanted on my layout and developed my own track plan. Then I sent this information out as a request for proposal to ten different layout construction companies. I received three responses; but only one company suggested that a different track plan would provide me with more interesting train operations than my track plan. That company was Scale Models, Arts, and Technologies Inc. (SMARTT).…

Working with SMARTT was in itself a rewarding experience. The quality of their work speaks for itself, and they were always offering helpful suggestions. The entire staff handled everything in a professional and reliable manner, both during the build, and the support they have provided me thereafter. Being a significant investment, it’s been worth every penny.

I have enjoyed many hours of train operations since the installation of my layout. Truly the layout is a dream come true, that is providing endless hours of pleasure. I do not believe any model railroad builder other than SMARTT, could have provided me with this layout.”