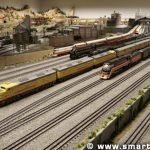 For those who love watching long trains roll by, this layout should exceed their wildest dreams! With over half a mile of track, high speed freight and passenger runs are the mainstay of this spectacular model railroad empire. Though a freelance concept, prototype fidelity is prevalent in all the elements of this fantastic project. Set in the early 1950’s when steam locomotives had reached their zenith and diesel locomotives were coming well into their own, this layout catches every detail of the gritty era.

Broad sweeping curves and vast complex bridges are the order of the day on this showcase layout. No less than three heavy industrial style bridges, the shortest being over twenty feet long, span the highly detailed cityscape that is one of many focal points.

Seventy feet away, in the rugged southwestern style scenery, spectators can fight over a ringside seat as the four independent mainlines converge in another group of intricate bridges that weave over and under one another. Meanwhile, those that miss out on those seats can enjoy watching passenger trains roll into the thirty foot long, ten track station with a glass roofed canopy stretching over six feet long. Or, marvel at the 36 foot long freight yard and complete locomotive servicing facilities for both steam and diesel.

Classic architecture of the era is everywhere to be seen on this layout. Chicago style warehouses based on real prototypes surround the grand passenger station, while the urban area is an original concept embodying influences from New York, Boston, Cleveland, Chicago, and Detroit.

Built on a grandiose scale indeed, this project personifies SMARTT’s capabilities for those high net-worth individuals who already have it all and are seeking the ultimate in a home entertainment investment.