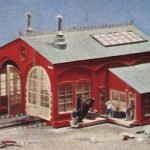 Spotlight Baseball and Trains - as Americana as it gets!  by Ray Del Papa from the April, 2011 SMARTT Newsletter