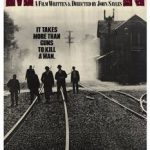 Here is a brief background to the movie. Back in the 1920’s coal miners in southwestern West Virginia were trying to organize into the United Mine Workers of America union. The company, Stone Mountain Coal Co., hired the Baldwin-Felts detective agency to keep the mine non-union. A massacre ensued involving the Baldwin-Felts agents, the miners, and the pro-union police-chief Sid Hatfield. In the end, several agents and miners were killed along with the town’s mayor. The Matewan incident led to an even bigger fight one year later at the Battle of Blair Mountain – the largest armed insurrection on U.S. soil since the Civil War.

The real Matewan is located on the Tug Fork River and along the N&W Pocahontas division mainline. However, the movie Matawan was mostly filmed in Thurmond WV, along the New River, and on the C&O Railroad. The railroad “movie stars” were Nickel Plate 2-8-4 # 765, plus Rich Melvin and his 765 crew. Rich Melvin also is the producer of the Railfan video company, Hope Well Productions.

John Sayles, Matewan’s director, did not think the current town of Matewan would work for the movie (it had become too modern), so he chose the town of Thurmond WV, to shoot in. Thurmond is that legendary town on the C&O railroad where the station, coaling tower, and steam era water tanks were still intact in 1986. This allowed John Sayles, who had a very low budget to begin with, to spend very little money on making a West Virginia town of 1920. Today Thurmond is a National Historical Site and draws hundreds of railfans every year.