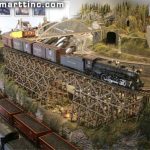 Things to Ponder When You're Planning Your Model Railroad Layout . . Scale by Raymond G. Potter

If you’ve been a train enthusiast for any length of time, you’ve probably become aware that model trains come in many sizes. These are broken down into groups based on what percentage of full size they are. This is called “scale.”

Model railroad scales are represented by one or more letters, as well as a fractional equivalent. For the most part, scale letter designations are standard across the MRR industry. In some cases, the same letter scale may have slightly different meanings in other countries. The most notable of these exceptions are OO (still often used in Great Britain) versus HO, which is more of a worldwide standard. There are also a few other exceptions but we will limit our discussion here to the United States standards. The fractional equivalents of the scale letter designations are as follows. For HO scale (the most popular), the fraction is 1/87. The fraction tells you what the relationship is between the scaled model and the real world. For example, on a 1/87 scale model one foot on a real ruler represents 87 feet of the miniature world. HO is also often referred to as 3.5 mm scale. For train buffs, the scale is also indicative of the specific distance between the rails on the track, also called “gauge .”

Regardless of scale, most model train manufacturers produce their products to conform to a certain set of standards for such required elements as track and wheel gauge, coupler height and size, and overall dimensional tolerances for operating on curved track radii and the like. In addition, many such standards for most scales have been further defined by enthusiast associations. The most notable in the US is the National Model Railroaders Association (NMRA).

Most hobbyists collect what they like best and may have models in several different scales in their collection. When we talk about the layout, the scale will help determine how much detail and realism you can pack into your available space. Smaller scales like HO and N offer the possibility of sweeping curves, tall mountains and towering skyscrapers, but the smaller size means that detail is smaller and, especially in N scale or even smaller scales, harder to see.

Larger scales like O and G allow a modeler to lavish lots of detail in specific areas (like fully detailed buildings loaded with details, eye catching vignettes, and often with fully detailed interiors. But larger scales often require compromise in other areas as available space often comes at a premium. For example, mountains may not be as massive, and running longer rolling stock may require very broad curves taking up a lot of space. If you like running extra long trains, having a smaller space may be a limiting factor.

Additionally, there is less of a selection of off-the-shelf structures and bridges in larger scales as compared with HO and N scale, thereby necessitating more scratch-building or kit-bashing. HO in particular, enjoys a much broader selection of products in every category.

The more cunning modelers use a filmmaker’s trick called “forced-perspective” to create an illusion of depth by using smaller scale structures in the background of larger scale vignettes so that the rearward buildings appear to be much further away from the viewer.

Many railroad modelers have a hard time choosing just one scale. They may have grown up cherishing the Lionel Trains running around the room or watching toy trains in the department store windows during Christmas. But now they are caught up in the mind-boggling variety of choices out there. Without question, HO scale has it all. The myriad of innovative products in HO scale truly can offer something for every taste. Or, if one is really strapped for space, particularly city dwellers living in apartments, the much smaller N scale is often the answer. Like HO, N scale has grown tremendously, and it too has a vast array of available products.

Hard choices? Maybe. But the truth is, choosing a scale that best suits your model railroad dream does not have to be a problem! In fact, you can take advantage of the available scales to create your miniature empire with a little bit of everything. If you have more than one scale that is a part of your collection, it is always possible to have a layout where two different scales are combined. Here at SMARTT, we have built several custom model railroad layouts where HO trains and O trains co-exist side by side. We have also created a couple of model railroad layouts combining O and S scales. Often we have used N scale structures in the background of our HO layouts.

This practice has enabled our clients to “have it all!” For the most part, they are not forced to choose one scale over the other, thereby often being faced with sacrificing something they cherish. Multi-scale layouts are often the answer to this dilemma.

Like anything else, achieving a successful balance with two or more scales requires careful planning and imagination. Separating larger and smaller scales with scenic elements usually works with different scales easily, and country scenery can be a great transition from one urban area in one scale to another.

Also placing smaller scales at a higher elevation than larger scales is an obvious choice where the two co-exist on the same viewing platform. It’s probably not a good idea to put two differently scaled structures right next to each other, but an HO town in one area and an O town in another can work well.

In the final analysis, you’ve probably picked out a scale long ago but the ultimate decider is this: go with what you enjoy. Your train layout should be an entertainment center for years or decades to come. Choose what you will enjoy most, and if you must, don’t be afraid to try combining scales. After all, whatever you do, it is your miniature world!