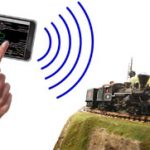 Featured News Model Railroading, not just for tables in your basement anymore... by Raymond G. Potter

OK. You can file this away as things found while looking for other things, but now anyone with a Smart Phone can take the jump into the world of model railroading! And “the pun” of us here at SMARTT  talking about Smart Phones and model railroading IS intended. After all, the second ‘T’ of our name stands for “Technology.”

In order to control a train system from a smart phone, the layout must already be interfaced with a computer that is configured to act as a control system. No matter how smart your phone, this is a must have for phone based control. Your phone will basically be acting as a remote station for the control software. The phone does not come configured with this as standard programming (not yet anyway). You’ll need to choose and install an app that is compatible with the control software you’re using.

Here are a few we found on a couple of generic Google searches. As with everything in today’s digital world, we’re sure the choices and options will only grow, and we will do our best from time to time to update you if we find anything new. Please note that the apps included here count in no way as an endorsement from SMARTT of any product, company, scheme, etc.

Rocrail
Rocrail.net has an open source model railroad control system that remotely controls a layout by computer. The system allows web-based computers to interface with the controlling computer. Want to be in control from your smart device? No problem! Their iTunes app, padRoc will do the trick from your iPad.

JMRI
Another open-source effort, the “Java Model Railroad Interface” group is developing Java based tools to help control model railroads wirelessly. Their software includes an app that can be downloaded to iPhones or Android phones to act as a wireless throttle in concert with a PC running the JMRI interface software. All the documentation is apparently accessible from their site, http://jmri.sourceforge.net/. According to their site, “… Routes & Turnouts are not yet controllable by the app, but this feature will be coming soon!”

Model Train Guide by Deep Powder Software
This iTunes app software professes to be a comprehensive listing of every term you need for buying, selling, and collecting model trains. This could be quite handy for someone going to shows or doing the garage sale route looking for hidden gold.

My Model Train by Handy Games
This is a phone based video game that touts itself as “The very first highly detailed model train simulation for mobile phones.” From the screen shots, it appears that an adorably cute loco wends its way through a 3D side scrolling world reminiscent of Frogger collecting passengers and trying not to run out of supplies to keep going.

From this small beginning, it is clear that model trains and model railroading are truly entering the digital age in a way that both enthusiasts, and anyway else looking for a new entertainment venue can enjoy!

from the June, 2011 SMARTT Newsletter