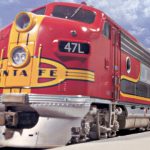 Once again Walthers has tapped into the western passenger train theme. This time it is Santa Fe’s El Capitan. After re-releasing the Super Chief earlier this year, Walthers has returned with the Chief’s all coach counterpart, The El Capitan! The El Capitan ran between Chicago and Los Angeles daily. The new release features one of the most unique passenger trains of the mid 1950’s, a train that would be the forerunner to Amtrak’s “Superliner” fleet of today.

The El Capitan became the first long distance passenger train to use bi-level cars; coaches, diners, and the very exciting “Sky Lounge”, were all bi-level. Other cars in the train featured a standard height RPO, Baggage, and a Baggage-Dormitory. The Baggage-Dormitory car was fitted with a rooftop shroud that transitioned the train’s lines from the standard car profile to the high level profile. This car was followed by a step-down high-level coach. The step-down coach enabled the crew to transition from the high-level cars to the standard level ones.

The Walthers set features the famous War Bonnet F-7 A&B set, arguably the most famous paint scheme ever applied to a diesel locomotive. There are three low-level cars, Bud RPO, Bud Baggage car and a PS Baggage-Dormitory Transition car. The Hi-Level cars are 68 Seat Step down Coach, 72 Seat Coach, the “Sky Lounge”, Diner and a 68 Seat Coach with a tail sign. Look for these cars starting in October.