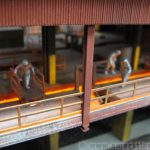 As you can see, we have produced some very impressive and unique models depicting the essence of the steel industry. Our secret?  In a word – research. At SMARTT, we surround ourselves with reference materials and photos that we apply to the theme we are after, while always taking into account the space we have available. Sometimes, usually dictated by space permitting, we can emulate a rendition of a specific prototype facility. Otherwise, we create a freelance version of an industry, but always tying this into what the real industry would require.

The signature structure when modeling the steel industry is the always impressive looking blast furnace. Here I’ll give you two for the price of one as we take a look at two custom built, kit bashed versions we did for two HO layouts.

One of the most challenging models was a blast furnace that had to be revised from the original Walthers footprint; the model had to be a mirror image of that footprint. The cast house was moved from the right of the ovens to the left, as well as the dust catcher, and the washer-precipitator. This was done by laser cutting a new cast house floor in acrylic and cutting several sections of the Walthers corrugated metal walls of the cast house to fit the new floor plan. We then simulated the pig iron flowing out of the furnace by using an electro-luminescent strip that was tinted to the color of molten iron with a translucent gel.

We then added a fourth oven and built the blast furnace itself with duel down-comers. We also added a burn off tower, a Dorr Thickener, a combined Washer and Electric Precipitator, numerous ladders, stairs, walkways, piping, cranes, valves, and lights. The Washer-Electric Precipitator was inspired by a mill at Mingo Junction, Ohio that was featured in the movie “The Deer Hunter”.

This facility also has an Open Hearth Furnace, a Rolling Mill, a combined Blower House-Power House, and other support structures. Some of them are false front buildings.

Another project that included some steel making facilities was modeled after mills along the Cuyahoga River-the Cleveland Flats. This project included a Basic Oxygen Furnace (BOF), as well as Rolling Mill and Blast Furnace.

Since we completed these two projects, Walthers has re-released its steel mill models.  They have added many new features to these kits. Also, for the first time ever, a Hulett has been produced in a plastic kit, huletts were used to unload ore boats.

Next up in Heavy Industry: Coal!