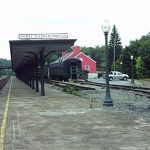 Did You Know . . . About the Railroad Hotel that Doubled as a Cold-War Bunker? by Ray Del Papa

The A-Bomb, the Greenbrier, and the C&O RR

White Sulphur Springs, WV is the home of the five star hotel, The Greenbrier, located in the beautiful Allegheny Mountains along the Greenbrier River. The 6500 acre resort was bought by the C&O railroad in 1910 and remained a property of the C&O/CSX until May of 2009. The hotel is considered one of the best resort hotels in the United States.  It features 7 restaurants and cafés, 3 championship golf courses, a casino, a spa, and one feature no other hotel could ever boast – a former bunker to house the US government in case of a nuclear war!

This destination was a stop for of many passengers of the C&O FFV (First Family of Virginia) and The George Washington named passenger trains. It was also a major facility of the federal government. When the government decided it needed a bomb-proof bunker to house the entire Congress and their staff in case of a nuclear war, it selected the Greenbrier. Ground was broken on the new West Virginia Wing of the Greenbrier in 1957. What that construction was in reality was a front for the new bomb proof bunker that was being built under the wing. The project was completed just in time for the Cuban missile crisis in October of 1962.

For 30 years the Greenbrier kept its secret; then in the summer of 1992, the Washington Post broke the story, and the bunker was compromised. This came a year after the fall of the Soviet Union; therefore it took a back seat to the more pressing problems of the day. Today the bunker is a part of the hotel’s guided tour. Guests are taken down and given the grand tour of the unthinkable — what would have happened in case of a nuclear war. Even though the C&O/CSX does not own the Greenbrier anymore, passengers still arrive by train (Amtrak) in White Sulphur Springs and vacation at the hotel. 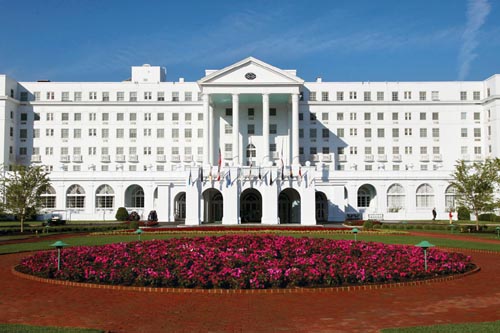 The C&O liked the name “Greenbrier” so much it decided to name its new 4-8-4 (that whole thing about naming anything Northern in the South) after the river. The name Greenbrier invokes three meanings to Chesapeake and Ohio Railroad fans: the River, the Hotel, and the Locomotive; I chose the Locomotive.