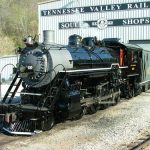 It’s been nearly seventeen years since the end of the Norfolk Southern (NS) steam program, however, that will be coming to an end next week in Chattanooga Tennessee. On Labor Day weekend 2011, 29 years after what can be considered the first Norfolk Southern steam excursion (with the then newly restored N&W 611), the program will start anew. The newly restored, former Southern railroad 2-8-0 630 will leave with its train from the TVRM Grand Junction station. Then it will enter NS main line track for the trip to CT Wye in downtown Chattanooga. This will be the first steam train to operate on NS rails since December of 1994. Ironically it was at CT Wye where the 611 was turned on that last excursion for its trip back to Birmingham, Alabama in December of ’94. These first trips will be 15 miles and last about one and a half hours. 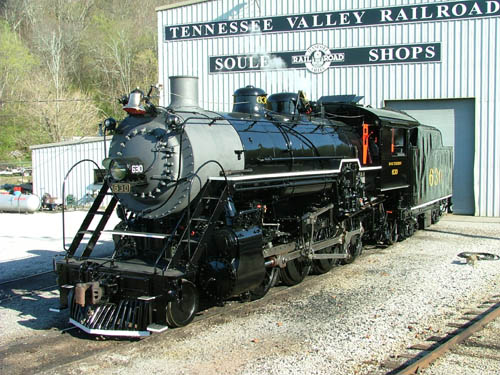 630 after completing renovations. All dressed up and ready to go!
Photo from TVrail.com website

The big question is what will be next; the first trips are just but a tease! 15 miles? 611 could do 15 miles in ten minutes, easy! I was hoping more like a Chattanooga to Atlanta for a first trip, but in reality they just don’t have the power for that. Perhaps once the 4501 is ready, then we may see some more ambitious trips. Remember how the Southern kept looking for bigger locomotives? They tried T&P 2-10-4 610, C&O K-3 2-8-4, and even ran a trip or two with the 4449, once she was released from pulling the American Freedom Train. It was not until K-3 2716, then N&W 611 and 1218 that they had reliable steam locomotives that could pull a heavy excursion train at track speed. Relying on a 2-8-0 for a 100 plus mile trip is risky.

You can’t blame Norfolk Southern for wanting to keep it short and simple; the last thing we would want is a 10 car excursion breaking down on the busy Atlanta Chattanooga main line. That would not be a good way to restart a steam program. TVRM has 50 years of experience in operating steam locomotives, and the 630 and 610 will do fine for the kick off. NS could not have picked a better partner for this project. What the future will bring is anyone’s guess. For now it’s nice to know that this Labor Day weekend there will be a steam train on Norfolk Southern rails.

For you NS modelers out there, and others who model diesel railroads, this may give you the excuse to purchase a steam locomotive and some heavy weight passenger cars. Even if you don’t model the NS you can still run a steam excursion on your layout. UP, BNSF and others still do it from time to time.

For more info about the trips go to www.tvrail.com