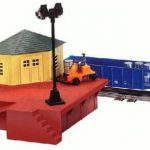 Recently we have been doing upgrades on several O gauge accessories; these upgrades have brought toy train animated accessories to a near scale appearance. The surprising thing for me is how these simple out-of-the-box toys can be transformed into something totally different with just some paint, weathering, and a little detail added here and there. Let’s take a look at one of these projects, the Lionel Oil Drum Loader 6-22997. 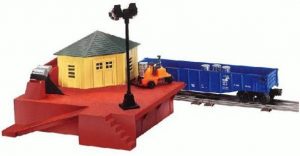 Lionel 6-22997 as seen in Lionel.com’s promotional photograph, straight from the box

First here is what the loader looked like before the modifications (picture- right).

As you can see, this model looks like most O gauge accessories, very plastic with no hint of realism. In this form it’s a toy! Now what did we do to make it look like an operating scale model?

As you can see from below, the oil drum loader looks totally different from when we started. Gone is the molded red and yellow plastic accessory and in its place an operating scale model. It is amazing how a little time (about 8 hours) and effort can transform a toy into something you can be very proud of, a real show piece!