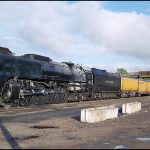 Walters Celebrates Amtrak’s 40th
Walthers is helping Amtrak celebrate its 40th year with the release of numerous items, as well as featuring those of other manufactures.  Walthers is releasing their own model of Amtrak’s P-42; including the retro schemes Amtrak has applied to a few of their locomotives. They are also releasing the original blunt arrow scheme E-8’s from Proto 2000.  Additionally, Walthers is featuring numerous books on Amtrak.

FEC to Return to Downtown Miami
It looks like the Florida East Coast Railroad will be returning to downtown Miami (our neck of the woods), and then into the Port of Miami soon. Money has been lined up, including Federal stimulus money, to rebuild the line from Little River into the Port of Miami. Also on tap for the project is a new container loading yard in the port. The plan is to load containers on flatcars in the port instead of driving them 10 miles to the FEC Hialeah Yard. In order to enter the port, trains will pass right next to the American Airlines Arena, the home of the Miami Heat.  There is also a plan to build a new container terminal inside Port Everglades, a few miles up the road in Fort Lauderdale, Florida.

21 Century Steam
Apparently, Norfolk Southern was very pleased with the inaugural trips of their 21 Century Steam program that took place over the Labor Day Weekend in Chattanooga.  They announced at that Labor Day event the plan to bring the steam program to as many as 21 of their major terminals next year.  We will post the schedule as soon as it is released.

Union Pacific 844
While the big steam news in the East was the return of steam on the Norfolk Southern, UP 844 will be out on the rails in the West.  Below information from the Union Pacfic.

No. 844 will depart Cheyenne heading for the sunny climes of Arizona and New Mexico to help both states celebrate their centennials.

The New Mexico celebration kicks off in Tucumcari on Nov. 4, 2011, with No. 844 then heading to Lordsburg.