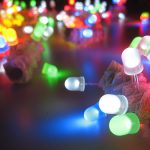 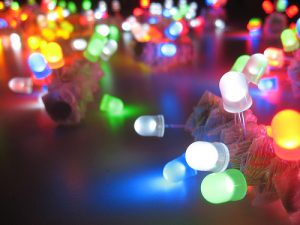 LED’s of all colors unite! photo on Wikimedia by Rabenkin

All in all, SMARTT  has almost entirely moved to LED’s for our lighting needs. Many manufacturers make them and pre-designed multi-LED modular units set for common voltages like 12 V or 24 V make lighting structures a breeze. Gone are the worries of breaking a fragile light bulb or even more fragile Cold Cathode tube. As long as the electrical connection is properly made they will light for years to come.

When SMARTT  installed the layout at the California State Railway Museum, the toy collection for which our layout was the centerpiece was entirely lit by LED strip lights to protect the exhibited toys from dangerous deteriorating effects of regular light and heat.