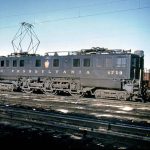 Back in 1931 the PRR took delivery of what they thought would be the main electric locomotive for passenger service on their new electrified lines. The P-5, a 2-C-2 ridged frame locomotive could produce 5300 horsepower and was geared for 100 MPH. However, the Pennsylvania Railroad soon realized that this locomotive would not serve the purpose in was built for, passenger service. By 1935 92 locomotives were either built or under construction, but by this time the PRR had already committed to the new GG-1 locomotive as the queen of the electric fleet. 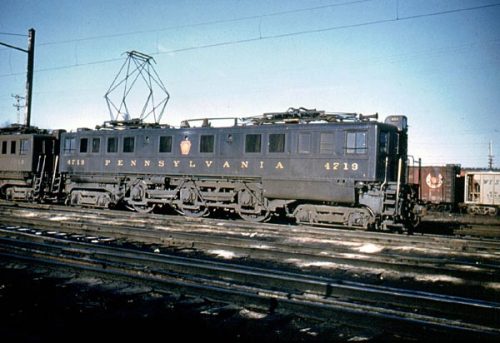 So what was the PRR to do with 92 brand new electric locomotives that could not stand up to the demands of fast reliable passenger service? Turn them into freight locomotives. For the next 30 years the P-5 and P-5a would handle the majority of freight traffic on the electrified lines. A common sight along those electrified lines would be two or three P-5’s nominally with one of the modified semi-streamline version on the point, of a long freight drag. The PRR modified several of these Box Cab locomotives with a semi-streamline cab for crew safety. There was a collision in which the crew was very badly hurt at a grade crossing, as a result, the railroad decided to move the cab to the center of the locomotive, similar to the GG-1.

The P-5’s never received the glamour paint jobs that other PRR locomotives would receive, just Pennsylvania lettering along the bottom and keystone under the cab and on both fronts. They were some of the grimiest locomotives in the fleet, for nowhere on the electrified system was there a facility to wash electric locomotives other at the Sunnyside coach yard in Long Island City. And the P-5’s would rarely enter that location, only when they were pressed into emergence passenger service.

The PRR would eventually get their money’s worth out of these locomotives. They did a yeoman job during the trying times of WWII and the Korean conflict. By 1950, the wear and tear of these times of high demands and little maintenance began to take its toll. In 1951 the PRR took delivery of 10 new experimental electric locomotives; 6 E-2b B+B, 2 E-2c C+C, and E-3b a B+B+B locomotive. These locomotives would become the test bed for the P-5’s eventual replacement, the E-44 in 1960. As the E-44 began to arrive on the property, the P-5s began to be retired.

For 30+ years these un-glamorous locomotives held down the bulk of the electrified fright tonnage, never receiving the glory of their counterpart, the GG-1. For it was the G motors that got all the fame, in art work, models, and preservation. Only one P-5 was saved, the original number 4700 at the Saint Louis Transportation museum. Only one time did a P-5 ever become the subject of PRR yearly calendar art, in 1934 when Grif Teller used 4702 in his painting, The New Day. P-5’s never have been produced as a plastic mass produced model. In Ho scale one needs to find an expensive brass model. This locomotive deserves better!