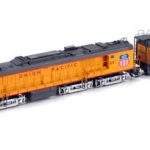 Athearn has released the new UP Veranda Turbine locomotive to its line of HO models. The turbines first arrived on the UP in 1952; some lasted until 1964. They produced 4500 horsepower and burned a low grade fuel called bunker C, a cheaper grade fuel oil that was also used to fuel the power plants of most ships.

Athearn’s new UP Veranda in HO Scale
(photo from athearn.com)

Athearn is releasing this model under the Athearn label and not their Genesis line. The list price is $239.98, without DCC or sound.

As reported last month that the Florida East Coast Railroad was going to rebuild its tracks into the Port of Miami, that project is now underway.  Last week I traveled to downtown Miami following the old FEC right of way, here is a progress report based on what I saw. From the wye at 79th street (were the main line heads west toward Hialeah yard, and the port line continues south) south to 20th, street, tracks were removed and new grading had begun.  In downtown Miami, new concrete ties and welded rail were in place at several locations.  Whenever I hear something like this line was going to be rebuilt, I have always taken an; “I will believe it when I see it” approach. Seeing maybe believing, however I don’t know what is happening in the port itself. Getting into the port is restrictive, so progress on the new container terminal will be hard to document.

Florida to get Second Commuter Railroad

The Orlando, Florida area will be the second location in the Sunshine state to get a commuter railroad, South Florida was the first, and the new operation will be called Sun Rail. The 61 mile railroad will operate between Deland to just south of the City of Kissimmee, a total of 12 stations will be built with an option of 7 more added at a later date.  After stopping Florida’s attempt to build a high speed line from Tampa to Orlando, Governor Rick Scott signed into law a bill funding the new commuter rail system. The bill will also provide funding for the upgrading of the CSX “S” line from Jacksonville to Plant City, plus the construction of a new railroad yard in Winter Haven. CSX clams that this would be a necessity because the increase passenger train traffic will interfere with its freight trains.

MTH has released a set of PRR smooth side passenger cars, however these cars do not match “any” passenger cars the PRR owned. The cars fall into the “shorty” category as an odd or under size car; they measure in at 73’.  Too bad, a 1938 set of Broadway Limited passenger cars would have been a great complement to Walthers’ 1956 Broadway. Plus they could have done these cars in three paint schemes: Fleet of Modernism-1938, post war, bronze gold lettering 1946-1956, and deluxe gold (the Walthers cars) 1956 – PC. Most of the cars types used on the 1938 Broadway were also used on other PRR Blue Ribbon passenger trains until the end of WWII. They later ended up on secondary trains in the 1950’s through the 1960’.
Also of note, I was at the Inter-Mountain web site and noticed that they are once again listing the Centralia Shops HO PRR P-85 coaches as in stock. This would allow PRR modelers to nearly complete other PRR trains by using both the Centralia and Walthers cars. Now, if we could only get Walthers to do some of the other style observation cars….

We welcomed the rerelease of the Bachmann Spectrum Cityscenes building, now Walthers has added another line of city buildings, Lunde Studios. This company lists 6 different HO scale city structures in this month’s Walthers Flyer; Falcon Towers (11 stories tall), Heron Ltd., McAdams Building, Peacock Building, Magnuson International, and the Bon Ton. These kits are hand poured resin kits with most detail cast in place; they range from $39.95-$74.95. These kits will add some variety to the other available city kits, plus give us more option for kit-bashing. This would be right up Rod Stewart’s alley, excuse the pun!