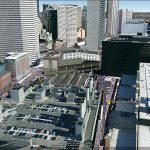 In the digital age, information is literally at our fingertips; sometimes way too much of it, so making the best use of our time means knowing where to look first. Occasionally we’re called upon to design a layout that recalls or even closely imitates a real location on earth. This has come up in designs recently, but we have been faced with this issue as far back as 2006 when we were called upon to recreate an area of Puerto Rico called Old San Juan. On this job, we needed to create a layout that was representative of the town, but fit into a limited space. We had a list of buildings that were desired and an idea of what details were not relevant. Our first step was Google Earth, a very powerful free program available online. 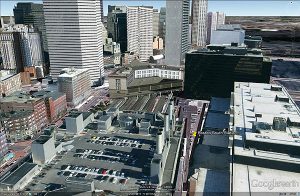 Boston captured in 3D via Google Earth’s 3D buildings feature, saved via the save image feature.

We began by loading up Google Earth and comparing it to the drawing of the city we were given. Right away, we saw that there were locales in the old town that could easily be compressed or eliminated, like parking lots and extensive grassy areas. One location was a construction site that was not yet finished, but was not considered a key landmark. Other locations were extensive asphalt parking lots. From here, we made the determination of which areas we could selectively compress. We then studied the arrangement of buildings and their relationship to each other to choose the best way to maintain the feel of the area.

A few structures were huge, but very bland and repetitive. The client wanted them included, but they did not need to dominate, so we took the footprint of the building and made it smaller, reducing width and length then reducing height (by removing repetitive floors). One example of this is the Housing Department building, a 1960’-70’s era building with a metal screen covering all the windows along its long face. On the other hand, the Capitol building, an imposing stone edifice in the classical style of such structures was kept full size with as much ornate detail as possible packed in, because it was one of the client’s key structures.

From the client’s priority list of buildings, we knew the ones that would be most distinctive and visible. While the client provided many photos of key locations, more reference material is almost always a plus. Here is where another Google Earth tool came in handy: Location photos. This tool marks locations on the map that visitors to the region have photographed and uploaded to Google. This is a remarkable collection of eye-level pictures of many key structures and areas. The usefulness of the pictures will depend upon the photographer. Popular structures and scenes will likely have many more photos from which to choose.

In terms of the buildings themselves, Google’s satellite images give an additional boon. While many photographers capture the front, side, even alleys of structures, few if any show the roof. The satellite pics give detailed images and insight into what goes on top of the structure. Frequently there are AC units and vents, but other features that might be there include elevator shaft toppers, walkways, perhaps even rooftop gardens. This is all detail that makes the difference between an average model and a museum quality replica.

The satellite pictures also give great insight into how streets are arranged, how wide they are, and what occupies the empty spaces between structures. In Puerto Rico, some of the streets were cobbled, while neighboring streets were paved. After all, when capturing an area from real life, you need to recreate the whole environment that structures sit in, not just the structures themselves. Satellite photos are great for showing the extent and detail in rail yards as well as city streets. Want to know how to lay out farm fields for a realistic countryside? Just look at satellite photos of farming areas.

Another more recent job required more information than a flat satellite image or side views could provide. We needed to recreate Boston’s South Station for a client. While street side views and internet photos gave adequate pictures of the station, both modern and historical, there were walls that were not photographed at all, including the side facing the platforms, that made it difficult to discern the building’s shape at the rear. Google Earth to the rescue with 3D buildings! Many visitors to the site have used Google’s Sketch-up utility to make 3D models of structures around the world, and these virtual structures have then been added to the site for everyone’s enjoyment and edification. Fortunately, Boston South Station was one of these structures. By rotating around the building with the 3D orbit view, I got a much better idea of the relationship of the structure’s rear walls to the roof and the enclosed pavilion beneath. While the photos used to map the 3D sides may have been repeated from the front or sides, they were more than enough to give me a good direction to go in for filling in the missing walls. Obviously, this information is only as good as the information the 3D artist had to work with in making his replica, but it was a great springing off point to finish the design.
A few tips to get the most out of Google Earth

All this only scratches the surface of what a useful tool Google Earth really is. Experiment for yourself, and discover the vast reserve of free knowledge waiting to help you make your next project even better.